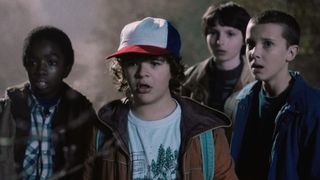 Have you watched Stranger Things yet?

If you’re a modern person who likes stuff on the internet, there’s a high chance you’ve probably binge-watched Stranger Things in a single weekend, surrounded by crisps and milkshakes and wishing your childhood had played out against a backdrop of dodgy mullets and double denim.

The 80s throwback series, which is equal parts E.T., Stand By Me, Twin Peaks and Super 8, has captivated Netflix viewers and reached hype levels that could rival Breaking Bad. As well as its perfectly curated retro cinematography, the soundtrack is a big talking point. The likes of Foreigner and Corey Hart provide the punctuation to a synth score written by two members of a previously unknown band from Texas – SURVIVE.

Team Rock caught up with synth geniuses Kyle Dixon and Michael Stein to find out how they helped make Stranger Things become the best thing on TV since Walter White got busy in a motorhome.

Is film scoring something you were even considering before Stranger Things directors, the Duffer Brothers got in touch?

Kyle: “We’ve wanted to do scoring work for as long as we’ve been making music, we just never really knew how to get into it. We record stuff all the time that’s not necessarily suitable for a record but we know would be really good in a film or TV show. We had years of music sitting around waiting for this moment so we were able to use some of this stuff to get the pitch. It’s definitely something we’d been thinking about but we never had an opportunity up until this point.”

Michael: “We’ve been cataloguing stuff. We had folders and subfolders of stuff we thought could work for film in certain ways.”

Are you a fan of the horror and supernatural genres?

Kyle: “We definitely don’t want to be pigeonholed into doing only that kind of work because I think we can make music that would work for any type of movie, but the general aesthetic of the band nods in that direction so it makes sense that someone would reach out to us to do that type of work.”

How did the directors describe what they wanted you to do? Did you start working around individual characters or plotlines when composing?

Kyle: “A bit of both really. The early pitch work and the demos, some of them were based on characters but a lot of the stuff that we did early on, before we had a picture or a script or anything, we’d either focus on a character or a type of scenario. We tried to figure out what kind of style they were OK with doing without doing the whole cheesy thing. Especially in action scenes, [we thought], ‘How are we going to do that without really cheesy fast drums that are in every film?’”

The visuals and pop culture references in the show, like the Dungeons and Dragons game the kids play, are purposefully retro, but it sounds like you wanted to avoid cliches?

Kyle: “That was the goal. Obviously it sounds like an 80s soundtrack, everyone’s saying it’s a retro thing. But there’s a version of that that’s kitschy, and we tried not to do that.”

Michael: “There are ways to ride the line of it to make sure it’s not over the top. [The directors] knew what they were doing with the nostalgic thing and they requested that we keep it a little more mellow. But that’s something we wanted to do too, we didn’t want to push it over the line and make something that was too cheesy.”

Was there a character or plot point you found easiest or most enjoyable to write for?

Kyle: “I enjoyed writing a lot of the kids stuff, generally when I’m trying to write music it’s kind of dark. But I also really like warm and fuzzy melodic stuff and I never really had an excuse to write that kind of music, so I enjoyed doing that. Also making the dark and evil scary drums and weird noises, that’s obviously something I like to do. That was a nice refresher for me.”

Michael: “I’d say the same. Anything that allows you to be in a different comfort zone and you can expand on what you’re used to by writing something cute, or doing a lot more atmospheric stuff.”

Are there any films you’ve seen where the soundtrack really stuck with you?

Michael: “Anything I think of isn’t relevant to the show, like Hackers, that’s all techno. I think we were subconsciously influenced by that stuff. I’d be watching Spielberg, Stephen King and [films scored by] John Carpenter. We’ve said a lot of times that we like a lot of scores by Tangerine Dream, but we weren’t so aware of them until we got older. The stuff I liked as a kid, I’m not sure. I’m definitely not going to do anything I heard in Lethal Weapon like the sexy saxophone!”

Kyle: “I think that John Carpenter influenced me very indirectly because a lot of the rap music I listened to growing up is very inspired by some of his music from the 80s, the horror thing, but I didn’t know that. I just thought that’s what rap sounded like. I found out later that that’s where that came from. I’ve always been drawn to the creepy little half steps and weird piano and misty synthesisers.”

Did you have any involvement in curating the soundtrack other than the stuff you wrote?

Kyle: “No, all the placements were handled by the music team. They did ask us for some suggestions and we made suggestions but they didn’t end up using them. The stuff they picked is kind of similar, they used some Tangerine Dream and New Order and Joy Division so that’s cool. It’s funny because some people have been like, ‘What did you guys use on episode four with the guitar?’ Er, no that’s New Order.”

What’s the newfound attention like since everyone found out you’d done the music? Did you anticipate the series would be such a hit?

Kyle: “We definitely expected it to be a bigger deal than anything we’d done prior, but not on the scope that it is. It’s outperformed everyone’s expectations and everyone’s really happy about that. I don’t think anybody was really ready for that or expecting it to do as well as it’s done.”

Are you hoping it’ll lead to more scoring work and make more people aware of you?

Kyle: “That’s already happened, we’ve got a wider audience. The band’s doing a lot better. We definitely want to keep doing more scoring work. It’s what I’d like to focus on as well as making records and other music too, but I hope scoring will allow us to do that stuff as well and make it more accessible.”

You’ve got an album coming out soon, haven’t you?

Kyle: “We signed a deal with Relapse earlier this year to put two records out, one of which is coming out on September 30. It got announced right after the show came out which was really good timing. We’ve got most of the next record finished, so that’s a priority in the interim between this [album] and whatever the next job is, we want to finish the next SURVIVE album. We’ve got some more to do on the soundtrack. The immediate focus is to get that wrapped up so we can release it. Then we’ll probably go on tour, then finish the record. Relapse aren’t releasing the soundtrack, but [Stranger Things creators] haven’t announced what label they’re partnering with yet.”

Kyle: “There should definitely be a second season so we can have some more work! I think they could leave it alone at the point that it is now, but they’d be silly to do that.”

Kyle: “I’d be surprised if they didn’t. Oh, you’ve got a great thing going, let’s just quit while we’re ahead… I mean, that’s sound logic in some situations like poker, but this isn’t poker.”

SURVIVE will release their album through Relapse on September 30.