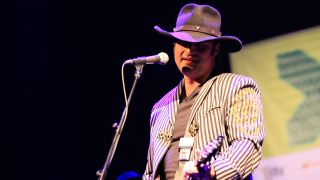 Machete and El Mariachi director Robert Rodriguez is keeping busy lately, having just wrapped the third season of From Dusk Till Dawn, a TV series expanding on the horror franchise led by his 1996 movie of the same name. Exploring vampire conspiracies in the quaint setting of his home state of Texas, Rodriguez is not only a director, writer and producer, he’s also well acquainted with the guitar, playing in his own Latin-infused rock band Chingon. Rodriguez tells Hammer how heavy music has inspired him – and provided his work with a totally badass soundtrack.

How’s the new season of From Dusk Till Dawn looking?

“It’s so awesome. I really enjoyed season two, and it now feels just like a film where we keep going through this insane story. This feels like the third act – to pay off all the things we did in season two – so it’s really fun. There’s a lot of questions answered, but we’ve raised new questions too.”

Is it safe to say it’s metal as fuck?

“It’s really in-your-face, so it’s just like heavy metal and hard rock. We’ve taken our cue from the fans that loved the movie and from the good characters, plus I love the movie myself so that helps. There’s so much in-your-face action and crazy situations that really crank up the intensity, so everything that’s at stake is quite realistic but we still have great fun with it.

It expands a lot of the ideas that the film had in the first place – we’ve added some crime thriller here, and more vampire action and mythology stuff there, then just crazy shit like big scary rats! We really go all over the place. We have a lot of freedom to explore, so it makes for really creative discussions when we sit down and talk about what we haven’t done yet. We’ve managed to do things we’d only dreamt of doing in season two – just like season one opened a lot of doors for season two. So, we do save things on purpose – we have to explore it all.”

What does metal mean to you?

“Music is a huge part of my life, because I have my own band and we do a lot of the music in the show and in my movies. I gravitate towards those spaghetti Western and hard rock sounds, with heavier guitar elements thrown in. In season two’s last episode, there’s this huge musical number where there’s a band on stage – that’s my band Chingon! There’s a big kill scene going on around them, and they’re scoring the scene as it happens. We’ve used a really hard rock sound with some Spanish elements as well, with something of a rockabilly scene going on. Scenes like that are orchestrated much like a musical – a very bloody musical! Heavy metal and hard rock with a Latin flavour really encapsulates the feeling of the show. It’s so fun when you come up with a song and you know exactly what scene to do around it, like turning it into a huge musical number. It really helps cap the season off in a big, strong musical way.”

Are you a big fan of the classics or can we find you moshing to black metal?

“I lean more towards the heavy metal and hard rock legends like The Rolling Stones and The Eagles than the darker side of metal. I grew up in San Antonio, Texas, which is a massive rock town – rock bands would always come to us, and we always knew they’d put on a great show there. Later in life I headed towards bands that had a strong Latin influence, but were still American bands with a hard rock sound – Texas is a big melting pot of music.”

What’s the heaviest album you own?

“I used to think AC/DC were crazy, I found them when I was 12 and I was convinced they were the heaviest thing ever. I owned Iron Maiden’s Piece Of Mind on vinyl and I adored it because of Eddie on the front cover, not to mention The Trooper is on there.”

What was the last gig you went to?

“I’ve started going to see older legacy bands before they get old and pass away – I keep trying to catch the ones that are touring for the last time. Most recently I saw Guns N’ Roses’ first reformed show in Los Angeles. It was a great show, and luckily it was the one before Axl Rose broke his foot. Last year I went to see The Rolling Stones, John Carpenter and I was even lucky enough to catch The Eagles just before Glenn Frey died. I know Slash through mutual friends in LA. We always catch each other at events and horror movie stuff, and he once got me tickets to an awards show when he got an award for something. I met The Eagles, The Stones, I even met Robert Plant too! Plant used to live in Austin and I never bumped into him, but I had to go and see him this time, and I was so happy to talk to him afterwards.”

Why do you think horror and action movies work so well with metal soundtracks?

“As a musician myself, my appetite is hard-edged and instrumental – so musicians like sharper music in action and horror movies because the extreme vibes work best together. Whenever I meet musicians, they always say they want to be filmmakers, and filmmakers always want to be musicians – we always envy each other’s jobs. It’s funny going to meet musicians – all they want to talk about is movies and cameras, and all you want to talk about is what guitar they’re playing. I answered that dilemma by being both.”

Imagine your life is an action movie – what’s playing while you’re slaying?

“My own score! I make everything myself, so I’d make it as heavy as possible, but with just enough of a melodic hook to keep you wanting more. I much prefer custom-making things for movies these days. It’s much better than if you’d just bought a song and left it at that. I love gaining inspiration from songs I like, but I always want to make my own original piece, and it’s really gratifying to know that piece of work is mine. I can use it in my home movies and I can play it when I’m on stage, it’s always there.”

From Dusk Till Dawn the series is out now on Netflix.

From hardcore to horror: Why Gallows' Lags soundtracked The Herd