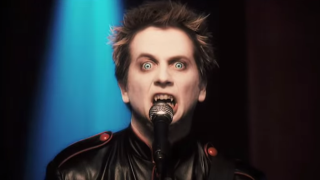 Metal and horror go hand-in-hand. Just look at Marilyn Manson, Slipknot, Black Sabbath, Alice Cooper, Satyricon – all people you don't really want to bump into in a dark alley. Another thing horror goes hand-in-hand with is movies, right? So let's just go ahead and say that metal and horror movies go hand-in-hand too, yeah? Good, glad we're in agreement. But if we're not, then here are the ten heaviest rock 'n' roll horror movies to prove our point...

You’re probably aware of the phenomenon of backmasking, but in case you’re not, we’ll tell you – it’s basically when you play a record backwards to reveal a (usually Satanic) hidden message. Trick Or Treat concerns the last record of a recently-deceased musician and the evil that is released when it’s played backwards. Said evil being the subsequent resurrection of the singer and the ensuing murders that occur. Look, what we’re trying to tell you is that you shouldn’t ever play a song backwards, because bad things will happen. We played S Club 7’s Reach backwards the other day and we woke up five hours later covered in our own shit.

This is the least heavy film on the list, because our maniacal killer prefers rockabilly-type music to out-and-out metal. However, there is absolutely no way we couldn’t include it because he has THE most metal guitar we’ve ever seen. Not only does it look like something out of H.R Giger’s nightmares, it’s also got a sodding drill on the end! A drill which our nutjob uses to ruin a slumber party (hence the title), although if he turned up at our next sleepover, we reckon he’d make it.

Nazis, werewolves, Hitler, killer dwarves, rednecks, perverts and a zombie metal band? Sounds like a night out in Blackpool, but it’s not – it’s the various characters included in Hard Rock Zombies. The film surrounds a band that visit a small town and are subsequently murdered by the Nazis (obviously), but don’t worry, they’re resurrected as zombies and they come back to fight Hitler and his werewolf wife (again, obviously). It doesn’t make a jot of sense, but when you’ve got this much bollocks going on all you can do is embrace it. Embrace the bollocks, basically.

To all you struggling musicians out there, we’ve got some advice for you. Not drawing the crowds you want? Can’t get a record deal? Nobody buying your CDs? BECOME A VAMPIRE THEN. It’s as simple as that, or at least it is for the band in Suck. In a nutshell, the band are doing crap, then they become vampires and hit the big time. Which is obviously what happened with Cradle Of Filth, right? The film also stars a host of rock alumni, like Alice Cooper, Iggy Pop, Henry Rollins, Dimitri Coats and Alex Lifeson from Rush, so there.

This is basically the Guitar Wolf movie. It’s about a bloke who is given a magic whistle, which when blown during times of trouble calls upon Japanese garage-punk band Guitar Wolf, who then subsequently save the day. Only thing is, in Wild Zero, the ‘times of trouble’ don’t include needing them to come and fix a broken washing machine or passing a roll of toilet paper through the bathroom door because you’ve run out, they include ALIENS TURNING THE WORLD INTO ZOMBIES. So a little more urgent, in all honesty.

JUST WATCH THE CLIP BELOW PLEASE. IT TELLS YOU ALL YOU NEED TO KNOW ABOUT THIS FILM.

You know what they say about music turning kids into monsters? Well, watch Black Roses and you can see that saying being taken literally, as a new band comes to town and actually turns the kids into slathering demon-like creatures, much to their parents’ chagrin. Of course, these monsters look like Power Rangers cast-offs, but still. Regardless of the quality of the special effects, the quality of the soundtrack is top-notch – it contains songs by King Cobra, Lizzy Borden and Tempest. If you can find it, GET IT.

It’s a well-known fact that a couple of people in metal bands are actually properly mental in real-life. Rocktober Blood demonstrates this by having the lead singer of a band go on a murderous rampage. He’s eventually caught and sentenced to death, but two years later it all starts happening again! Is he back from the dead? Or is it a copycat killer? The only way to find out is by watching the film, which you won’t ever do, so you’ll never find out, sorry.

Oh, or there’s that ‘Google’ thing you could use.

Would you sell your soul for the chance to become a megastar? Yes, of course the answer is yes, jeez. Well, rockstar Angel Martin does exactly that in Shock ‘Em Dead. Only thing is, this being a horror film, everything doesn’t end up hunky dory, and shit starts to hit the fan quicker than time you pooed yourself in a wind tunnel. The guitar playing in this flick is excellent, main reason being it’s actually Michael Angelo Batio who’s doing the shredding, which is nice.

Hey it’s Alice Cooper again, this time playing a werewolf that’s made out of Play-Doh (as you can see in the clip). Ok, he only plays the werewolf in the last five minutes – the rest of the time he’s playing to type, as a rockstar. We’ve just spoiled this film right there for you, but it’s pretty hard to spoil a film that’s already as crap as a Tesco bag full of dog turds. Still, it’s Alice Cooper and he’s on the soundtrack – the film even opens with him performing a music video, which doesn’t make much sense. But then nor does the rest of it. Don’t watch it. Wait, why have we included this here? Give us a break, we ran out of ideas at number ten…