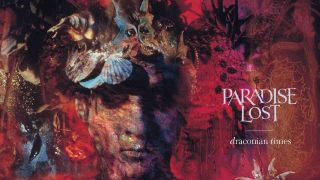 “You know what I think about when I look back at that time?” asks Paradise Lost guitarist Gregor Mackintosh. “I think of frivolity. We’d had some success, and that meant the budgets were increased, which led to a lot of wasted time in the studio.

"Our manager won’t thank me for saying this, but we were based for a while at Ridge Farm Studios [a residential complex in Surrey], and also in Great Linford Manor [Milton Keynes], where we lived in this exotic gothic mansion for what seemed like months. We worked

It’s a far cry from the band’s beginnings, in Halifax, back in 1988. That’s when Mackintosh, fellow guitarist Aaron Aedy, frontman Nick Holmes, bassist Steve Edmonson and drummer Matt Archer dreamed of using musical aspirations to spread their ‘miserable mentality’ across the globe.

If their first two albums, Lost Paradise (1990) and Gothic (1991), set the tone with a sludging doom-laden heaviness, then 1992’s Shades Of God proved this band had more to offer than underground ideals.

Their fourth release, Icon, saw them lashing melancholic, dark principles to their doom roots. It also introduced producer Simon Efemey to their world, the man who played a key role in shaping Draconian Times.

“It was all a blur back then,” sighs Mackintosh. “We did the Icon album with Simon, then went straight on tour, came off the road and seemed to go right back into the studio.”

And between the two albums, the band had to face up to another shock: Matt Archer quit.

“We’d never had a line-up change before,” admits Holmes. “It panicked us a bit. So we wrote the whole of the album without a drummer. We used a crappy drum machine, the sort of thing Bad News would have used. It was really odd, but we got the whole thing done, And then Lee Morris joined us.

“To be honest, we were so inexperienced at the time that we made him a full-time member almost straight away. I’m not suggesting that Lee didn’t earn the right to be in this band, but what we should have done is hire him to do the album and then see how things worked out.”

“Lee was a bit odd at first,” adds Mackintosh. “He wasn’t a Yorkshireman like the rest of us. And that showed in his sense of humour. He thought it was funny to hop around with a video case on his head, or to burble inanely in his Black Country accent. It bemused the rest of us.”

And Morris, who left Paradise Lost in 2004, also took an ill-advised bet from the others.

“Ridge Farm had a rancid swimming pool. It had what seemed to be a thick skin on top, and must have been full of the most awful things – no-one had been in for ages. You had to be mad to jump in. So, after a few pints we bet Lee £50 that he wouldn’t jump in – he did.

"And, as a result, got some form of skin disease. He wasn’t well for a while. It was really stupid of us, and it was the middle of winter, so the water was probably freezing. Still, he got the money. Well, almost. Typically, Nick just gave him a bit of loose change…” Morris, though, wasn’t the only band member to profit from a dip, as Holmes explains:

“We had a photographer come down one day, who told Steve that he’d give him £50 if he could get a picture of him in the pool. So, in went Steve, we handed him a bottle of Jack Daniel’s, and the photos were done! The guy did give Steve the cheque, but you should have heard him moan when it was cashed. He thought it was gonna be framed or something!”

Insanity seem to be a permanent guest during the recording of the album, which happened between January and March 1995. Producer Efemey was beginning to show signs of strain, something that would become more obvious shortly after the recording sessions had been wrapped.

“He was a real character,” recalls Mackintosh. “Simon brought the personality to the sessions. He’d always been very loud, but was starting to get even more outrageous than before. We’re all rather reserved in this band, but Simon would do things like rush into the middle of a group of people he didn’t know in a pub, and drop his trousers!

"It was very funny but a little odd. I suppose in hindsight, those things were signs that he was cracking up a bit. Mind you, at the time he just seemed like a slightly more extreme version of the man we knew from Icon. I suppose work pressure had a lot to do with it. He’d gone from recording us to The Wildhearts, then straight back in with us. Very hectic, and enough to get to anyone.”

Holmes also recalls their producer at the time with a sense of amusement and bemusement. “He had photos of things he’d done while working with The Wildhearts which just floored us. Like a pool cue rammed up his arse, and him shitting in pitta bread (the latter was almost used as the cover for The Wildhearts single Greetings From Shitsville, but was ultimately thought too extreme).

“It was a case of right album, right time, right place,” believes Holmes. “Sure, it’s a very good record, but I’m still surprised that it has become so influential. I listen back now and, while I am proud of what we did, I have to say it’s not as good as so many others believe it to be.”

"But I have to say nothing affected his work on our album. The sessions were still great. It was only later on that we found out he’d, erm, gone off the rails, and turned his whole life upside-down. We decided to put it down to a mid-life crisis.”

“I saw him at Download this year (2005) for the first time in ages,” adds Mackintosh. “He came backstage to say hi, after our set, And it was really great to see Simon looking so well.”

For the guitarist, the fifth album of the band’s career was the culmination of the experience they’d got with Icon. “It was definitely along the same lines, although more polished. We tended to do records in pairs, and the second one gets the benefit of what we’d learnt with the other one. So, we had the same musical approach, the same producer, and it was always gonna be more polished. I wouldn’t say that we knew what we were doing, but we could give that impression anyway!”

Draconian Times was released in June 1995 to enormous expectation. The buzz built up around the band over the previous few years, now erupted into a full Messianic chorus of acclaim.

Saleswise, Draconian Times easily outstripped anything that had gone before from Paradise Lost; it was also their first chart album in Britain, reaching Number 16, which still remains their highest position on these shores.

“It was our biggest seller at the time,” says Holmes. “But our next album, One Second, ~(1997) topped it. However, DT has carried on selling really well for 19 years.”

The impact of Draconian Times even spread to America, where some thought PL were about to break very big indeed.

“I remember Nick and I having a meeting with one of the most powerful people in the music business out there,” recalls Mackintosh. “The two of us sat in his office, and just listened to him going on and on about how he was gonna make us a huge name in the States. We walked out of there, looked at each other, and in our dour Yorkshire way thought, ‘Nah! That’s never gonna happen’. For once, we were absolutely right to be pessimistic.”

“We did get very extravagant. The number of trucks we had out on the road was ridiculous – far more than we actually needed. I can’t even recall how many roadies were working on the lighting rig. But one guy was injured during the tour, and had to go home. Yet he wasn’t missed at all. Because we had more staff than was needed.

“We’d go into catering to have a meal before a gig, and see faces we didn’t know – but they all apparently worked for us. It was crazy. Money was wasted, But then that’s what can happen when you have the budget! We learnt our lessons from that – it won’t ever be repeated.”

It’s now been 20 years since Draconian Times first hit, so is it time for Paradise Lost to consider dusting it down, and perhaps performing the whole album onstage? That seems to be the trend these days. But it’s not on Holmes’ mind at all.

“You mean, the way Slayer recently did with Reign In Blood? Well, I believe that there’s a big difference. Reign In Blood is far and away Slayer’s best album – everyone knows that. But with us… well, I do like Draconian Times, but I really don’t believe it’s the best thing we did from those early days. I’d put Shades Of God ahead.

“It is strange the way that some albums seem to just come out at the right moment. We knew we’d made a good album with Draconian Times, and taken our sound into a more mainstream area… well, not so much mainstream as more metal, I suppose. But I never thought that, a decade on, people would be talking about it with such affection and reverence. And we do owe a lot to its success.