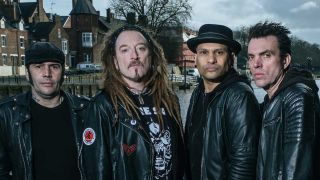 "The world doesn't need another fucking Lord Of The Rings rock band, you know?"

Ginger Wildheart is talking The Wildheart's new album, Renaissance Men. It's a collection that boils with fire and fury, the lyrics a state of the union address for the modern age. From online bullying to the opioid crisis via the state of our public institutions and the nature of modern love, it feels like an album people will one day return to to remind themselves of just how bleak and bewildering life in 2019 could be.

"You know, the older I get, the more pissed off I become," says Ginger, "with the mess the world's in right now under the fucking idiots are leading it. All the older people, who are supposed to know better, are leaving the young to inherit nothing, and if that doesn't piss off parents, then you know what? Fucking fill your boots with Brexit, because that's all people fucking care about these days."

Despite all the righteous indignation burning in the lyrics, Renaissance Men still sounds like a cause for celebration. It's an album that, in typical Wildhearts style, mixes brute force riffing with Ginger's extraordinary gift for choruses that lift the spirit and let the heart soar. It's punk, it's rock'n'roll, it's genuinely life-affirming, and it's very, very good.

"I'm surprised there aren't more bands where aggression and frustration and passion amounts to the sound of the band," says Ginger. "I'm amazed that there's not a bunch of really pissed-off young punks getting it on this.

"Dislocated is about is based on how bullying has turned into a more vicious sport since the advent of social media. I've got three kids, and two of them have been involved in in bullying on Instagram.

"The song was written about a girl I knew who was really affected by some stuff that was being said about her on Facebook, and it got to the point where she was so fed up with it all she was threatening to commit suicide. I stayed up with her all night to talk her down from the from the ledge, so to speak.

"There's real shit going down that's really affecting things, and the song is about that frustration. It sounds as frustrated as it's meant to sound."

"Let 'Em Go is just a simple song about ridding your life of wankers. Not all friendships are going to want to blossom into something meaningful, and a lot of people show their true colours over time.

"My advice would be just get rid of them instantly, as soon as one of them turns into a judgmental prick, or a sexist, or a racist, or a homophobe, or any number of other disgusting social traits.

"That's just us. It's a rallying call that The Wildhearts are back. It was born out of the Britrock tour, where Danny was still on his trial period. It could have gone horribly wrong at any point, but he really impressed us with how much effort he put in, and the fact that we're all still alive to tell the stories meant we should document them and make an album.

"It's just a kind of a "Hey, we're back!" kind of song, and ideally it'll be an anthem one day, but that's not down to me, that's down to the amount of people that sing along to it when we play it live."

"Fine Art Of Deception is just about the cynical nature of love these days. You don't even have to look at the divorce statistics to know that people are not working as hard at keeping relationships together as they are at looking around the room for a potentially taller or slimmer partner."

"Diagnosis is about one of my pet hates – which are increasingly plentiful. It's about the mental health institutions and the medical health profession in this country, and about how it's letting people down. How the system is broken, and how the suicide rate is not getting any less. There's still five and a half or six thousand people committing suicide every year.

"Depression and mental illness isn't an issue that attacks any one type of person. Whether you're homeless – and suicide statistics among the homeless are going up all the time – or if you're rich, or a celebrity like Keith Flint, this illness is taking people out on a regular basis, as much as any other illness that that's getting tons of financial support and funding from the government. The government has pulled most of the funding into mental health research, and as a result people are still ignorant about it.

"A hole in the ground is cheaper than a hospital bed, and I think the stigma hasn't been removed because there's not enough celebrities talking about it. We live in an age when everyone is obsessed with celebrity, so celebrities need to take that into consideration and get behind it.

"I think education is everything. And the more people talk about it, the more need there'll be for education, and the more people will want educating about an issue that doesn't just affect the people suffering from it, but it affects everyone around them. It's just as big an issue as climate control, but year in, year out, nothing is being done."

"The system failed me, and I came very close to the edge. I've had to develop survival techniques of my own to survive, when the system promised so much and then slowly took away that hope.

"And when someone is in a desperate position and their hope is taken away, then they're at the mercy of an illness that wants them dead. There's nothing more important in the world than education on mental health issues."

"Life is an exercise for all the emotions, not all of which are happy-smiley. People think that emotions like sadness and frustration and loneliness are a bad thing and should be avoided.

"So My Kinda Movie is about seeing that your life is fucked up and occasionally very dark. And that's probably the kind of movie you'd like to see. You wouldn't want to see a movie that looks like fucking Facebook!

"It name-checks Takashi Miike, David Cronenberg and Ingmar Bergman in the same line, all of whom offer a very unique view on the world, most of which my life resembles, and probably everyone else's. So instead of wishing for life to be perfect, find goodness in what you've got."

"Little Flower's not my song – it's CJ's song – and I'm really glad that someone in The Wildhearts brought a song to the party, because it's usually left to me to write all the songs, as if I go and get them from fucking Tesco.

"It's a great song. I thought it was about his little boy, but it's apparently about his new girlfriend. He's been through the ringer, poor guy, but he's found this lovely new  girl, and I'm really really happy for him.

"Emergency was was written in the week of Prince's death. He died from the same drug that Tom Petty died from, which is fentanyl. It's a painkiller that's ten times as strong as heroin.

"I know fentanyl because it's taken out heroin addicts with a tolerance for heroin, and doctors – especially American doctors – seem happy to prescribe it to anyone. Before that it was propranolol, which is better known as beta blockers. And that's what took out Michael Jackson and Whitney Houston.

"So they stopped giving everyone that and they give people something stronger, just because their money's on the table. There's this preoccupation that doctors seem to have with just giving people pills and getting them out the room. This is not only killing people, it's killing stars that we love, and when it took out Prince I was like, 'This is an emergency!'"

"No one's held accountable for these deaths, and if that's not an emergency, I don't know what is."

My Side Of The Bed

"My Side Of The Bed is personal inventory: who you are, how honest you are, and how you're doing. It's about being proud of how much work you put in.

"We all know a lot of cunts. When I was growing up, no one was openly racist. Now, in the in the in the wake of Brexit, racism seems to be the popular sport of the moment, and the social leaning to the right seems to be almost fucking trendy.

"You couldn't be openly racist when I was a kid, because you'd get a good beating. And you certainly couldn't be sexist, because Geordie girls would give you an equally good kicking. It wasn't until I moved away from home that I saw a xenophobia that didn't really exist back home.

"The men that I grew up around didn't swear in front of women. They held doors open, and that's something that I still do. I still pride myself on having manners, and I pride myself on always working hard to be a bit better.

"It's got a rude title in the fashion of AC/DC, who always had a soft spot for a naughty Carry On-type title. It means goosebumps, and it's just about that feeling you get from music or from love or friendship... or just taking the dog for a walk.

"Its really fucking important to search for that feeling and not let it go, because once you do that magic will leave your life and you'll forget that you need it. So it's important to keep yourself inspired, and plugged in to the National Grid.