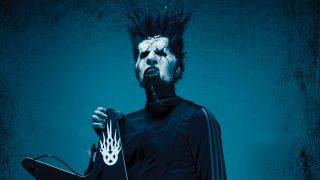 People who knew Wayne Wells say there was a switch that flipped in his head when he stepped onstage. Away from the spotlight, the Michigan-born, Los Angeles-based singer/guitarist was a man of few words, unless you knew him well.

Not so much shy as reserved, taciturn. But once he stepped out there it was game on. His long black hair would be spiked upwards in one electric-shock mass. His voice became a guttural industrial growl. The man who was content to sit quietly and keep his own counsel in private would suddenly become a fulcrum of energy in public. That’s when Wayne Wells became Wayne Static.

“He was quiet as a mouse offstage, then he’d get up there and do the big rock voice, then get offstage and not say a word again,” says Tony Campos, bassist and Wayne’s long-time bandmate in industrial/nu metal heroes Static-X. “He was kind of a timid guy initially, but once you got to know him he opened up.”

If Tony says this with a tinge of emotion, it’s because he’s talking about his friend and sometime antagonist in the past tense. On November 1, 2014, Wayne Wells died after ingesting a toxic mixture of prescription drugs and alcohol, the result of an addiction that plagued his later life and alienated him from his former bandmates.

But his story isn’t over. Static-X’s fractured original line-up – Tony plus drummer Ken Jay and guitarist Koichi Fukuda – reunited this year for a tour to mark the anniversary of the band’s 1999 debut, Wisconsin Death Trip, and a mooted new album due in early 2020.

Taking the place of their fallen comrade is Xer0, a mysterious singer in a Wayne Static mask. It’s equally macabre, celebratory, controversial and downright bizarre.

“This is celebrating the record, and it’s celebrating Wayne,” says Ken Jay. “To remember the good times we had. But this is catharsis too, for all of us.”

Wayne Wells and Ken Jay arrived in Los Angeles from Chicago in the early 90s, just as nu metal was starting to make its presence felt in the city’s clubs. They had met back in the Windy City, when the drummer auditioned for Wayne’s band, Deep Blue Dream.

“I go in and play for maybe 30 seconds and Wayne just stops me,” recalls Ken. “I think, ‘Oh, he hates me.’ And he goes, ‘Ken, we’d pay you to play in this band,’ and that was it. Then we went and had a beer afterwards, and I don’t think he said another word.”

It took a couple of years for the pair to find their place in LA. They called themselves Drill at first, recruiting Koichi Fukuda and Tony Campos and experimenting with a range of sounds from post-grunge to hardcore punk. But things started to shift after they changed their name to Static-X, their new industrial-tinged direction dovetailing with the emerging nu metal scene.

“We got in on the tail-end of that just as Coal Chamber were pretty big, System Of A Down, Snot,” says Tony. “They were all on the cusp of getting deals. We just rolled along with it.”

During nu metal’s blossoming, every band had their USP, and Static X’s was Wayne. With his towering hair and Freddy Krueger-style tops, the frontman was one part freak, one part cartoon character, spitting out lyrics about everything from coprophilia to drug abuse (the prophetic Push It).

It was the perfect soundtrack for the times. Static-X’s debut album, Wisconsin Death Trip, was released in 1999 and eventually sold a million copies – not Korn or Limp Bizkit numbers, but not to be sniffed at.

But success brought its own problems. Tours were long and exhausting. Koichi Fukuda quit before the release of the band’s second album, 2001’s Machine; Ken Jay left before the next one, 2003’s Shadow Zone. Ken is reluctant to go into specifics, but insists that nothing could have prevented it from happening.

“In retrospect, no,” he says now. “In the long run, Wayne made his choices, and me being there wasn’t going to affect that one way or another.”

“There was no rampant use of prescription drugs during the heyday of Static-X,” the band’s former tour manager, Eric Dinkelmann, wrote in a Facebook post in February 2019.

“This was something that really didn’t come into play until Tera came into the fold. No one really goes into the fact that the prescription meds that Wayne was on weren’t Wayne’s. They were Tera’s. Tera got Wayne hooked on medication prescribed to her.”

Tony Campos stuck it out in Static-X until the end of the 00s, but the situation became untenable for both of them. “I never quit, the band just fell apart,” he says.

Private tensions between the two soon turned to public hostility. Wayne claimed their friendship was nothing more than a “business arrangement”, and accused his former bandmate of jealousy after Tera began sitting in on interviews (he later claimed he was joking, though it did little to salvage the two men’s relationship).

It was eight o’clock in the morning when Tony got the call from Wayne’s tour manager to tell him that Wayne had passed away at home in Landers, California.

“I thought it was a fucking joke,” he says. “And then I was just stunned.”

There was one final twist. On January 13, 2016, Tera was found dead at her home. She had taken her own life.

In October 2018, nearly four years after Wayne’s death, the three surviving original members announced they would reunite to mark the 20th anniversary of Wisconsin Death Trip and to honour their late bandmate. Tony and Ken had patched up their differences before Wayne’s death, but this was something more. “It’s all part of a bigger healing process,” says Ken.

While the news of the reunion was largely greeted positively, with Wayne’s family giving it their blessing, there was one huge, jarring note. Rather than bring in an established – and recognisable – vocalist, they opted to enlist a singer they’re only calling Xer0, complete with up-swept mitre of jet-black hair and, most controversially, wearing a mask that looks like a zombie Wayne Static. It was a decision that was viewed in some quarters as misguided at best and a sick stunt at worst.

Tony Campos is politely unrepentant. “Yeah, I can see how some people will be shocked and off-put by it. But once they know what’s going on, they get it.”

Ken Jay has a more strident take on the matter. “Wayne had a terrifically morbid sense of humour. I can honestly tell you he would think this is funny.”

The real identity of Xer0 remains a mystery. The most popular candidate is Edsel Dope of Dope, a band who toured with Static-X in the past and recently opened from them on their US comeback tour. Pushed on who is behind the mask, Tony and Ken are standing firm. “We’re having a lot of fun keeping people in the dark about it,” says Tony.

Either way, the frontman is set to appear on Project Regeneration, a posthumous Static-X album set for release later this year and featuring “unreleased vocal performances and compositions” from the late singer, alongside guest vocalists, of which only Xer0 and Ministry’s Al Jourgensen are confirmed.

“There’s going to be at least seven or eight songs with Wayne’s vocals on them,” says Tony. “And there are five that we developed from Wayne’s last demos. So Wayne’s fingerprints are all over this record.”

But it also carries heavy emotional freight for the people he left behind, not least given the fact that their friendships remained unrepaired at the time he died.

“Had Wayne gotten cleaned up and distanced himself from negative influences, he’d be here with us right now,” says Tony. “We were friends for such a long time. With that path he went down, that changed.”

“If he was here, we’d probably just be sitting around, drinking coffee, watching some stupid 80s movie,” adds Ken. “I don’t know if there’d be much conversation.” His voice suddenly sounds warm and sad at the same time. “But that was Wayne. I’d be OK with that.”

Static-X are currently on the second leg of their North American Wisconsin Death Trip 20th Anniversary Tour in the US.

The band's upcoming seventh studio album Project Regeneration is available to pre-order now and scheduled for release on May 29, 2020.