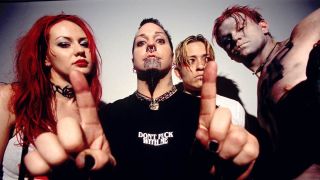 Much has been written of the flannel-sporting, ragtag tribe of artists who would collectively forge the grunge movement in the early-90s, and how the emergence of that scuzzy, stripped-down sound heralded the withering death of glam metal.

By now we’ve all seen the retrospectives featuring the pouffy-haired refugees from the ‘80s lament the arrival of Kurt Cobain and how those jangly opening chords of Smells Like Teen Spirit brought a swift and bitter end to their fame and fortunes.

Very little has been said however, of the ragtag tribe of artists who wandered into the smouldering ashes of the Sunset Strip and rebuilt LA’s decimated rock scene, collectively forging a punishing new style of metal that was every bit as mainstream-friendly as grunge, drawing deeply from influences as diverse as Black Sabbath and Run D.M.C. — the movement simply known as nu metal.

Coal Chamber were one of the first new bands to enter Hollywood’s heavy metal vacuum — a pale and dreary club circuit that had stood as America’s metal Babylon only a couple of years prior. We recently caught up with frontman Dez Fafara, who recalls a grim prognosis for Tinseltown’s rockers.

“The scene was relatively dead,” he tells Metal Hammer. “We were coming out after the hair metal thing was done and killed off. But there was a sense that something new was forming among the bands at that time.

"Up in LA there were the Deftones, Coal Chamber and later on, System of a Down. I’m the one who found Static-X when they were playing in front of fifteen people. We would all go to shows every single night and play with each other and create this new scene together.” That scene would be nu metal.

Like the late ‘80s scene in Seattle, there was more than just a sense of unity among that first wave of bands, but an exhilarating diversity that at once distinguished and inspired the bold new sounds. Likewise, each of the nu metal pioneers brought their own special brew to the table.

Coal Chamber had a way heavier sound with a gothic feel; we were one of the only bands who understood Bauhaus and The Cure as well as we understood Black Sabbath and Ride The Lightning. So we watched everybody come up and get signed and eventually we signed with Roadrunner Records. The rest was history.”

Today, one can hardly get halfway through the phrase ‘nu metal’ without attracting some snarky rebuff. Just like grunge, the first wave of nu metal was invariably followed by a vapid, overly-polished and homogenous wave of bands only too happy to churn out whatever saccharine-tasting pulp would score them a record deal.

Worse, the term would find liberal usage among the media and fans, who used it interchangeably with rap rock, alt-metal and whatever radio-friendly guitar-centred music was shifting units at the time.

Dez however, insists that in the early days, the phrase ‘nu metal’ carried no nasty connotation.

“My guitar player (Meegs Rascón) said it best: ‘nu metal’ was a great term until the second wave of bands came in and we all got put into that ‘nu-metal thing’. At that point, even among us, it became a dirty word. Right now, they call Devildriver ‘groove metal,’ and there aren’t many other bands that get called that.

"So if ten or twenty other bands come out and have that groovy feel and they get big and suddenly ‘groove metal’ becomes an ugly term, do you hide from it? Of course not – it’s something you started. I feel proud that I was part of the scene. I have no room for the fucking purists, so I don’t give a shit. I know that we all did something special and we helped save LA.”

“Clubs started to pack out again,” Dez recalls. “One by one, we all got signed. We were there the night Deftones got signed — a limo rolled up and Madonna rolled through! We were like ‘Holy shit, this thing’s on fire!’ The next one to get signed might have been Korn, then us and then System.”

Both grunge and nu metal would eventually flame out after over-saturation, but the parallels end here, because unlike grunge, nu metal is enjoying a second ‘golden age’, spurred by an avalanche of new releases and tours from the first wave of nu metal, including Coal Chamber’s new album, Rivals. But whatever you do, don’t ask Dez about any revivals.

“Everybody’s asking, ‘What’s up with the nu metal revival?’” he says. ”I’m like, ‘It’s never left!’ Hello? Slipknot: arguably one of the biggest bands on the planet, next to Metallica – nu metal. Korn: never left, bigger than ever right now – nu metal. Deftones: getting ready to come out with a slamming new record – nu metal. System Of A Down: bigger than life – nu metal.

“So when did the revival start? These bands never went anywhere. But since we’re coming back and doing a record after thirteen years, there’s a revival? Those bands are still around, they’re bigger than life and they have influence over everybody. Go ask the guitar player in Suicide Silence what his favourite band is and he’ll tell you Korn. I’d like to think that because of the broad diversity of what we did, now you have all of these metal bands with diversity who sound like they’re doing something different. That’s it in a nutshell.”

Semantics aside, Coal Chamber’s first new album in thirteen years was met with garment-rending joy among their fans, although it wasn’t public pressure that led to the band’s reunion, but something far more random.

Reforming Coal Chamber for a handful of dates, including Australia’s Soundwave festival in 2011, Dez describes how it all went down, saying, “We go to Soundwave and come out in front of 60,000 people and you hear everybody singing Loco. I was shocked. At first I thought, 'OK, this reunion’s going to happen because a), I never want to live with regret; and b) when you hear 60,000 people singing Loco, you think, What the fuck?'"

But if the Australian fans planted a seed, it found fertile soil in a trio of demos.

“Soundwave has these buses that bring you from the festival to the hotel, where you’ve got to pack up and fly out, because you’ve got more shows to do. Meegs is just jamming with his headphones and I asked him what he was listening to. He said, ‘Check this out, it’s some new music I’ve been writing.’

Now keep this in mind, in 2006 we talked about getting back together and they handed me some tunes, and then in 2009 they handed me two tunes that I actually laid vocals on and when I listened back to it, it sounded exactly like Coal Chamber. I thought, I’m not into it, and they weren’t into it, either.

This sounds like our old shit. People don’t know that. So I start listening to what Meegs is playing on his headphones and I said, ‘Dude, if this is what you’re writing… if this is what the maturity of the scale is, not just musically but the arrangements and the sound textures, then I want to lay vocals on it.”

Consumed with Meegs’ demos, Dez asked for all of the material at once so he could write the entire album as a whole — a feat he accomplished in only four weeks. As if to underscore how easily the material flowed, Dez explains, “There was one day where I wrote six tracks, including I.O.U. Nothing, The Bridges You Burn, Another Nail In A Coffin, Suffer In Silence — all of the tracks that everybody’s keen on right now — I wrote those all in one stroke. I hate to sound cheesy, but there was something magical about what we were doing.”

The album has been out for a couple of months and the polls, both critical and popular, have been decidedly bullish. Dez couldn’t be happier, telling us, “Even the most cynical cat who only likes hipster shit or black metal has written me emails saying ‘I can’t get that album out of my car and if I do, my chick and my friends turn on me!’”

Where do they go from here? The possibilities are endless, so long as the band are all on board. “‘Fun’ is an important word for Coal Chamber. We won’t do something if it’s not fun. Right now we’re firing on all cylinders. We feel like we wrote and recorded a great record, we want to get it out there and instead of doing the ‘90s throwback thing, we’ve stumbled upon a fresh new sound due to being apart for thirteen years.”

The band have recently announced a US summer run with Fear Factory and after that, perhaps a return to Australia in the fall. Dez also offers a tantalising bit about DevilDriver.

“I’ve already started writing, actually, but we’ll be writing and recording a new Devildriver record. I’m sitting on twelve blistering tracks. With Devildriver, I’m really looking forward to getting in there and doing a record with maybe a late-summer-early-fall release next year.”

In the meantime, Dez and the band are savouring the moment, having wrapped up a successful European tour and relishing the early response of Rivals. He pauses and says, “When you come together and make a record like this, to hear all this positivity … you start using words like ‘blessed,’ you know what I mean?”

Could this blessing be the start of Coal Chamber’s long-awaited global takeover? Only time will tell. But Dez isn’t slowing down just yet.