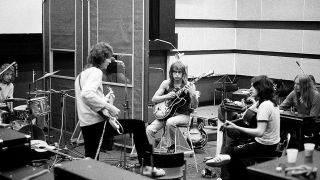 “I grew up in Connecticut and my mom was a hippie and we listened to a lot of college radio and AOR together. I first heard Yes when Roundabout was their big single. In 1978, aged 13, I went to my first ever concert: Yes in Madison Square Garden. It was a school night and everything about it was so exciting, it made an indelible impression.

"I was thrilled to see Rick Wakeman but I was most impressed with Steve Howe, a player so unique but always in service to the song. From the age of 10, I played guitar and my teacher only liked complicated music. We had a schism because I liked a lot of punk rock and he hated that but we both agreed on Steve Howe, and I learned to play Roundabout note-perfect. Later, I got really lucky;  one of my friends, his father worked at CBS and had access to the Yes catalogue for free, which he gave to me.

"What I like about Yes is their approach to atmosphere and melody. Neil Young records are great, but a document of a band in a room. Yes use the studio as an instrument to craft something bigger, to create a transcendent atmosphere. Aged 13, I could be in a suburban bedroom but transported somewhere else – and [Roger Dean’s] artwork certainly helped.

"In the 80s and 90s they dropped off the cultural radar. Then Vincent Gallo used Heart Of The Sunrise in his [1998] film Buffalo ’66. I knew him, and talked to him about Yes; it made it okay for us closet fans to admit how much we loved them. At their best Yes created entire landscapes and worlds like no other. They’ve inspired me in that a lot of the music I’ve made has had the goal of achieving something similar.

"Close To The Edge is my favourite album. I go back to it at least once a month, it has such flawless songs and recordings. Even if And You And I and Close To The Edge were the only tracks on the album it would still be in my top 10.”