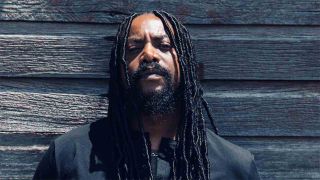 Lajon Witherspoon, frontman with Atlanta metallers Sevendust, is man with a wide and eclectic taste in music. He admits he struggled to pick out the albums that changed his life. “It’s such a hard question to answer, as there is so much music that inspired me, but this is the music that influenced me to be the artist that I have become in this place today.” he says. But he eventually whittled the list down to 10, which he goes through below.

Stevie Wonder – Songs In The Key Of Life

“I remember my Mother and Father playing this and it always grabbed me. It seemed before it’s time, even as a kid, and it just made me want to learn how to play music so I could work out how Stevie Wonder made this beautiful bunch of sounds. Also, the fact that he was a blind man and he could do this was really amazing to me as a child. When we were at the Grammy’s my wife and I were sat one row behind Stevie Wonder and I was just like ‘I’m done man! I’ve made it!’  He’s an amazing man.”

Jimi Hendrix – Are You Experienced

“I wish I could have been a part of, the whole psychedelic era. I was too young to see it but Hendrix sums that entire period up for me. You could say that he doesn’t have the best voice, but his playing and the vocals together just made me want to explore the art of playing and singing, and he really made me want to be in a band. And people need to recognise the rhythm section, one of my all-time favourites, that groove, right in the pocket. You just had to move, the beat was incredible,”

“And then you have this guy comes along, who is like Jimi, but with his own little weird superstar ways of awesomeness as well. From the first album I was hooked, but then when Purple Rain comes along and he’s a movie star as well, it blew my mind! And that’s really him as well, that’s no character, I so wanted to be him. If I didn’t already want to be Jimi I damn sure wanted to be Prince, I just couldn’t get away with those suits! Everything that he touched was inspired, the bad side was great, the nasty side, When Doves Cry, Raspberry Beret… damn! It was all so good!”

“To me this is something I remember hearing as a kid and being freaked out, I never just used to listen to soul in my house, it was country, R&B, rock’n’roll, it was everything, all kinds of music. When I would go to my grandparents house, they would be rocking out and that’s where Sabbath came in. The tones, the guitar, the voice, it all grabbed me when I was a kid. We  got the chance to do the Ozzfest and to go out on an Australian tour with Ozzy and that was an amazing experience – to be out on the road with the singer from Black Sabbath. Who would have imagined me sitting on a plane and going to all these different shows with Ozzy?! What an experience man.”

“The whole Motown movement was an incredible source of inspiration and so many beautiful artists came from that period, but, for me, you put a Marvin Gaye album on and everybody was rocking out. His message too: it was so important for my parents and grandparents and uncles and aunts to be able to hear someone express those things that they were dealing with growing up, so it was something that was very powerful when it got played around the house. Those themes are even more powerful today when you look at what is happening.”

Pink Floyd – The Dark Side Of The Moon

“I just loved Pink Floyd growing up, I loved The Grateful Dead too, but exploring Pink Floyd was just such an experimental time for me as a young man. The early days of me being in a band and thinking I was going to be this guy travelling the world and spreading my music, I used to put on The Dark Side Of The Moon and the light flash that I got with it and it would just transport me into this other fantasy world. You can say that about any Pink Floyd album really, but definitely that one – it took me to another place and I still get that feeling when I listen to this album today.”

James Brown – Live At The Apollo

“I never got to see James Brown, but I was so close to him. My cousin Charles was in James Brown’s band, he played keyboards, trumpets and saxophone with in the band, so that’s the closest I got to him. I always wanted to be like my cousin Charles. I remember when one of my oldest uncles had died and my grandmother said to me that my Cousin Charles was going to be at the funeral, and all I could think about, even though I was sad about my Uncle, god rest his soul, was that I was going to meet my cousin that was in James Brown’s band. Let me tell you, he showed up in this black Lincoln limousine with his crew, all dressed up in black, and you could tell that these guys were on another level. I went up to them and said one day I was gonna follow in their footsteps and play music and I wanted to be like him, and they were just so cool, sunglasses on all the way through the funeral, and that’s the vibe for James Brown. I actually saw my cousin in the Living In America video, it was the coolest thing, the man was like the black Johnny Cash.”

“I loved the album before, Stankonia, but Speakerboxxx was the album that I always remember playing around the house. We grew up in Atlanta, where Outkast were from, and they were a big influence on all of us. I remember going to Bosstown Studios, which [R&B superstar] Bobby Brown owned, and the guys in Outkast had taken over. Big Boi was there and I got to meet Andre 3000, and I remember us talking and him being so excited that we had PRS guitars and Marshall amps. For me it felt like this was the first time he was getting into playing the guitar, he was like ‘Oh man! That’s like a Jimi Hendrix guitar!’ A few years later we see him playing the guitar and incorporating that stuff. They were such an influence on me, seeing these brothers from where I grew up doing so well and really not caring about the norm. Plus, they had incredible talent and flow, I still love that band.”

“My grandfather, we called him Big Daddy, was Frank Witherspoon, who was the first black man to de-segregate Tennessee walking horse shows in the 1950’s and 60’s – he is in the Hall Of Fame, all that stuff. But he was also a singer. Growing up we all listened to Aretha Franklin, that was something my mom used to love playing, and Big Daddy would tell us this story every time she came on the stereo about when he used to date Aretha Franklin, and her Father, the Reverend, never used to like my Grandfather and thought he shouldn’t have been dating her. I thought that was so cool that Big Daddy used to date Aretha Franklin and it just made her music that little bit cooler to us kids. But she had that voice, even up to her later years, that you couldn’t mess with.”

“I go in hard on Sam Cooke. Years and years ago a friend of mine was working with his estate and his record label, and he was able to get a lot of very personal stuff, which he passed on to me and which I hold very dear. I actually got the papers for the record deal he got for the song A Change Is Gonna Come. When he was given his star on the Hollywood Walk Of Fame you give you a little plaque of the star and I have that too, I keep it in my bar downstairs.

“Growing up listening to him as a kid, all that stuff was epic to me and my family, and the message was clear; a change is gonna come. You listen to Sam Cooke and you understood who he was and what he stood for and where he was coming from, this man was going through something that I feel we have unfortunately regressed to now. But how incredible for him to have to tour the world under those circumstances and to still come out on top as such a loved singer, writer, artist. Sam Cooke is someone that I feel I learn from every time I listen to him, his melody, his conviction.”