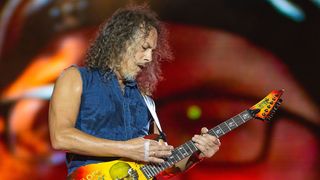 I first heard Metallica when I was 12 or 13 years old. At that age, I was into radio rock and pop punk. That’s all you got on MTV, or similar outlets. Then one day, a friend gave me a copy of The Black Album – he thought I might like it – and everything changed for me.

It was the first time I’d heard proper guitar solos, and because of that Kirk Hammett has been such a huge inspiration for me. I was already playing guitar by the time I heard Kirk for the first time, but very badly – mostly pop punk kinda stuff. But I copied The Black Album onto cassette, and started to listen carefully to the guitar parts. That still remains my favourite Metallica record, because it was on there that you got to hear the whole range of what Kirk was doing. There was the bluesy stuff, the shredding and the simple, melodic pieces.

One of the great things about Kirk is that while he’s capable of playing as fast as anyone, that really isn’t what makes him stand out; he actually plays memorable solos, which is rare.

I would put Kirk right up there in the top two or three metal guitarists of all time, just because he’s had a huge impact on the way I do things.

Trivium will reissue their debut album, Ember To Inferno on December 2.