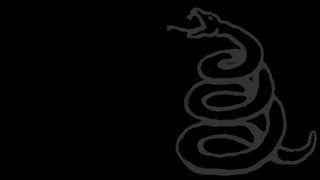 On August 12 1991, Metallica shape-shifted into a new dimension by releasing their fifth studio album, Metallica. And it’s testament to the sheer courage of the San Francisco thrash metal band’s convictions that they chose to release this game-changing set of songs in what to all intents and purposes was a totally black cover.

“There was no theme to this one,” said vocalist and guitarist James Hetfield when talking about what would come to be universally known as ‘The Black Album’. “It was a simple black cover and you had to listen to the music. You wouldn’t be distracted by a drawing on the front.”

None more black, then. But Spinal Tap this was not. As the ‘80s morphed into a new decade the San Francisco thrash band was already a big fish in a pretty large pond, a heavy metal act moving huge numbers of records when sales of that musical genre were still very healthy. But Metallica’s ambition far outstripped the world they inhabited. Their lust not to make money – they were already doing that – but to somehow go beyond led them to produce Metallica, an album that was simply extraordinary. Why? Because its songs and endlessly sympathetic production – by Canadian Bob Rock – touched the souls of millions of listeners who had never previously cared about either Metallica or metal. And yet the honesty of the music the band were producing still meant their rabid fanbase stayed 100% focused and loyal.

How on earth did Metallica pull off such a trick of the light? Hetfield believes he has some insight into how the album shifted over 16 million copies in the United States alone.

“I decided to go inward and a little more universal, asking questions about life and things that touch everyone,” he said. “When it’s a little more about your feelings and a little less about the outside world you can’t go wrong.”

Yet while the band’s unshakeable belief in the power of songs such as Enter Sandman, The Unforgiven, Sad But True and Wherever I May Roam drove them to avoid fancy packaging, the album’s black cover did feature one hidden, almost subliminal message. While the top left of the sleeve features a barely distinguishable embossed band logo, in the bottom right hand corner – and much more interestingly – lies an equally covert embossed image of a coiled rattlesnake.

The image is appropriated from a historical American flag, The Gadsden flag, which was designed in 1775 by general and statesman Christopher Gadsden during the American War of Independence, fought between 1775 and 1783. Featuring the coiled snake on a yellow background with the words ‘Don’t tread on me’ written underneath, the flag was displayed by the Commander in Chief of the nascent American navy, Esek Hopkins, on the ship he sailed on his very first mission.

The coiled snake on the Metallica cover makes a subtly veiled reference to Don’t Tread On Me, one of the release’s 12 songs. In it, Hetfield sings words that reference political phrases used during the American War of Independence. But above all, both words and image allude to Metallica’s fiercely independent mindset and their unquenchable desire to plough their own unique furrow. It’s a spirit the band retain to this day, fully 25 years after a completely black cover ended up in the homes of millions of US citizens.