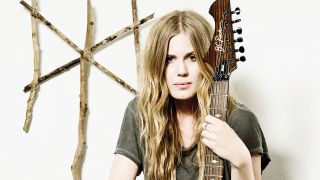 “I’ve had what I would classify as bad sleep since I was three years old,” states Amalie Bruun, the Danish singer-songwriter who plies her trade as Myrkur. “But the nightmares really intensified over the last couple of years. They got so bad that I started seeing a Jungian therapist. I was tired of waking up screaming, so I decided to make a conceptual record about it, with the humble hope that I could maybe sleep again.”

Bruun was able to reach deep into her subconscious and document her night terrors on Mareridt, which is every bit as intense and powerful as you might expect. Riding the extremes of her emotions, Bruun summons up a breathless dream life of rich Nordic folk, sweeping prog metal and expansive choral arrangements. The title track, Danish for ‘nightmare’, is a perfect illustration of Bruun’s vivid interior world.

“That song triggered the whole thing,” she explains. “I dreamt about a wicked deer that was hovering over me and falling towards me to spear its horns into my chest. It really upset me, but my boyfriend at the time said, ‘Wow, that’s really cinematic. Why don’t you try writing about it?’”

Helping realise Bruun’s dark visions was producer Randall Dunn (Earth, Sunn O))), Wolves In The Throne Room), who recorded the album between Copenhagen and Seattle. Its otherworldly feel is further heightened by the use of instruments both modern and ancient, mixing scudding guitars and strings with nyckelharpa (a traditional Swedish key harp) and Kulning (an old Scandinavian herding call).

The multi-faceted Bruun, who once appeared in a Martin Scorsese-directed ad for Chanel, had previously recorded under her own name, and, alongside Brian Harding, as indie rock duo, Ex Cops. The idea for alter ego Myrkur took hold in 2014, indulging her passion for black metal with a self-titled EP. Co-produced with Ulver’s Kristoffer Rygg, debut album M followed a year later.

“The name ‘myrkur’ means darkness,” she says. “So for me it meant going into my shadow side and my anima, the masculine energy combined with the feminine. It was my goal to come out as a more whole human being and to have connected with almost a divine energy, whether it be the archetypal goddess or Mother Nature or something with magical powers. Another ambition was to give new life to Nordic folk music, especially in my country, where we were so fucking Christian.”

Bruun has started to come to terms with her nightmares, discovering that the symbolic nature of her disturbing visions – be they scorpions, tigers or demonic deer – relate to themes of truth, resilence and adaptability. Much like her transformation into Myrkur, which resulted in online death threats from some pitiful members of the black metal fraternity, Bruun is embracing her intuitive sense of survival.

“The more distance I get from it,” she says, “the more I realise that any big growth and important transition in life is going to fucking kick you in the teeth. It’s not supposed to be pleasant, so I just keep walking into the fire or into the lion’s cave.”

Sounds like: Ulver, Björk and Enslaved fighting it out on a mythological Nordic plain

Current release: Mareridt is out now on Relapse