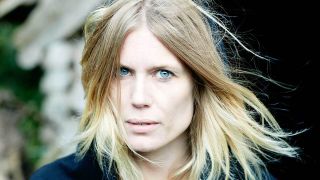 In 2017 Myrkur took the leap from black metal curio to one of the most adventurous and awe-inspiring artists in heavy music. Her latest album Mareridt married extremity with haunting choirs and traditional Scandinavian folk music, in a truly invigorating display of artistic vision and integrity. Like nothing we’ve ever heard before, it reached number two in our Albums Of 2017 list – in fact, we’re still listening to it right now.

We called the mastermind behind the album Amalie Bruun (aka Myrkur) to talk about the record, the future and spirituality.

How do you feel about the response to Mareridt so far?

“It’s been very positive. In terms of growth since my debut album, it’s been really wild, actually. So that’s a very positive development, I guess. I think they’re right. I do think it’s a really good album!”

It’s a very thoughtful and thought-provoking album, it seems very therapeutic and cathartic for you as an artist… are you hoping that it’s helping people directly in that same way?

“Mostly people are writing that they’re really engaging with it and getting into it and spending long nights with it. No one’s saying that it’s an easy listen and I agree, it’s not. I don’t know if people will feel the therapeutic effect of it; only time will tell.”

Does it matter if they don’t?

“Especially with this album, I set free some demonic thoughts and nightmares and some music, and now it’s got a life of its own, so after that it’s not really up to me to judge what it should or shouldn’t do. That’s how I feel, but particularly with this record I’m oddly passive about it, without being apathetic. It really did feel like an exorcism, so once that was out, I feel kind of distant from it. Unlike my first record, which I was much more invested in afterwards, this one is more like, ‘Here everyone, take these songs! Now they’re away from me…’ It’s interesting. Time will tell.”

Was this album the first time you’d sung in English?

“Not in my life… haha, but yes, it was the first time I wrote and sang in English, but I think that was mainly because sometimes, when I woke up from nightmares, some of them, in my ramblings that I write down when I’m half asleep, some of them were actually in English. So then I thought, okay, let’s go with that on these particular songs, you know? Why change that? It was kinda fun. I read some of it now… I have some notes in this book I have, and also on my phone, and I’ll be reading and I’m like, ‘What the fuck is this?’ What is this mix of three languages, half asleep and stuff… haha!”

Away from the awful reality of dealing with the music industry on any level, there’s obviously a big spiritual element to what you do. How would you say your spirituality has evolved or grown over the last 12 months?

“I guess I’ve become further interested in pursuing a life away from materialism and kind of… the modern world? Obviously I’m busy with music, but the more I manifest myself, I suppose, in the way I work, then the more I can call the shots about how I want to design my life, you know? So it’s only going more in that direction, and that also means a more natural life and not engaging in kind of things on the internet or even watching the news. I think most people feel that way right now. As a musician, you want to keep it about the music, and that’s about the only thing you can do. The more time I can spend in nature, the better for me.”

What’s next for you?

“I’ll be doing an acoustic folk tour in early 2018. Then I think also there’ll be an American tour starting in February. Then I’d like to write that dark acoustic folk album that I’ve talked about for three years.”

Would that be a Myrkur record?

“Yeah, definitely, and I’ll work with some of the same musicians I’ve worked with before. I’ve purposely not given anyone around me any promises of dates, but I feel very inspired to do that, and I feel that a lot of people are asking me to do that. That’s inspiring when it’s already something I’d like to share, so that’s definitely in my plan. I don’t know about other people’s plans, haha!”

You can read exclusive interviews with all the bands that made 2017 – from Arch Enemy to Satyricon to Avenged Sevenfold – in the latest issue of Metal Hammer. Buy it directly here or become a TeamRock+ member to read it right now.

The metal bands who slayed in 2017