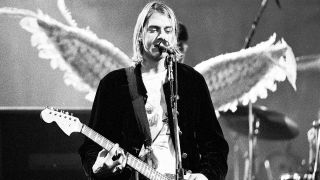 The below songs are allegedly previously unreleased instrumental demos from Nirvana’s 1993 In Utero sessions at Pachyderm Studios. They were found by a Nirvana superfan who bought the studio reel from eBay and posted their findings on a private Nirvana forum.

According to Alternative Nation, the first track below features Dave Grohl playing all instruments and is a frantic, fuzzed-up punk track rattling through at breakneck speed. With Grohl being the super-talented multi-instrumentalist he is, this track could have ended up with him on vocals too! But that wouldn’t feel like Nirvana would it… it’s more a proto-Foo Fighters track (which isn’t necessarily a bad thing).

The second track Lullaby is a much less rigid affair and basically sounds like three guys dicking around in the studio. Reports speculate that Kurt Cobain is on drums, but there’s no news on who’s on keyboard duty. It sounds like the most inaccessible prog band the ‘90s ever produced, although there is a furious drum solo at the end (obviously).

The other tracks on the leaked reel include two versions of Dumb and three versions of Marigold, which you can listen to here.