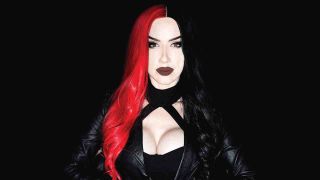 Ash Costello has seen the best and the worst the music industry has to offer. Her band, Californian goth-metallers New Years Day, rose to prominence in the 00s on the back of MySpace buzz, only to find their career derailed when their record label went under following the release of the band’s debut album, My Dear. Where lesser bands would have crumbled, Costello refused to give up and eventually got things back on track with the follow-up, 2013’s Victim To Villain. Since then, she and NYD haven’t looked back, releasing their aptly-titled fourth album Unbreakable in 2019. This is what she’s learned from a life at the sharp end of the music industry.

“In 2008-2009, New Years Day got shelved by a now- bankrupt record label and we didn’t even own our name so we couldn’t do anything for two years. That was really depressing but would I go back and warn myself not to sign to that record label? No way: everything happened exactly as it should. I’m a big hippy at heart; I’d rather let the universe point me in the direction, that’s how I’ve always lived my life and it’s worked out for me. I feel like I walk amongst my peers my age and at the same level as New Years Day and I feel like I know so much more than them. I’ve been in a band since I was 14, I’ve seen and been through it all, so a lot of people come to me for help, but at the same time I know I still have so much to learn.”

Social media opened up my world

“It’s so strange to think how much the music industry has changed since the MySpace days, but I was around even before social media came in. I was printing flyers and standing outside venues advertising to people from that area, there wasn’t a way to advertise to people across the world like there is now. The only thing more helpful than social media to artists is the home studio experience; since Pro Tools became accessible to everybody, anybody can make a demo or album in their bedroom.”

Keep your eyes on the prize

“I read somewhere that if you want to make it, you have to be obsessed with your craft, which I really am. I live this scene – it’s all I think about. Every day, I think about what’s going on in the scene around me and in other scenes outside of mine. I’m watching everything 24 hours a day. I make it a point to learn as much as possible every day.”

Sisters are doing it for themselves

“I can see how hard it is for bands to put butts on seats and sell tickets to shows, not a lot of bands can do that. So for only a three-band bill of three women selling out arenas one after another like it’s nothing, I know enough to know that’s a big deal. Our tour with Halestorm and In This Moment isn’t even finished yet – we have the UK and Europe left to go – but I never want it to end. To the credit of Lzzy Hale and Halestorm, though, they don’t need In This Moment and New Years Day to do that. They could do it just fine on their own.”

“Our label president came to our hotel room and saw all of our makeup and he goes, ‘Is this for both you guys?’ And Nikki [Misery, guitar] went, ‘Yeah, we share both our makeup.’ And they all ended up talking about how women’s makeup is better anyway. I’ve taught Nikki how to do his makeup – when we met, it was ghastly. He was using his fingers to put on eyeliner, I had to show him that there was an actual pencil and/or a brush to do that! He’s got really good now though, I don’t have to look over his shoulder anymore.”

Always be yourself… or be Marilyn Manson

“There’s a combination of front-people who, if they didn’t exist, without a doubt I would not be who I am, and Marilyn Manson is absolutely one of them. Both artistically, in his personality and his overall worldview, too, obviously his music is part of it but it’s more his intellect that inspired me. He’s intelligent and very well-spoken, very to-the-point and there’s no bullshit there. I’ve tried to not give a fuck like he does, but sometimes I fall off the wagon and I lash out at someone online who says something stupid. I have to remind myself, ‘This isn’t what Marilyn Manson would do, reel it in!’”

Gwen Stefani is an underrated idol

“Gwen Stefani has been a huge influence in my life since I was 10 years old, she’s the perfect mix of masculine and feminine. When she gets onstage, she’s incredibly powerful like one of the guys, but she’s not overly masculine, she’s still very cute and feminine. I don’t think she gets enough credit for mixing the two so flawlessly, especially when we all look back on her work. People accept her and move on but they don’t stop to think that what she does must have been very difficult.”

The best fashion statements are accidents

“I didn’t expect the popular response to my hair. A lot of people think it was calculated but that’s giving me way too much marketing and branding credit. It happened a long time ago, way before I started taking social marketing classes. I’ve dyed my hair since I was 10 and I’ve tried every colour combination and style you can think of. I just happened to do this one day around the time my band started taking off and people really liked it, so I kept it. I wish I could say there was a drawn-out thought process but there really wasn’t. What’s crazy is there are wigs out there that have definitely ripped off a photo of me on their packaging and people come to our shows wearing those wigs!”

Being a role model is tough

“I feel a lot of pressure to be a good role model but I’m very vocal that I’m an accidental role model. I didn’t ask to be one but I’ll do my best with the position and the importance of it. I try to use my voice for good as much as I can. My favourite thing we did on Warped Tour was when I had a class every day that 50-100 kids could sign up for, and I would talk to them about their issues and how much I understand the pressure they’re going through. Being a kid today with social media, I can’t imagine the pressure they’re under every day. We never had that as kids and it’s fucking them up. At this time depression, self-harm and suicide is at a high rate, and I think that definitely correlates to the influence of social media.”

“I’ve been on Warped Tour seven times over 10 years, the most any female musician has been on Warped. It’s a huge part of my life and that’s a whole decade to me, it’s one of the things that inspired me to pursue music and give my band a chance. Without it, I think it’s going to be very hard for smaller bands to get traction and exposure but, as a music listener and lover, I know things move on. Look at all the tours over the years that were so important and TV shows that were so important to exposing bands on a mass level; they have all come and gone but music has been just fine.”

Pick yourself up and dust yourself off

“My clothing brand Bat Royalty was one of the shittiest lessons in my life. Explaining it in terms of music: my bat boots, that have been copied by three dozen companies now, were the equivalent of writing a No.1 song. Imagine you’ve been in a band for a long time, you’ve written a song that’s gone to No.1, and the label rips it all out from underneath you as soon as you’ve finally made it. They take away the money you made for it and your rights to it, they take its chance of success afterwards. It was a very successful company but because of a lawsuit over my product, you can lose that success as quickly as you gained it.”

“Like most things, I give no fucks. I’m doing everything I can to not lose that momentum and find another company to manufacture my clothing line with. I feel so burned by that experience. I have business partner baggage now, I’m too afraid to partner with anybody. My band started gaining so much attention in the last two years and we’ve become so busy, so now it’s really hard because I can’t find someone to man it for me while I’m travelling. I’m gonna figure it out when it’s meant to happen and it’ll be even better than it was before. Recently, I’ve learned a lot of lessons about business because I was more artistically minded than business-minded and my outlook on business was to trust people and assume they’ve got me, which definitely isn’t right. I’ve learned to be less trusting and stand up for myself.”

Don’t look back in anger

“I’m gifted in a way because I know quite a few people who deal with shitty people and shitty experiences and it shows through their negativity, but I’m not like that. I think, ‘Yeah that sucks, but look at how gorgeous it is outside, look how gorgeous I look today!’ I can’t be mad, I’ll give myself time to be upset and then move the fuck on because it’s not that bad. You can’t tell that to someone who doesn’t have that mentality, though, they’ll never get it. Maybe I’m still so bouncy and bubbly because I have an outlet for aggression with my music and I really get to let that out. Lyrically, it’s obvious that I get upset pretty easily but it’s very therapeutic to write songs about it.”