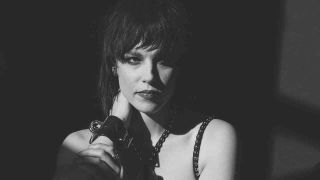 After putting Halestorm together as a 10-year-old with her drummer brother Arejay, Lzzy Hale has become one of modern rock’s most charismatic figures. The US band’s last two albums, 2015’s Into The Wild Life and 2018’s Vicious, crashed into the Top 10 on both sides of the Atlantic, while a triumphant appearance at the 2019 Download Festival saw them headlining the second stage. But now she faces an entirely different task – answering your questions on everything from weird signing sessions to her love of Black Sabbath and The Darkness…

Were you more than satisfied with your Download 2019 set? Your voice sounded incredible!

“Thank you, I thought we did really good. It’s funny walking out onto that stage after playing Download for almost a decade, being able to headline the second stage. I remember saying to my little brother, Arejay, just before we walked out, ‘This whole thing of starting a band wasn’t a stupid idea, look at all these people here!’ That show was such a great high when you lose your mind a little bit because you get lost in the show, I think that’s what we’re always chasing when we’re doing live shows. The beauty of Download is nobody cares about the weather but if it hadn’t rained and the weather wasn’t crappy, it wouldn’t be the same festival!”

How the fuck do you walk about in those heels onstage? Seriously, can you give a girl some tips? I end up feeling like Big Bird on rollerskates.

“Very carefully! I’ve been playing in high heels since I was 16 just because it was one more thing the boys couldn’t do – I can sing, I can play guitar and I can do it wearing high heels! It’s funny that I haven’t truly fallen over in them yet, it looks more dangerous than it is because heels are like stilts, they’re an extension of yourself. The only time I truly fell onstage was when I was wearing Converse Chuck Taylors. I don’t know how to explain that but that’s just my lot in life. I end up buying shoes with a little bit of a platform at the front, it’s very uncomfortable if your toes are on the ground and your heels are way up high. I don’t know if you’re comfortable with buying them but my advice is stripper heels are the absolute best because they’re made to be danced around in!”

What song was the most fun to record on Vicious?

“I have to say Uncomfortable – it was the first song we truly got excited about on the record. Also, we added a lot of weird things to it, like an instrument called an astral whip that literally looks like a vacuum cleaner hose. The harder you whip it, it makes a higher sound. That’s part of the beauty of being in the studio: anything goes. We ended up having a lot of fun with that one and there was a lot of laughing to the point of tears!”

How do you define beauty, or what is beautiful to you?

“Now I’m 35 and I’ve been narrowing it down since I was a teenager, I consider beauty to be when someone is unafraid to be unapologetically, truly themselves. I once met this beautiful woman who was always teased for being six foot tall and having a big nose. Instead of hiding it or making herself more acceptable to those people, she would always wear platforms and buy really big glasses to accentuate her nose. To me, that’s the most beautiful thing.”

Who is there left in the rock and metal world that you’d love to meet or work with and why?

“In a classic rock sense, I’d love to do something with Heart. In the modern rock and metal sense, The Darkness are my pick just because I think they’re ridiculous. We’ve never toured with them but we know each other, we talk online all the time so I think that’s a good open door. Also, every time I think about working with The Darkness, I smile and laugh because it’d be hilarious. The last time I saw them in concert, Justin Hawkins did a headstand on the drum riser and made everyone clap with his legs going back and forth – it was the most amazing stage move I’ve ever seen in my life and from that moment on, I’ve thought to myself that we really need to tour with them. I will find a holographic catsuit if that’s what I have to do!”

If you had a time machine, where in the past or future would you go, and why?

“Any time in the 1970s. Regardless of what was going on politically, I think the music was amazing and I would just be going to shows non-stop. I’d say late 70s to early 80s, maybe 1979 just in time to catch a lot of people in their heyday. It’s 2019, guys, let’s get these time machines up and running by now!”

“Hello Dan! It’s hard to pick one because I’m the sum of all the things I listen to but if I had to pick one, it has to be Black Sabbath. No matter what era, it’s always epic. Tony Iommi as a guitar player is the total master, he could be drinking tea while writing an amazing riff. How can I even compete, this guy doesn’t even have all of his fingertips!”

Any chance of doing any album-in-full shows?

“I’d love to do that. We’ve talked about going out on more Evening With shows just so we can play the entirety of records and throw in everything we want because we have the entire night to ourselves. You can definitely look forward to that in the future, we’ve been talking about it seriously for a few months now.”

What’s the most cringey thing a man has ever asked you at a show?

“I’m immune to a lot of it now but  a couple of months ago, a guy wanted me to sign his bare ass. I initially said, ‘Really? It’s gonna ruin my Sharpie!’ But he looked at it like it was a sort of rite of passage that would complete his life, so I ended up doing it and he didn’t drop his pants totally down, he just showed me a cheek. It did in fact ruin my Sharpie though, because it was a little sweaty there. Another time, a fan gave me a letter and an envelope with a tampon inside. They asked if I could use that tampon next time that time comes for me, then tweet them so they could feel closer to me. That was a little cringey but somebody went to the effort to think about it. There’s no amount of education that could’ve prepared me for that!”

Who would you have at your dream dinner party and why? You can pick five guests.

“Since we’re talking about Justin Hawkins, we can include him, plus definitely the late, great Ronnie James Dio. We’ll throw Janis Joplin in, then M Shadows because he’s a sweetheart and he knows all the best sushi places so we’d be looking towards him. I’ll also have my little brother Arejay because he’s a good party starter. He’s my brother and my drummer but I’m still including him in things!”