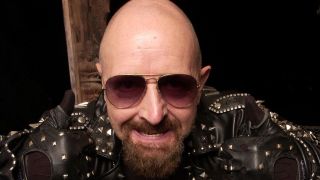 Rob Halford: \u2018I used music to work out all that anger I was feeling\u2019 (Image credit: Annamaria DiSanto\/WireImage)

Not for nothing do they call Rob Halford the Metal God. The Judas Priest frontman helped define metal’s sound and look in the 70s and 80s, from the operatic screaming to the leather uniform to the tongue-in-cheek humour. In the late 90s, he became the first openly gay metal singer when he confirmed his homosexuality in a landmark interview (“I’ve become the stately homo of heavy metal,” he subsequently quipped). An 11-year hiatus from Priest ended in 2003 – since then, the band have released a trio of albums that helped cement their reputation as one of the biggest influences on modern metal, even if they’ve never been fully embraced by the guardians of mainstream music culture. But we start by going right back to the beginning…

I was born on 25th August 1951. I was born in my aunt’s house in Sutton Coldfield – that’s the place where I popped out without any warning! And then of course my mum and dad moved to Walsall where I still have a house.

I think it’s probably when I was about four or five, being out and about on the streets of the council estate where I was raised. I think that’s the most significant memory for me, but I can also remember me and my sister having our photo taken before that. My mum’s still got this picture, and we were both holding these little puppet marionette things. Obviously there were photos taken before then, but that’s my first official photo shoot that I remember anyway!

How did you get along with your siblings?

Really, really well. My sister is a year younger than me and we’ve never acted like brother and sister – we’re just best mates. We were always looking out for each other and supporting each other. When our younger brother came along we were both in our early teens and we had this outsider arrive – not that I want to call our Nigel that! But when you’re in your teens, you’re off exploring the world, and then another family member comes along and you become very home orientated again and you feel very protective of your family. On the whole, we’ve always been like a typical family though. There’s always been a bit of friction between us – which there should be. I think that’s when characters develop and that’s how you help each other through life’s hurdles.

What was it like being the oldest of three kids growing up in such a deprived area?

Everybody knows that there are some parts of the West Midlands that are incredibly poor, but they’re honest, hard working people. When I was born in the early 50s, the Second World War had only been over for a few years and there was still rationing going on. But people were very proud and very determined to come back and come back strong. Life was really tough. My dad worked in the steel industry and my mom worked from home and also in the factories and stuff, but it was a good childhood.

Like most council estate communities everybody looked out for everybody else. Everybody also knew everyone else’s business in a way too. I’ve got a lot of good memories from that time. It was a good place to start life and it taught me the value of hard work and I think that ethic is still ingrained in Judas Priest today. We’re still hard working musicians. We never take anything for granted and we’ve all still got that connection to why we wanted to be in a band in the first place.

Carrying on from that – at that particular time, how difficult was it for you to come out?

I think that kind of experience, in terms of the pressure involved, is something that every gay guy goes through – feeling isolated and feeling that you’re the only person in the world who has those kind of feelings. In those days, you didn’t talk about those kind of things. It wasn’t talked about in the media, in soaps or on TV. And, I mean, for me it wasn’t until my late 20s that I felt I was actually part of something bigger y’know?

I supposed I used my music to work out all that pent-up aggression and depression I was feeling, as we all use music to blow off steam. I know it’s still tough today, even with the broad base of popular culture in the UK, there’s still a very bigoted attitude towards homosexuality. I know it’s a little bit easier now, but it’s still tough, especially in the world of heavy metal. Although, that said, I like to think I’ve exploded that particular myth.

How do you feel about being tagged as a gay icon?

I think when you get recognised for that, it’s something you don’t expect. The bottom line is that I’m a heavy metal singer in a band. Just because my sexuality isn’t considered to be the norm, for some reason it seems to always carries a bit of extra media interest. I think it’s kind of amusing that I have absolutely no relationship with the gay media whatsoever – not that I’m looking for it either. I’ve never been approached by any of those kind of publications because I think heavy metal is still viewed by the wider media as still being this very macho, male environment and the gay media still treats it with some detachment.

Don’t you find it ironic that Judas Priest’s imagery and clothing mirrors certain aspects of gay culture even when heavy metal still considers itself as a vehemently heterosexual movement?

It was never a consideration to be honest with you! When we bought that imagery into our music it was purely for emphasising the connection between how we sound and how we look – we sound this way so we have to look this way. I’ve always found it ironic that a certain aspect of gay culture has also chosen to dress this way. I’m not into that kind of thing though. I guess it’s whatever floats your boat y’know? I’m what you’d call a very vanilla kind of gay guy.

In the 80s when it was all pretty boys with lipstick fronting bands and going hell bent for leather to get chicks, how did you fare in the groupie stakes?

I never got any! [laughs] And that’s the sad thing. I’ve been celibate practically all of my musical career. I know it’s supposed to be sex, drugs, rock’n’roll… Well, I used to do the drugs and I still do the rock’n’roll but the closest I came to sex was going back to my hotel room for a wank! [laughs] I don’t want to shatter anyone’s idea about the lifestyle, but basically you play a show, get cleaned up, have some food and go back to your hotel room… alone!

Getting back on track, what was your relationship like with your parents growing up?

For the most part it was very, very good. I don’t recall any real moments of trouble per se. Both of my folks were very kind of open about making sure their kids were happy.

I think they sensed it was coming – the band I mean. I really didn’t become totally serious about being a professional musician until I was in my late teens. And by the time I was 20-21, I was already a part of that world. But my mum’s philosophy for everything was, ‘Are you happy? Well, if you’re happy I’m happy.’ Which is a very simple kind of mantra isn’t it? My parents always encouraged me and supported me with whatever I did. I sang in the school choir and I was always singing in school productions and I think they sensed I felt a great deal of joy in singing.

As for coming out, it’s either a case of confront the issue head-on at an earlier stage or, as it was with my lot, it’s something you don’t really discuss. Y’know, ‘If he is… so what? As long as he’s happy.’ But again that comes back to their open-mindedness and their hope that everyone in the family would find contentment wherever they were or whatever they were doing. I think it would be terrible to be like that little lad in that movie, Billy Elliot, where his dad can’t accept that he wants to dance and decides to either kick him out, to never speak to him again or to tell him he’s going to hell.

Did religion play a part in your upbringing?

We never really talked about religion and spirituality when I was growing up, as much as any family doesn’t. You go to church to baptise a child. The next time you go it’s a wedding and the next time after that it’s a funeral y’know? So religion wasn’t really a part of life for me then. Like most things you discover on your journey through life, once you’re an adult and you’re trying to make sense of the world. ‘Why are we here?’ and stuff like that – you tend to become a bit more philosophical about things.

Do you have faith?

Oh yes, I have a tremendous amount of faith. For me, I found faith in 1986 when I quit drinking and doing drugs. And once I’d found faith and started the healing process I felt a lot more peaceful inside. I began to appreciate what’s important in life and what’s not important. I used to drink so much that I’d black out and wake up the next morning and not know how I got home. I realised I didn’t need these things to help me write music and I certainly didn’t need these things to help me live my life – I think I had a guardian angel looking over me.

This originally appeared in Metal Hammer 140