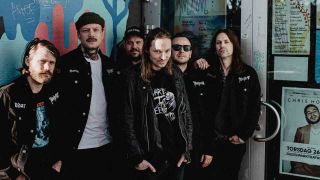 Six nondescript, tattooed lads from Norway’s fourth largest city start a band that a) play a mutant hybrid of black metal and rock’n’roll, b) sing entirely in Norwegian and c) have a weird obsession with owls. Just what part of that equation screams ‘SUCCESS STORY!’ to you?

“We were just kids!” grins Kvelertak guitarist Maciek Ofstad as we chat in a cafe in Oslo, 10 years after the Stavanger quintet unleashed a debut that would turn the metal scene inside out. “I was 22 years old, and I had no idea what to expect from this band. We released that album not knowing that it was gonna change the world of metal forever, you know?”

There’s a mischievous glint in Maciek’s eye as he says this – you suspect his tongue may be planted just a little inside his cheek – but he has a point. While other bands had amplified black metal’s rockier side over the years (“Satyricon tried to do it their way back in the day,” Maciek points out), few managed to do so with such a raucous, infectious sense of fun. Kvelertak wasn’t just a great album: it sparked interest in a different kind of heavy music that was emerging from Norway. Suddenly, everyone wanted a bit of catchy rock’n’roll with their icy tremolos.

“Suddenly, that [kind of music] was normal…” agrees Maciek, before busting out another grin, “…but we actually perfected it.” What followed was a whirlwind experience for the youngsters. Kvelertak went gold in their home country, shifting more than 15,000 copies. They even bagged a Spellemann, AKA a Norwegian Grammy. And, in the space of just a few years, they went from playing toilet venues in their homeland to supporting the likes of Gojira and Mastodon around the world, receiving patronage from James Hetfield, and playing to 22,000 people at Oslo’s Telenor Arena as special guests to Foo Fighters.

Two more albums followed – 2013’s solid Meir and 2016’s surprising Nattesferd, which upped Kvelertak’s softer sensibilities with sprinklings of plodding, Status Quo-esque dad rock (“that was the Blue Öyster Cult era,” jokes Maciek today). Still, things were moving in the right direction, with two stints supporting Metallica across Europe in 2017 and 2018 set to be a crowning achievement for a band that had long defied all reasonable expectations. Except, a spanner was about to be thrown into the works.

“We knew that Erlend [Hjelvik] was gonna leave during that tour,” Maciek says of their now ex-frontman, who would depart Kvelertak soon after the Metallica dates wrapped up. “At least, he had expressed his feelings. He wanted his life to go a different way than how it did with the band. And that’s natural. Being in a touring band – excessive touring – for 10 years isn’t for everyone. He wanted to go another way. But we didn’t want to quit. We were like, ‘Holy shit, we’re playing these rooms, we’re friends with Metallica now…’”

Erlend was a much-loved presence on stage, and for a band who had prided themselves on creating a killer live show, Kvelertak knew that whoever replaced their singer had to fit quickly and seamlessly into their mould. Luckily, they happened to have just the chap in mind. Enter: Ivar Nikolaisen.

“I was just living in a gypsy camp up in the forests up North,” chuckles the skinny, long-haired gutterpunk currently sitting with us. “They just called me and asked me if I wanted to join the band. It was three days before a show!”

“Erlend quit on a Monday, and on the Friday we had a show,” explains Maciek. “We were already on the Metallica tour when Erlend first expressed his feelings about quitting. The rest of us had a band meeting, and there was just one name who could do it. It was either Ivar or nobody.”

So what if Ivar had said no?

“We would be fucked!” chortles the guitarist. “We would do an instrumental album…”

If Erlend’s departure came as a surprise, Ivar’s anointment as his successor makes all the sense in the world. Not only is he a seasoned face on the Norwegian metal scene, but he’s well-versed in the kind of frenetic, rock’n’roll energy that is demanded of Kvelertak both in the studio and on a stage, having fronted (among others) Hadeland speed-rockers The Good The Bad And The Zugly. Not only that, but he’s actually contributed to Kvelertak’s music already, making a guest appearance on debut album breakout track, Blodtørst. It all meant that a potentially big ol’ bump in the road was driven straight over. Ivar was announced as Kvelertak’s newest member at a show in Flekkefjord on July 20, 2018, and would spend the following year settling in by way of live shows across Europe. Then, it was finally time to think about new music.

Returning to Massachusetts’ Godcity Studios with producer Kurt Ballou – a key ingredient of their first two albums – Kvelertak set about creating their fourth LP. Despite having previously switched things up by bringing in Nick Terry to produce Nattesferd, the band felt that the new songs they had written together better fitted Kurt’s style – and, beyond that, they were keen to conjure some familiarity after the line-up change.

“We knew that the songs were gonna fit his sound, so we really wanted to go back with Kurt,” explains Maciek. “And there had been so much shit for the last couple of years, that to go into a studio with someone you don’t know and have one more uncertainty in a process… we changed singer, we changed drummer [Kjetil Gjermundrød jumped ship last year, replaced by Håvard Takle Ohr], we don’t really need to change the sound right now. Kurt knows what works with us really well, and he’s very strict. We needed an adult!”

The results speak for themselves. Splid (that’s ‘Discord’ in English) is a fantastic record – by far the best thing Kvelertak have put their name to since their debut. It packs the freewheeling intensity of that first album but peppers it with a ton of expansive left-turns and bursts of experimentation that mould their sound into scintillating new forms. At just under an hour, it’s their longest album yet, but it evolves and twists so often that it never drags. Oh, and there are also two songs sung in English – the galloping, Maiden harmonies-hued ‘title track’ Discord, and the deliriously catchy Crack Of Doom, featuring Mastodon’s Troy Sanders. What’s that all about then, fellas? Songs in English? Making a cynical stab at appealing to bigger markets, are we?

“Absolutely not!” insists Maciek. “Ivar’s played in a million bands where he’s always sung in English, so that’s always going to be natural for him.”

“We wanted to have the whole album in English,” adds Ivar, laughing, “but the thing is, I put all the words I knew in English into two songs, and I didn’t have any more!”

He looks at Maciek and feigns confusion before the two break down into guffaws. “I didn’t! I didn’t know any more!”

Despite their insistence that the English lyrics are a natural part of the process, both Maciek and Ivar know that some pockets of the Internet have greeted the move a little cynically.

“I heard some people complain that we were ‘sell-outs’ for doing two songs in English, and also that we have some melodic, singing parts,” groans Ivar. “Is it selling out to have songs that are almost 10 minutes long?!”

That certainly does feel sold out is the gig that Kvelertak play later that night. A special album launch event put on for select media and competition winners, it takes place in a 400-capacity venue under the very cafe we were sitting in earlier. Despite temperatures outside dipping below freezing, it is packed to the rafters and toasty in here. It’s a purposefully intimate show designed to show off the new material, and the seven tracks aired from Splid all sound colossal. Crack Of Doom draws a huge response and already sounds like a song that should stay in Kvelertak setlists forever, while the eight-minute Fanden Ta Dette Hull! might just be the band’s pièce de résistance – a rumbling, sprawling masterpiece complete with a thrash metal midsection that would give Overkill whiplash.

Ivar is a noticeably different stage presence from his predecessor – more rock’n’roll showman than head-down headbanger – but he looks well at home and his stage patter is warmly received (or at least we assume – our Norwegian is a little rusty, but everyone definitely looks like they’re having a lovely time).

It’s a rowdy, loud and breathless 16-song set with a clear message: Kvelertak still have plenty to offer the scene they so heavily affected a decade ago, and they are absolutely not going anywhere. That they’re still here 10 years on and still smashing stages to bits is surely proof enough of that.

“The first tour we ever did was with Converge and Kylesa,” recalls Maciek later. “We drank all of the beer in their fridge. We had no tour etiquette. Kylesa had to say to us, ‘Hey guys, you’re the shit band on the tour, you can’t drink all the beers. It’s for us.’ Ha ha ha! Now, we finally have our own fridge.”

So there we are. Ten years after blowing our minds for the first time, Kvelertak have a fridge, a Norwegian Grammy and four albums under their belts. Oh, and they weren’t kidding when they said they’re, like, total besties with Metallica.

“Yes, I have Lars’s number,” laughs Maciek when we prod him on that particular point. “I texted him on his birthday and got a ‘Thanks, man! Hope things are rocking. L.’ I checked that message a couple of times before I sent it!”

And what next? What else do six lads from Norway’s fourth biggest city have left to tick off the bucketlist?

“We need to fly over to America to get a Grammy, then we can call it a day,” argues Maciek, before pausing a moment, that mischievous look creeping back onto his face. “Actually, no. I think we’ll keep on doing this for 30 more years.”