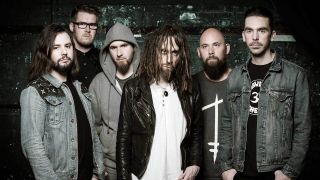 If you only know one thing about Sikth, it’s that they reinvented what it meant to be a British metal band, introducing odd rhythms, technical proficiency and eclectic melodies. Not content with the usual chugg chugg chorus formula, the proto-djent pioneers showed us all what was possible within the confines of metal, taking it into the great beyond with their first two albums The Trees Are Dead & Dried Out Wait For Something Wild and Death Of A Dead Day. Their influence is still being felt in the UK scene today, as more and more bands embrace the progressive side of metal.

Reading’s Arcaeon are massive fans of Sikth, so it only felt right to ask them to provide the ultimate playlist. So here we go! The ten best Sikth songs of all time… as chosen by Arcaeon vocalist William Alex Young, guitarist Sam Machin and bassist Eifion Sweet.

William: “As soon as this hits it’s already unorthodox. The weird vocal refrain that ushers in an insane groove and staccato call-and-response between Mikee and Justin; I’ve never heard done quite so well in any other metal band. And the guitar work was something that, even in 2010 or so when I first got into the band, I had never heard done in that way before.”

Where Do We Fall

Sam: “Sik​th take imagery in music to an almost cinematic level. Every section in this song is woven purely of magic​. The simple yet effective synth over the last verse being worthy of a mention, and the change in pace from the heavier, more technical tunes is enigmatic but at the same time perfectly balanced with the rest of the album.”

Scent Of The Obscene

Eifion: “That intro. That intro! It’s insane. From the offset of scene setting atmospherics into the relentless slap bassline, it doesn’t let up. Hearing a bass take such prominence to be the intro to the whole album was inspiring to me at the time. I always wanted to take bass away from being the instrument in the background and it here it was, pride of place. The song doesn’t let up in its energy, and the dual vocals play off each other beautifully. I’ve received many bruises in my time throwing myself into strangers during Sikth live sets to this song.”

Can’t We All Dream

William: “ The atmosphere created in this song is something I’ve never heard another metal band really pull off in quite the same way. It’s atmospheric, yet raw and gritty. Mikee’s vocal style shines in his scratchy singing and gruff screams; the repeated refrain at the end is twisted and haunting, which leads into the second part of Emerson perfectly.”

Sam: “A melancholic, dark and frostbitten ballad of loss and sadness, a beautiful elbow guitar intro, with a wonderful mood and pacing throughout. It was a standout for me because it’s such an interesting and harrowing listen in comparison to the rest of the Opacities EP, showcasing again how versatile and creative this band can be​.”

Eifion: “I thought I had bought a metal album until Emerson (Pt. 1) came on. It’s beautifully written and completely out of left-field, yet not out of place. I’m stunned a metal band has put a song like this on a ‘metal’ album – I respect the band ten times more just for including a piece like this on the album. To hear Pt. 2 later on and subsequently learning the meaning behind the pieces just added depth to this respect and taught me that music is more than just genres.”

Century Of The Narcissist?

William: “The new album was a pleasant surprise, Joe Rosser (vocalist) did the band justice while adding his own flair to the songs. This song, along with the insane riff in Riddles Of Humanity, stick out. This song also opens with an odd yet restrained riff, highlighting the band’s groovier moments, and the catchy chorus proves that the band have lost none of their peculiar melodic charm. The grove that closes the song is very cleverly written to be as massive as possible.”

How May I Help You?

Sam: “I can remember asking myself ‘How is this possible?’ when listening to this song for the first time. I used to have to go to my hero grandparents’ house to use their internet when I was young, and a good chunk of that time was spent watching the video over and over again. The story-telling in this song is incredible and is woven seamlessly into relentlessly bizarre guitar passages and structure changes​.”

Skies Of The Millennium Night

Eifion: “ This song is all about musicianship, and seeing it live is a thing to behold – most notably the outro where the musicians take centre stage. I love how the dual vocal styles are used to create their very own atmosphere, which is one of my favourite aspects of Sikth, however if I did not doff my cap to James Leach for his contribution to this song I would be remiss as a lover of the bass guitar.”

All: “We all agree that this tune managed to encompass everything that was great about Sikth in one brilliantly written package. Killer riffs, technical breakdowns and rapid fire vocals, coupled with a simple but memorable chorus and interesting lyrical content. The wild riff in the breakdown is definitely up there with the greats and was so fresh at that time when bands like Parkway Drive seemed to hold the crown for ‘cool’ breakdowns. Dissonant harmonies and tapping sections coupled with perfectly memorable hooks make this song a hidden gem of the time.”

Arcaeon are premiering their new EP Balance exclusively with Metal Hammer, which you can listen to below! It’s on sale January 26 and is available to pre-order now.

The 10 best prog-metal albums, as chosen by Northlane