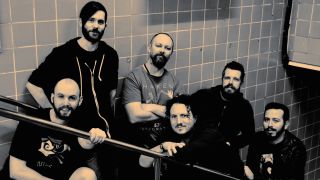 Earthrise (from Affinity)
Verses reminiscent of Yes’s 90125 era, minimally-worded choruses with potent melodies, and a reduction in the quantity of all-out shred make Earthrise the closest thing to a “radio single” that I’ve heard from Haken. I enjoyed the lighter fare on Affinity more than the outright prog, which sits in contrast to my views on the three previous albums and one EP.

The Endless Knot (from Affinity)
Love the verse vocal rhythms and lyrics in this song. A strong driving tempo, cool industrial moments, and a tasty guitar solo. Diego’s keys on this track lean towards a modern-rock-meets-EDM style, and every sound used enhances the song structure.

Bound By Gravity (from Affinity)
Such a beautiful ambient song. Whether the “love” aspect is a personal and romantic commentary, or instead a more expansive and worldly one, there is an emotional focus here that exemplifies the band’s diversity (contrast this with the more avant-garde lyrical leanings on the Aquarius album).

Crystallised (from Restoration EP)
Reworked from an early Haken demo song, this sublime epic has a marvellous flow between hard rock riffs, Yes-style vocal harmony sections, djent moments, and a bombastic symphonic rock outro. Even gets a literal gong at the end from Mike Portnoy!

Atlas Stone (from The Mountain)
My favourite overall piece of music that Haken have recorded, from the most critically acclaimed album. Love the piano intro, the motif of which carries through the intro and verses in recontextualised forms. Excellent chorus, one of their best! I enjoy the jazzy second fifth of the song, and the darker fourth fifth of the track and the key change chorus couldn’t fit any better than they do.

In Memorium (from The Mountain)
This song has my favourite hard-rocking, indeed dank eight-string guitar riffs from Haken, and “tearing down the walls of eternity” as a chorus is close to my favourite from the lads. A single-length song, and it does feel like it is over all too quickly.

Insomnia (from Visions)
Visions was the first Haken album I listened to, and after enjoying the opening two tracks, it was Insomnia that had me thinking “this is the best new prog metal band I’ve heard in a very long time”. Love the Nintendo music section! Being an insomniac myself for much of my twenties and early thirties, I really connected with this song (nowadays I just snore a lot, apparently!).

The Mind's Eye (from Visions)
Straight after Insomnia, this song calms the album tone down perfectly, before going back into the DT/Symphony X-style prog on the track Portals. I noticed Ross’ vocals sharing some of the soft traits of Ian Kenny’s voice, which pleased me given my enjoyment of our local lads Karnivool. As I went backwards with Aquarius and then forwards with the newer albums, I experienced and marvelled at the broader Haken palette, but my first impression of Haken was “the best aspects of Dream Theater fronted with Karnivool’s vocals”, which made me an instant fan!

Shapeshifter (from Visions)
The third part in a seeming trilogy with The Mind’s Eye and Portals, Shapeshifter is for me the most singable long song in Haken’s repertoire, which might cement it as my favourite Haken song; it’s hard to pick a favourite.

The Point Of No Return (from Aquarius)
Completely on a different plane to the material from Visions, and I think the guys have themselves used the term “circus music” to describe a part of their sound in this early part of their career. A wacky storyline about a mermaid being discovered, a segment of almost-grind vocals, more prominent fretless bass lines and tapping, lounge piano, the big Symphony X-ish run, even a Simpsons-esque moment; you can hear the influences, but the compositing of these seemingly disparate ideas is very well done for a debut album, and the production is excellent. A fun way for a band to start a recording career in prog, and it’s followed by a song that starts with Genesis and Kansas influences, so I got hooked just like a fish (or mermaid) in their aquarium.