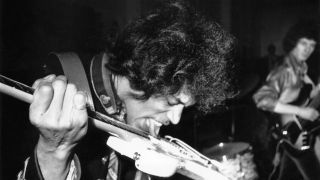 Jimi Hendrix still continues to cast a long shadow across the world of music. A guitar firebrand, but one with the song writing smarts to inspire a generation of players who, to this day, still attempt to revive the late guitarist’s spirit through his enduring canon of music. Below are, we think, ten bands and musicians who got it just right.

Before you throw your iPad out of the train window in disgust, take a moment to marvel in childlike wonder at Toto’s (okay, Steve Lukather’s) from-the-sublime-to-the-ridiculous approach as he attacks the Little Wing solo the way a dog goes after a biscuit. Admittedly, there’s no way we can defend the shirt he’s wearing, but close your eyes, tilt your head back and let the music take you.

What better way to induct the late and great Jimi Hendrix into the Rock and Roll Hall of Fame than with a genuine supergroup? Made up of former Experience man Mitch Mitchell, Steve Winwood and the ever ubiquitous Slash. It’s easy to dismiss the cat in the hat as someone who’ll show up at the opening of an envelope, but there’s no denying the grace and thrill of the solo he delivers here.

A long time staple of their live set (I first saw them perform it live as the encore on the London show for the Uplift Mofo Party Plan album when they came on to encore with just sport socks to cover their modesty and would later cover it on Mother’s Milk), Hendrix’s original on the Are You Experienced record was simply titled Fire though the single version, confusingly, carried the title, Let Me Light Your Fire. Either way, it burns!

No matter what you might think of the baby-faced blues assassin that is John Mayer, his superlative and utterly sublime take on Hendrix’s heart-breaker is one for the ages. Recorded for the Live In The X Lounge series of charity albums (created by the now defunct Alabama station WRAX), Mayer’s lament is perfect testimony to the Hendrix legacy.

Joe Bonamassa - Are You Experienced?

More familiar these days as the man taking the blues to the masses (and by masses we mean sports arenas in places like Idaho), this clip of Joe Bonamassa (and his impeachable band) sweating it out in a club somewhere and wringing the dear life out of arguably Hendrix’s most inventive and innovative song (the original featured reversed guitars and drums all built around a drone) is a work of sheer bloody wonder.

Recorded in 2004 for The Strat Pack: Live In Concert to mark the 50th Anniversary of the Fender Strat, Moore (alongside the great and good of the guitar world, including Joe Walsh, Brian May and David Gilmour, plus a house band to die for) pays brilliant homage to the spirit of Hendrix with this rip-roaring take on Red House.

From the band’s 2011 nationwide Live In Concert album, this ecstatic take on the Hendrix classic rides high on Randolph’s peerless pedal steel guitar play and The Family Band’s heady mix of funk and soul. Plus, that boy can really sing. It’s also worth checking out the the version of Crosstown Traffic that he performed with Soulive, it’s powerful stuff.

Recorded live at the Montreux Jazz Festival in 2001, the Power Of Soul (the studio version of which can be found on the posthumous odd and sods collection of demos and alternative takes album, 1997’s South Saturn Delta), though Living Colour’s thundering version owes more to the live Band Of Gypsys take on the song when it was still called Power To Love. Either way, Vernon Reid’s impeccable playing channels the ghost of Jimi, taking the song to ever new heights.

Though his take on Little Wing can make a grown man weep in the space of eight bars, it’s Stevie Ray Vaughan’s eight minute reworking of Voodoo Chile that leaves the onlooker gob-smacked. Drifting and lazy - those open bending chords - and then the constant chugging riff leading into the beautifully histrionic solo. Not a note wasted and truly one of the great love letters to Hendrix’s musical estate.

What would Jimi Hendrix have done next?