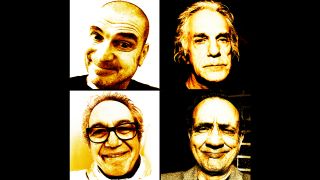 In 1979, something filthy crawled out of the gutters of San Francisco. Sleazy, grimy and hella noisy, Flipper emerged from SF's sprawling underground to turn noise rock on its head with their belligerent, experimental jams.

But they never quite got the dues they were owed. Having been through numerous deaths, personal issues and members – including Nirvana's Krist Novoselic and, apparently, Moby – they remained an underground concern while their contemporaries began to break through to the mainstream.

One thing that can't be argued, though, is the huge influence they had on the music and bands around them. A direct influence on Melvins and Nirvana – and so, the legions of bands they subsequently influenced – they can count the likes of Henry Rollins among their fans, and have been credited with kicking the sludge sub-genre into gear.

As so often happens, as the years passed, so their legend grew. Now, to celebrate 40 years of their innovative and influential music, Flipper are swimming back onto European shores – this time with Jesus Lizard vocalist David Yow and bass impresario Mike Watt in their ranks.

Here, Minutemen founder Watt talks us through his favourite moments in the long and storied life of the sludge rock pioneers.

"Big love for Flipper being able to let you know it's them with nothing but their own personal expression – I've always dug this about them and the reality of the dealio regarding identity. They don't stoop for jive shill, they let their freak flag fly and I love it.

This tune here has a righteous riff for the bass, working the tritone and keeping high up on the neck cuz of the E-flat destination... I guess someone with a five string bass could play around with it lower but Watt don't work five strings, haven't found a need and definitely Flipper doesn't need.

The words are most happening Flipper questions for the people, to engage, [to get] them to think for themselves... It gets my fist way up in the air for it."

"More thinking-out-loud questions for the listeners and the gig-goers... Flipper spiel has got a conversational side to it which I'm way into, 'pert-near like you've known the singer-man for quite some time which in fact you don't.

I guess it's about relating but never groping at the short and curlies for some kind of lame shortcut around the truth. 'Pert-near whole tone, the bass is driving the tune while doubling up as the skeleton for Ted Falconi's fleshy guitar and Steve Depace's drummer guts, to get them to both fit good."

"Way into the creep here of the bass line, a good change-up for Flipper – like trading the desert in for bayou. The intervals are trippy too... I think this tune goes way back for them. Love Steve Depace's tom roll rolling down the canal – doing what it takes to get you there.

Kind of an interrogation on the state of being from the tune's protagonist, it's us listening in rather than joining in where we explore ourselves – or maybe that's the point, right? The real love canal was fucking polluted. Crimony."

"I remember the Minutemen opening up for Flipper at the Ten Street Hall in San Francisco in 1981... This tune always makes me think of that night, 'cos after we got done playing we got hit with some batteries (c-cells, fuck). I've been hit with cups of piss, sacks of shit and puke and even used condoms, but damn, batteries hurt.

Anyway, me and D-Boon were out in the crowd for Flipper's set and every time the chorus came around, we'd look at each other and nod our heads while we were pogoing as if to let each other know, 'Yep, that's the way it is.'

A fucking anthem I would have no problem standing up for."

"For me, this is Flipper singing the blues. It's got that trippy tritone thing in there but still, I feel the blues... It's like if The Stooges were accidentally doing a version of their tune Fun House when their Dirt was actually what they had meant to play. It's a heavy throb for me and what a fuckin' bitchin' chance to be in "the boloney seat" between Ted Falconi and Steve Depace, glueing this sludge surge into a slurry
that needs no casing!

Flipper is full of feeling for Watt, FULL OF FEELING and I love it!"

Flipper (featuring Mike Watt and David Yow) head out on tour this week. Check them out at one of the dates below: