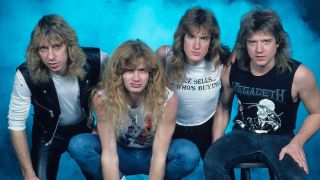 Formed soon after his dismissal from Metallica in 1983, Dave Mustaine began Megadeth with the sole aim of being “the world’s state of the art speed metal band”. Along with Slayer, Anthrax and his former bandmates, Megadeth have been responsible for shaping metal as we know it today. And, some 33 years after their formation, the band are on rude form, as evidenced by their most recent full-length release Dystopia.

Here then, are the band’s 15 studio albums in ascending order of greatness…

It was all going so well, wasn’t it? The follow-up to the widely acclaimed Th1rt3en should have been another corker, not least because Dave Mustaine’s mojo was very much perked up after his band’s mid-noughties revival, but Super Collider was a hideous disappointment. Plodding, banal and lacking testicular fortitude, it was a half-arsed attempt to strip things down to hard rock basics and, one or two half-decent tunes aside, it went down spectacularly badly with even the most diehard ‘deth-heads. Yawn.

Despite its reputation as a career-wrecking, St. Anger-style clanger, Risk is nowhere near as bad as you may have been led to believe. Admittedly, Dave Mustaine’s half-hearted attempts to appease so-called alternative rock radio in the US did lead to some rather daft filler tracks – Crush ‘Em, in particular, is a calamitous sack of arse – but Prince Of Darkness and the closing, two-part Time are genuinely great and Breadline is insanely catchy. A mixed bag rather than an outright turkey.

The return of bassist David Ellefson buoyed the hearts of many a Megadeth fan, and while The World Needs A Hero was no kind of classic, it certainly repaired some of the damage done by the confused and patchy Risk. Boosted by the one-off involvement of noted shredder Al Pitrelli, songs like Dread And The Fugitive Mind and Disconnect paved the way for the greater creative triumphs that followed a few years later.

Celebrated primarily for Trust, a stone-cold classic Megadeth single and a truly great album opener, Cryptic Writings inspired neither devotion nor much vitriol among the band’s fanbase. Arguably the last time the Mustaine/Friedman/Ellefson/Menza line-up fired on all cylinders, tunes like She-Wolf and Almost Honest may not rival the band’s greatest classics, but they still rule. The rest is good but not great.

Released two years after Dave Mustaine had effectively disbanded Megadeth due to a serious arm injury, The System Has Failed emerged to suggest that the ginger magician’s recovery was very much underway. Originally intended as a solo record, The System Has Failed is as vicious and progressive as anything the band have produced, albeit slightly lacking in killer hooks. The involvement of former guitarist Chris Poland certainly gave old school fans something to cheer about, too.

Newly signed to Roadrunner Records, Megadeth did the decent thing and continued their creative recovery on their 11th studio effort. United Abominations signified a thrilling return to form: from pulverising opener Sleepwalker and the fiery Washington Is Next! through to the snarling Burnt Ice, it was an exercise in supreme confidence, refined songwriting and proud, purposeful heavy fucking metal. The only downside was a slightly pointless re-recording of A Tout Le Monde featuring Lacuna Coil’s Cristina Scabbia. You can’t win ‘em all.

Many fans baulked at Megadeth’s deliberate drift into less thrashy, more mainstream territory, but with hindsight Youthanasia is a very strong record and one that makes a lot more sense than the similarly-inclined but genuinely dreadful Super Collider. Some of the band’s finest ‘90s cuts are contained within: Train Of Consequences, Addicted To Chaos, Reckoning Day and A Tout Le Monde are all certified monsters and Blood Of Heroes is one of the great unsung Megadeth tunes.

Following the mind-blowing Endgame was never going to be easy, but Mustaine’s ability to churn out rampaging anthems was much in evidence on this diverse but destructive slab of prime Dave. The best moments are as good as anything Megadeth have done since the ‘80s: Public Enemy Number One, Whose Life (Is It Anyways?), Black Swan and New World Order… ripsnorters all, and even closing quasi-ballad 13 exuded a certain menacing charm.

Despite its vexed production and the inclusion of a frankly dismal cover of the Sex Pistols’ Anarchy In The UK, Megadeth’s third album remains a revered classic and a laudable bridge between the nascent brilliance of Peace Sells and the genre-defining mastery of Rust In Peace. Epic and adventurous on In My Darkest Hour and Set The World Afire, brutal and snotty on 502, Liar and Hook In Mouth, SFSGSW was an uncompromising statement and it still slays today.

A surprise inclusion this far up the list, perhaps, but while nostalgia will always nudge us towards older records, Dystopia is genuinely one of Megadeth’s finest albums and a timely reminder that few people know how to write and perform face-flaying thrash metal like Mustaine and his cohorts. Kiko Loureiro and Chris Adler’s contributions are undeniably significant, but it’s the sheer power and ingenuity of songs like The Threat Is Real and Death From Within that confirm Megadeth’s ongoing greatness.

In terms of refining and defining the thrash metal template, Dave Mustaine is unquestionably the genre’s kingpin. Aside from writing at least half of Metallica’s Kill ‘Em All, he also created his own band’s debut album: a fast, furious and relentlessly pissed off assault on the senses that haughtily upped the ante for the entire metal scene. More technically impressive than the rest and driven by fury and revenge, Killing… revealed that Megadeth were a unique and formidable proposition.

By any sane reckoning, Megadeth’s most commercially successful album is a classic. With Marty Friedman and Nick Menza on blistering form and the Mustaine/Ellefson axis as potent as ever, everything from exhilarating opener Skin O’ My Teeth and the grim stomp of Symphony Of Destruction through to the angular prog-out of Ashes In Your Mouth brimmed with confidence and intensity. The tunes were massive, the lead guitar trade-offs took the roof off and world domination was inevitable.

Dark, raging and vastly more inventive than anything else that was going on in the thrash scene, Peace Sells was a fearsome affirmation of values and skill that enabled Megadeth to snap at Metallica’s heels for the first time. Songs like Wake Up Dead and the immortal title track are so firmly established as classic speed metal anthems that it seems a bit redundant to sing their praises again. But let’s do it anyway. Peace Sells fucking slays.

Megadeth fans were full of optimism as the band readied their 12th album, but no one was expecting Endgame to be as straightforwardly magnificent as it turned out to be. Everything fell into place on this towering slab of modern metal: producer Andy Sneap weaved his usual magic, Dave Mustaine wrote some of his finest ever songs and every last musician played his merry bollocks off throughout. Whether delivering total thrash euphoria (This Day We Fight!) or plunging into dark, progressive waters (Endgame), this was an unequivocal triumph and one of the finest metal albums of the 21st century so far.

Something magical happened when Dave Mustaine and David Ellefson joined forces with guitarist Marty Friedman and drummer Nick Menza. Rust In Peace is one of those albums: a masterpiece with no obvious flaws, not an ounce of filler or flab and some of the most obscenely thrilling moments in all of recorded metal history. Holy Wars… The Punishment Due, Hangar 18 and Tornado Of Souls may be the obvious highlights, but the entire record still leaps from the speakers 26 years later, sounding supremely arrogant and startlingly powerful. But beyond its hallowed contents, Rust In Peace is a seminal work because it completely upgraded metal’s sonic vocabulary, heroically raising levels of precision, technicality and compositional suss and kick-starting the ‘90s with a sustained blast of immaculate, state-of-the-art savagery that continues to send shockwaves through the metal world today.