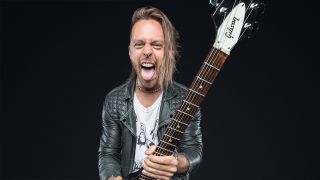 Long before he recorded five chart-bothering albums with Bullet For My Valentine, and long before he lifted his guitar aloft in front of 12,500 people at Wembley Arena, Matt Tuck was a teenager on a mission. Newly fired-up by hearing Metallica, he hatched a grand plan to follow in the footsteps of his thrash idol, James Hetfield.

“I remember setting up a little car-washing business on my street and just went and knocked on doors,” he remembers with seriousness. “I saved enough money to go to the local music store in Bridgend and bought my first guitar.”

Little by little, 14-year-old Matt taught himself to play along with Metallica songs, before branching out to other bands and finally on to writing his own music. Clad in denim and leather and ink, he might look every inch the ready-made guitar hero today, but he served a long, self-imposed apprenticeship.

“It was a life choice. There wasn’t a Plan B, because I sacrificed a lot to follow something, and I was very much aware that I was doing that – as were my parents, to their dismay and horror,” he acknowledges. “They knew I was talented and they could see I loved it, so they never once told me not to do it. But as a parent myself now, I can see that would have been an ‘Oh shit’ moment…”

It was this self-starting spirit, combined with a fortuitously receptive climate, that helped Bullet For My Valentine find success. When they released debut album The Poison in 2005, the haters only saw bratty upstarts with wallet chains, but their fans, primed by nu metal and rock clubs, were thrilled by their combination of melodic hooks and heritage influences. Matt was bringing the idea of a proper, guitar-toting frontman back into metal, steering his band to glory with that single-minded focus he still possesses today.

“It was the right place at the right time for our band,” he remembers. “Between ’98 and 2005, it was very much the Korn, Limp Bizkit era. Before that, it was grunge. And then it was the return of the metal band, really. The timing was right for us, and a lot of bands like Trivium, Killswitch and that. There was a big surge of this more technical, old-school-sounding record but in a modern way.”

Scream Aim Fire capitalised on that sound in 2008, taking them to bigger venues across the globe, while 2010’s Fever kept the momentum going and catapulted them into arenas. But for 2013’s Temper Temper, Matt controversially jetted off to Thailand to write with then-drummer Michael ‘Moose’ Thomas; the rockier record missed the mark, and sent their stock plummeting. So much so, that 2015’s Venom was a concerted return to full metal speed and biting aggression – a middle finger to anyone who thought they’d lost their way.

“We played a bit of a game on that one,” Matt admits. “We knew what we needed to do to get people buzzing again after the Temper Temper thing. We were going, ‘OK, why didn’t this work, and what can we do to rectify it.’ And it was like, ‘Let’s just turn it up to 10, and get the foot back on the pedal, and show people what we can do.’”

Course corrected, Venom’s touring cycle took them from an intimate UK run to massive European festivals, and ended on what appeared to be a high, with two nights at London’s 5,000-capacity Brixton Academy in December 2016. But there was a dark side to their victories. Moose had stopped touring with them earlier that year ahead of the birth of his daughter, upsetting the band’s foundations (his eventual departure was announced in December 2017), while Matt himself had been struggling at home. Everything spilled out, guts and all, into new album Gravity.

“As clichéd as it probably sounds, this is my break-up record,” Matt explains. “I’ve gone through a really hard time behind the scenes the last couple of years with the breakdown of my marriage, and all the turmoil and emotional baggage that comes with that. It’s not something I ever thought I would have to experience, and have a young family and try to keep the band on the road while this was going on, and the Moose thing would happen… When we finished those two nights at Brixton and it was all high-fives, I found myself at home by myself with no real purpose or direction. I slipped into depression – nothing too heavy, thankfully – and April came around and I started to try and make music. So me being me, I wanted to do something different.”

Gravity is a wholesale departure from Venom’s thrashy formula, metal giving way to clear-cut melodies, electronic highlights and red-raw lyrics. Keen to push out of his comfort zone and disrupt Bullet’s sound, Matt took writing trips to hook up with outsiders such as US producer Drew Fulk and the UK’s Matt Schwartz. He estimates 80-90% of the record was written by him alone, with someone else in the room, whether it was producer Carl Bown, guitarist Michael ‘Padge’ Paget or bassist Jamie Mathias. Just like 14-year-old Matt, he had a vision for his future and single-mindedly pursued it.

“It was far more of a band effort on Venom, but this time around, it was pretty much me leading from the front. I had to be more of a dictator than usual, and it was quite frustrating for me, and it was also very frustrating for the boys, as you can imagine,” he reveals. “The politics in the band can get quite stressful and weird at times, because you want to create something that everyone is onboard with and loves instantly. But this time around, a couple of the boys were really struggling to know what I was even on about.”

How did you bring them around?

“You’ve just got to keep going, when you believe in something so much. I believe that this was the right thing to do for our band at this point in our career. There was no way I was going to deviate from that. It didn’t come to the point where we were fighting or anything, it was just trying to get everyone positive about it and not be afraid of being brave.”

Early efforts from April to July came to nothing (“we were just throwing everything in the bin because it all felt too samey, like what we’d done in the past”), until they hit upon the upbeat, electronics-inflected title track and spiralled from there, eventually finishing the record in December. As part of his adventures in songcraft, Matt drew on influences like Linkin Park (“they never have guitar solos, it’s all about songwriting”) and the experience of new drummer Jason Bowld, formerly of innovative industrial British metallers Pitchshifter and also Matt’s side-project, Axewound.

“Jason is a multi-instrumentalist and was willing to try anything because of his history in bands like Pitchshifter,” he explains. “Looking back, they were so ahead of their time, it’s ridiculous. They were just a bonkers band that incorporated a lot of electronic and different musical and percussive styles, to make interesting, heavy and exciting music. It’s a little bit of that flavour that we wanted to incorporate. We wanted to make something that was the complete opposite of Venom.”

With this laser focus on songwriting, Matt’s been seriously analysing music in the past couple of years, plotting Bullet’s future trajectory and critically pulling apart the very fabric of metal. While Hetfield’s still up there as a cut-and-dried icon, Matt’s newest obsession is Muse’s Matt Bellamy, who’s taken rock into strange new places while retaining mass appeal and putting on monumental shows.

“I am never going to turn my back on metal, because it’s been my life for 20-odd years, but for me as a songwriter in the genre it’s all gone a bit stale,” he explains. “I’ve got to an age now, 38, where unique instrumentation and the way albums are produced and written has become more appealing to me. Someone like Matt can take a guitar and turn it into anything he wants it to be. Being in a metal band and watching 100 other metal bands, everyone’s using the same kind of techniques, scales and guitar tones – genre-standard things. For this new record, we’re trying to be different.”

Our time with Matt is coming to a close, and he’s about to do the school run for his eight-year-old son, family always a priority despite his demanding day job. On the way to addressing his relationship difficulties and mend bridges, and armed with a new record, this always-determined frontman is only looking forwards. Gravity is a chance to turn his back on the past and step into a brand-new destiny of his own making, fans and critics and anyone else be damned.

“A lot has gone on since 2003 when we started,” he reflects. “I don’t give a fuck what people want to hear, it’s what I want to write. It would be easy to fall into the trap of letting this band’s history try to write my future, but I’ve snipped that off – I don’t give a shit about the history. We think Gravity is a massive statement record for us, and we hope it will take us where we believe we deserve to be  – which is back in the arena circuit.”

Bullet For My Valentine are touring the UK and Europe later this year.

Bullet For My Valentine 2018 tour dates