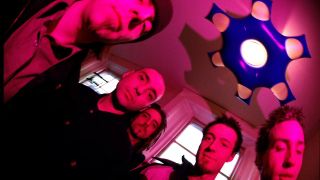 Credit where credit is due, a three piece, Godflesh knock-off from Nottingham in the early ‘90s really had very little chance of making their way onto MTV and some of the biggest festival stages in the world. But, in the end, Pitchshifter could have had so much more.

Forming in 1989, the band’s early composition of industrial grime was enough to see them tour with Napalm Death and sign to Earache Records for the release of the, fairly underwhelming, Industrial and Desensitized albums and the Submit EP. Although their recorded output at this point wasn’t pulling up any trees – the live show was a different story.

Pitchshifter were the first band to have their set pulled at the now defunct Phoenix Festival in 1995 as over-zealous fans stormed the stage, buoyed by their infectious energy and penchant for destruction (frontman JS Clayden would often take a sledgehammer to a grand piano onstage).

A year later they released the much improved Infotainment? album, which showed a slightly more melody-friendly approach by the band. Still, though, they were continuing to push the boundaries of heaviness, being one of the pioneers embracing the dance remix culture that was beginning to grow in the rock world.

It all came together in 1998 when, after The Prodigy opened the vortex of dance and metal to co-exist with Firestarter, Pitchshifter released their magnum opus www.pitchshifter.com. An album that melded the band’s love of cutting edge technology, leftist political leanings, stark mechanised industrial metal and Clayden’s Johnny Rotten sneer.

The boom and burst dynamics of first single Genius even made some headway on the mainstream chart, was picked up by MTV and suddenly Pitchshifter were on tour with Limp Bizkit in the US. It was no one trick pony either, drum ‘n’ bass-infused metallic bangers like W.Y.S.I.W.Y.G and Please Sir were utterly unlike anything that was happening in music at that time. Even their obvious peers Fear Factory struggled to sound quite so current. Pitchshifter had taken every niche movement in music and splatted it all together.

That they were not only subversive, but also British, seemed to oddly count against the band. At that time American nu-metal was ruling the roost and Britain had no answer. Pitchshifter could musically stand toe to toe with any band, but were never going to have the same WTF visual impact of Coal Chamber or Static-X.

Follow up Deviant offered more of the same, including a guest spot from Dead Kennedys’ frontman Jello Biafra who was obviously a huge influence on the band, and was a fine effort. Unfortunately by this time a certain band called Slipknot had released their debut and stole the thunder of anyone looking to establish themselves as the voice of the disaffected British youth.

The band’s commercial appeal was still on the up, as shows at Reading Festival and the touring US Ozzfest proved, but the wind had been knocked out of their sails somewhat. A fact that was evident on their final album (2002’s PSI) which showcased a band looking rather tired and uninspired. They split soon after, leaving many wondering what happened.

They reformed in 2006 and have been playing shows on and off since. Their website claims they are still an ongoing concern, although the lack of activity would suggest otherwise. But that’s fine, some bands aren’t meant to last forever. Some are meant to capture a moment and then fizzle out.

Listening back to Pitchshifter today only the most obsessive fan would deny that their sound hasn’t dated, but the walls they broke down, no matter how small or for how short a time, are seen today in the guises of many other British rock acts, Enter Shikari, Oceans Ate Alaska, TRC, even Bring Me The Horizon, who have the picked up the mantle they laid down and attempted to push the sonic envelope of rock further and further into varying directions. And for that alone, Pitchshifter should be celebrated.