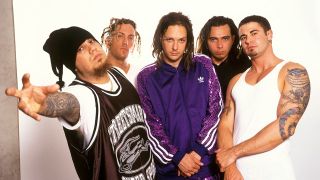 While some metal fans scoff at nu metal, those of a certain age hold a strong bond to the late 90s/early 00s explosion of baggy jeans and red caps. Welsh metalcore crew Continents grew up in the world of Limp Bizkit, Linkin Park and Slipknot, and are all big fans of Korn – which is why we asked them to pick the ten best Korn songs of all time. Below, vocalist Phil Cross, guitarist Rhys Griffiths and bassist Tim Vincent pick their favourite tunes from the genre-defining Bakersfield boys. Aaaaaare youuuuu reaaaddyyyyyyyy???

Phil Cross (vocals): “The concept of this song blew me away when I read into it further as I got older. Listening to it as a young kid, the energy in the video and hearing nursery rhymes, that blew my mind. Then as I saw interviews with Jonathan Davis and realised exactly why they wrote it made the song even darker than before – and really clever. As he explained in one interview, all nursery rhymes have evil stories behind them and Ring Around The Rosie is about the Black Plague! Kids sing these rhymes without knowing what they mean.”

Phil: “If you listen to bands like Emmure and Cane Hill, listen to this song. This song is everything – it’s built on rage and emotion. The lyrics are full of anger and I think everyone can relate to meeting a so-called friend that’s screwed you over in the past. Listen to the build up at two minutes in. You can tell Jonathan has some serious shit to get off his chest before the drop and Fieldy’s bass just sets it off.”

Freak On A Leash

Tim Vincent (bass): “I could talk about this song and album all day, along with the artwork by Todd McFarlane, who also directed the music video. The opening guitar line and drumbeat grabbed me straight away, as it was so different to anything I had heard. At that point, the only bands that were on my radar, were The Big Four. This was different, as it seemed to tap into a primeval part of the brain that more conventional types of metal didn’t touch. I remember hearing the build to the breakdown for the first time and being completely freaked out by the vocals. Without being ‘that guy’, I had never heard anything quite like it in metal. If that breakdown doesn’t make you bang your head, you need to have yours examined! Eighteen years on and it still has the same effect.”

Phil: “There are two versions of this, one with Chester Bennington on and the one in the movie Queen Of The Damned that Jonathan Davis sings – it’s on YouTube and Korn have performed it live. Jonathan and Richard Gibbs wrote a lot of the music for the film. I remember seeing it and being fixated during the concerts and music cuts for Lestat the vampire due to the strong lyrics and Davis’ voice – the whole thing was epic! I know it’s not Korn exactly, but they have played it live and for that reason you should listen to this certified banger. I read that Davis’ contractual commitments meant that his vocals could not appear on the soundtrack album. Instead, the vocals were re-recorded by other musicians for the soundtrack release.”

Phil: “I could have easily discussed Blind, but everyone knows that song and it speaks for itself. I read a story about how this track was apparently laid down while Jonathan Davis was high on drugs. The song was recorded by Ross Robinson who later did Slipknot’s self-titled release, and it’s so raw. You can see how this track influenced them and others. It also has those samples that show exactly how hip-hop influenced their sound was. When you listen to this track you can guess exactly who else recorded with Ross Robinson and why Korn are the pioneers of nu metal. To me, Korn defined the ‘90s with their sound they created something new.”

Phil: “I loved this track because the collab with Skrillex worked so well. It shows that Korn were still not afraid to shake things up, and they did it with style. I loved the fact they were open to breaking boundaries and not playing it safe. It still has that edgy Korn sound but in my opinion probably one of the biggest chorus hooks they have written to date. This track will always be on my running playlist.”

Phil: “I remember hearing this in a club for the first time. The lyrics really stood out to me as it’s about people constantly being ridiculed and the damage it can cause, such as the Columbine high school massacre, which the song is about. When you read the lyrics it’s a powerful song with a strong meaning of what consequences can happen when people are pushed to the edge and feel they have nowhere to go and can’t see a way out.”

All In The Family

Rhys Griffiths (guitar): “What an absolute belter! I loved two things growing up and that’s metal and hip-hop. This song was a perfect blend for me. Limp Bizkit were also one of my favourite bands, so hearing Fred Durst on a track along side Jonathan Davis was amazing. In typical Korn fashion, the opening riff is absolutely disgusting. It was one of the heaviest sounds I had ever heard and I couldn’t get enough of it. I remember watching every online video of it I could find. Follow The Leader had a huge impact on my life, and it was one of the albums that changed my music taste forever. It’s hard to pick a favourite from that album but All In The Family just nails it for me.”

Rhys: “Here To Stay is just so fucking raw and hard-hitting. As soon as I heard that opening riff, I instantly had the face you get when you smell shit or something horrible, and it’s still that sick to this day. There’s just something about the way Jonathan Davis flows his lyrics, it’s so catchy. His words really caught me as a kid growing up. ‘So I take my face and bash it into a mirror, I won’t have to see the pain.’ Now that’s how you grip the attention of an angsty 13-year-old kid into his heavy music. I just knew this shit was ahead of its time – those riffs, man! Munky and Head were killing it back then with their bold, unique guitar tone, it made me love the track more and more.”

Falling Away From Me

Phil: “This track is another where Korn started experimenting with the electronic sound. The intro to this song is so eerie, then when the chorus kicks in it’s so heavy and dark. I remember listening to it as a kid on my CD Walkman and it gave me goosebumps. I also loved the continuation of the video, with the closing animation from Freak On A Leash.”

Continents are releasing a new EP in early 2018, and you can watch their new video for Preacher below.

The A-Z Of Korn