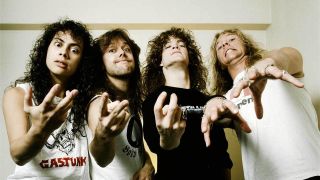 This feature was compiled by Saint Agnes’s Jon Tufnell and Kitty Arabella Austen. The band are currently on tour in The UK (dates below). Tickets are on sale now.

Jon: Narrowing down Metallica’s catalogue to a top 10 (or even 11) is not easy, but luckily this is something Kitty and I discuss on a fairly regular basis. We are huge fans. We love them like a best friend, someone you care deeply about. At times you can take them deadly seriously, and other times you laugh them. But it’s all done with affection.

They’re a true musical colossus, and we salute them. There’s some notable exceptions from this list, but we’ve tried to shine a light on at least a few of the less admired songs from their career. It goes without saying that nearly anywhere the needle drops on their records, you’re in for a treat.

Jon: Load is a great album. Far from being a sell-out, in my mind it was the most authentic thing Metallica could do. They needed to spread their wings, and with the huge commercial success they’d had on the last record they could easily have just done another Black album. But this was a brave move, and the songs feel genuine and the playing free and loose.

The Outlaw Torn is the perfect album closer, a slow burner that has hints of their love for Ennio Morricone shining through. The chorus makes me feel like I’m stood on top of a mountain like a fucking god, and Lars’s drum build-up to the guitar solo is just vibing brilliance. That guitar solo is my favourite of Kirk’s, and pretty much matches with my own approach to guitar. It’s totally different from his normal style (well, there’s still wah, but you get the point) and gives me goosebumps every time.

Jon: The album version of this track is so fiery and again has elements of Ennio Morricone. However, the live version from S&M is just incredible, with the added power of the orchestra. The fact they open the show with it – going from James’s finger-picked intro to full on fuzz bass wah riffing with the whole orchestra at full tilt behind them – is awe inspiring. You can see on the live performance the absolute passion and conviction they have as they suddenly realise that this experiment is working and it’s going to be a near religious experience. Hats off to Michael Kamen (RIP) for the obvious love and care he put into the project. I cannot fault it. and it is one of my favourite ever live albums.

Jon: A top 10 for the ‘Talli boys could easily just be all the tracks from Ride’ with the first two played a second time, but in the interests of the article we’ve had to cherry-pick some classic moments. Creeping Death is the perfect stadium thrash metal banger. It delivers on every level in terms of riffs, hooks and the best ever crowd-pleasing chant with the ‘DIE DIE DIE’ bit in the mid section.

Kitty: I miss seeing Jason’s veins burst out his head when he used to sing this part, but regardless, the album version added the majestic part of Metallica’s sound that wasn’t quite there on Kill ‘Em All.

Jon: A song about the folly of war and the sacrifice of young men to futile causes that sounds like a machine gun at close range. It allows you to perfectly picture laying in mud terrified of the chaos around you. James’s passion feels totally genuine and the riffing relentless, but the song still has an incredible hook. I also love the way James says “You blindman” in the chorus. It’s a great moment for mouthing the words and making a black metal grimace at each other. If you’ve not done this I recommend it.

Jon: Such a controversial album, but, whilst flawed, I think there is a lot to love about it. Just as everyone else was making precise, quantised, edited-to-submission metal, Metallica took a chance and made the rawest and arguably bravest album of their career. To me the record is totally tied to the Some Kind of Monster film, which is fascinating, hilarious, cringeworthy and inspiring in equal measure. That film confirmed my long held belief that Lars is my favourite member. Why? That’d be a whole other essay, as that guy seems to need a lot of defending, but Kitty and I are willing to go on record saying we love him.

Kitty: It is true, I love him. I have a t-shirt with just his face on it. It does look a little like Phil Collins, but I wear it with pride nonetheless. For anyone who needs convincing, watch Mission to Lars. The production on St Anger is so heavy, so untidy, with every buzz and rattle in the room being left in the recording. This is an approach too often ignored in metal in favour of sterile mixes, only bands like Down, The Dead Weather or The White Stripes seem to harness the power of this style, but it is something we feel strongly about as it makes the music feel real. It is how we approach our own recordings. The production on record feels weighty, aggressive and from the heart, and contains some of the band’s best riffs. St. Anger, the song, gets me fired up every time and I think James’s vocal is incredible.

Jon: People applaud Bowie for his ‘cut-up’ method of creating, and I feel this was how (maybe unwittingly) this album was made. Raw jams thrown together and spliced to create something unique and refreshing. I even like the snare sound.

Jon: So much youthful energy coming through on this song. A song about getting neckache from head banging. Something we can all relate to, right?

Kitty: I call it ‘rock neck’, and have to build up a tolerance for the first few days on tour. This song is any touring rocker’s anthem.

Jon: A close contender from this album might have been Anesthesia, Cliff’s solo. It was just so audacious and against the grain. Cliff is such a hero and an inspiration that I cry a little inside every time I think about the guy. By all accounts he was a true one-off, and it’s heartbreaking he was taken from us so soon.

For Whom The Bell Tolls (Ride The Lighting)

Jon: When everyone else was just trying to be faster and faster, Metallica had no fear of slowing down and adding some grind. Such a simple song, but so powerful. The lead hook being played on bass and then waiting that long to build the atmosphere before singing works so well, and is the reason why it is such a live anthem. Lars has a great groove on this song and Cliff’s contributions elevate the song to another level. A perfect Metallica gem and the stereo panning “on, on, on” in the chorus is such a simple and cool moment.

Special mention goes to the live version seen on Cliff ‘em All where Cliff Burton is captured in full flight in his prime. The band’s punk attitude to metal, playing hard and with fire, without concern for slight errors and slips, is again something I find inspiring and is how we approach live shows.

Kitty: In most of our rehearsals someone will sneakily start playing bells and we all kick in to it. It’s glorious.

Jon: Another brilliant slow-burner from Load with possibly my favourite vocal from James. The way his voice slightly breaks in the choruses is perfect. Kirk’s slide playing is really tasteful and Lars’s style of playing around the vocal really comes to the fore on this song.

Kitty: Kirk’s solo is great, especially halfway through when the chorus chords come in and he plays a variation of the vocal line. So simple, so powerful, just beautiful!

Kitty: So much heavy grind! Slower is heavier and this song is proof. The part near the end when they go to the main riff as James sings “I’m youuuuu-ahhhh” and the riff slows down a few bpm is just perfect. In the words of Lars himself, “Now that’s the shit that gets my dick hard.”

Don’t Tread On Me (Metallica)

Kitty: Like a lumbering cave-troll of a song. That swung swagger has elements of Sabbath and Zeppelin and is just so chunky sounding. I think this song could have fit well on …And Justice For All, but I’m glad it appeared on this album as the low end is thick enough to chew.

Jon: I agree with Kitty, this song just rolls along with no regard for anything in its path. The West Side Story riff at the start sets a great tone too.

Kitty: There’s a few songs on the new album that do it for me – Hardwired, Moth Into Flame, Spit Out The Bone – but this one has a Sad But True kind of feel and I love the unselfconscious tribute paid to one of the bands greatest heroes, Lemmy. It gives me goosebumps.

Jon: Imagine how good it’d have been if it’d had the St. Anger production! I like the new album too, I just hope they move to a more natural sound, or surprise us with a whole new one on the next record.