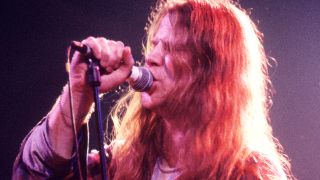 For a man often depicted by the press as a lone wolf, singer Mark Lanegan has been unusually collaborative throughout his decades in the music business. There have been albums with Queens Of The Stone Age, Greg Dulli, Isobel Campbell and Soulsavers, and guest appearances on records by The Breeders, the Eagles Of Death Metal, Masters Of Reality, Mike Watt and Creature With The Atom Brain, to name but a few.

And, of course, there’s his time as leader of Seattle’s hugely influential proto-grunge lords Screaming Trees, and half a dozen riveting solo albums that draw from the deepest recesses of folk and blues. “Basically,” he says, “I’m always singing about the same stuff, whether it’s in a loud or a quiet outfit.”

Lanegan’s music, which he once memorably equated to “throwing a little darkness on people”, can be both unsettling and strangely moving. His is one of the great singing voices in modern rock; a rusty carburettor sound capable of imbuing even the slimmest lyric with real gravitas.

Born in the Washington suburb of Ellensburg in 1964, a troubled teenage life led to heroin addiction and a year-long spell in prison for drug-related misdemeanours. In 1985 he formed Screaming Trees with Van and Gary Lee Conner and Mark Pickerel. Four albums of slanted, heavy-duty rock led to a major-label deal with Epic in 1991, yet success for the band proved oddly elusive. By the end of the decade, Screaming Trees were all but over, and by then Lanegan was already several albums into a solo career.

In 2000 he turned up on Queens Of The Stone Age’s Rated R, signing up as a full-time member of the band the following year. He also squeezed in another project, joining buddy and Afghan Whigs mainman Greg Dulli in the Twilight Singers, before the pair struck out alone as the Gutter Twins. Perhaps unsurprisingly, he quit QOTSA in 2005, though he continued to sing on their albums and occasionally tour with them.

Factor in a downtempo album of electronica with northern upstart duo Soulsavers and three albums of delicious desert-noir with ex-Belle & Sebastian star Isobel Campbell and you wonder how he has time to do any of it, let alone maintain a high level of consistency.

Blues Funeral, his first solo album in eight years, sparked a period of prolificity, with three albums – 2013's Imitations, 2014's Phantom Radio and 2017's Gargoyle – released in quick succession in the years following it. Now, Lanegan's new album, Somebody's Knocking, is due to drop in October.

So who is the real Mark Lanegan? “I’ve done it a lot of different ways,” he once said. “My ex-wife said I have several different personalities – and none of them good.”

The sixth and best album by the Screaming Trees was a winning mix of West Coast grunge, knotty punk and 70s hard rock. It should have put the band on a similar commercial level as Nirvana, yet it didn’t pan out that way.

Big hooks and sharp riffs abound, not least on big hit Nearly Lost You, which gained traction from being on the Singles compilation. The album also marked out Lanegan as both a gifted songwriter and a consummate frontman, who invested the songs with a menace and mood that cut deep into American roots territory. Dollar Bill is another highlight, while For Celebrations Past found him channelling some ancient spirit like a latter-day Jim Morrison.View Deal

Lanegan may have still been a member of QOTSA, but Bubblegum was the undisputed highlight of his solo career thus far. Not that he was entirely alone – PJ Harvey fetches up on Come To Me and pulsating duet Hit The City, Izzy Stradlin and Duff McKagan add ballast to the wonderfully weary Strange Religion, and Josh Homme rams a knuckleduster into the clanging rock of Methamphetamine Blues.

These redemptive songs of lust, longing and drug psychosis are at times scuffed and melancholic, at others inflamed and scary. Also aboard are old mucker Greg Dulli, QOTSA’s Nick Oliveri and former Mrs Lanegan Wendy Rae Fowler.View Deal

Having had a cameo on QOTSA’s Rated R, Lanegan’s contribution to the desert rockers’ third album was more substantial, co-writing and/or singing lead on five tunes.

Songs For The Deaf was a loose concept piece that barrelled through California, accompanied by fictional visits from small-town radio stations. As such, Lanegan’s oddly carefree vocals brought a Biblical weirdness to God Is In The Radio, while Hangin’ Tree was fairly dripping with barely concealed malice. He’s also to the fore on both the title track and Song For The Dead, intoning over the din like some malignant sprite.View Deal

The bonds between Lanegan and ex-Afghan Whigs man Greg Dulli run deep. They began playing on each other’s records around the turn of the millennium and toured for a while as the Twilight Singers. (Dulli also credits Lanegan with saving him from a potentially lethal cocaine habit.)

The Gutter Twins found the pair united as the self-styled “satanic Everly Brothers”, taking turns at the mic for a set of gloriously doomy, post-grunge songs fed by a shared taste for life’s forbidden fruit. Lanegan excels on the anthemic Idle Hands, and the buzzing Bête Noire, in which he moans at the moon like a lost hound over an ominous beat.View Deal

His solo debut The Winding Sheet saw Lanegan dispense with the noisy rockisms of his Screaming Trees persona, but his new career didn’t really begin to fly until this ravishing follow-up.

The mood is almost uniformly dark, Lanegan essaying boozy tales of sorrow and defeat with a voice that sounds like a busted squeeze box. It’s as close as he ever got to making his own down-home album. Breathy whispers, strings and acoustic guitars poke through the porch light, while songs like Pendulum herald the arrival of Lanegan the literate poet, with a reach and breadth only hinted at previously.View Deal

The Trees’ swansong came four years after Sweet Oblivion, and in the wake of scrapped sessions with producer Don Fleming. Dust actually turned out to be more of a signpost to Lanegan’s solo career than the guns-blazing final huzzah that fans may have envisioned. There’s a haunting blues quality to much of the album, though it’s undoubtedly the razor-backed product of a band with a steady grip on rock dynamics, the Eastern flavours of the outstanding Halo Of Ashes and the ringing Dying Days being undeniable proof.

The band didn’t officially call it quits until 2000, but Dust proved to be a worthy send-off.View Deal

The third and best collaboration with the former Belle & Sebastian singer continued the duo’s fetishistic pursuit of the Old West, with Lanegan playing leathery Lee Hazlewood to her purring Nancy Sinatra. It was an unlikely union, but it worked well.

Campbell’s dust-caked songs and stirring arrangements provide the ideal vehicle for Lanegan’s lived-in growl, be it the acoustic blues of You Won’t Let Me Down Again, Time Of The Season or the boot-heel bluster of Get Behind Me. Snake Song, too, is suitably venomous, though Lanegan comes on like a bruised Appalachian romantic on Eyes Of Green, complete with fiddle solo.View Deal

QOTSA’s breakthrough album, Rated R marked the start of the band’s long-running association with Lanegan, who has gone on to appear on every album since.

The music itself carried strong traces of the Trees (no doubt helped by the involvement of their ex-drummer Barrett Martin), though their old singer’s role was somewhat subsumed by the success of Lanegan-free singles Feel Good Hit Of The Summer and The Lost Art Of Keeping A Secret. That said, his gruff vocals on In The Fade render it reassuringly potent. He also added back-ups to Leg Of Lamb, Auto Pilot and Homme’s personal favourite, I Think I Lost My Headache.View Deal

Co-produced by Jack Endino, the man behind Nirvana’s Bleach and Mudhoney’s Superfuzz Bigmuff, Buzz Factory is the best example of the Trees’s early output on SST. There are heaving great riffs, and the music carries a raw, unvarnished quality, veering from the Soundgarden-ish Black Sun Morning to the Stooges-like Subtle Poison. It’s very much the sound of a band in transition, Lanegan’s baritone yet to acquire its unique sense of command and presence. There’s plenty to admire, though, not least Where The Twain Shall Meet and Flower Web.

Buzz Factory was the band’s last album for SST, after which they went briefly to Sub Pop before a more extended tenure with Epic.View Deal

Ever since his Screaming Trees days, Lanegan was synonymous with a dark, dusty, dangerous corner of the American musical landscape. So it was a bit of a surprise to find him, on his ninth solo album, ensconced under the grey skies of 1980s England.

From the deep, chiming gothic guitar of opener Harvest Home to the chilly synths and Hooky bass line of Floor Of The Ocean, on Phantom Radio he channelled Joy Division, Echo And The Bunnymen and The Cure alongside Depeche Mode at their most downcast.

And then, of course, there’s that voice. Always threateningly beautiful, if anything Lanegan proved here he was getting better with age – grittier by the year, and more soulful, while retaining the melancholic warmth that made his previous projects so special.View Deal