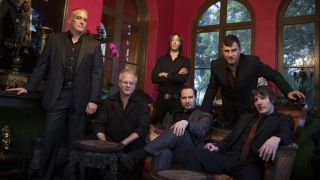 At their peak – roughly speaking a five-year period spanning their career-defining ‘Gentlemen’ (1993), ‘Black Love’ (1996) and ‘1965’ (er, 1998) albums – The Afghan Whigs might just have been America’s finest rock ‘n’ roll band. The first group from outside the Pacific Northwest to ink a deal with Seattle’s Sub Pop label, the Ohio players shared little common territory with their grunge contemporaries (being influenced more by classic soul, R&B and funk than by the snotty-nosed garage rock of The Wipers, The Replacements and Hüsker Dü) but their brooding, cinematic songs carried with them an air of intrigue, devilment and no little menace. At their black-hearted core stood Greg Dulli, a suave, ruggedly handsome, perennially black-clad frontman with a reputation as both a lover and fighter, gentleman and rogue: an artist with a gift for peeling back layers of guilt, sin and regret even as he peeled back the bed linen for his latest paramour. When the group dissolved amicably in 2001, citing family commitments and overwhelming logistical difficulties, it was hard not to feel we had lost one of the greats.

Such concerns are firmly in the past however, for in 2012 the Whigs reformed for a 65-date reunion tour, followed, by the release, in April 2014, of a seventh studio album, the much-acclaimed Do To The Beast. Remarkably, it would give the band their very first Top 40 album in both the UK and USA. Asked if it might be fair to say then that this reunion has gone better than anticipated, Greg Dulli laughs drily and says “that would be an understatement.”

For the singer, fronting The Afghan Whigs in 2014 feels entirely comfortable again. In the interim years Dulli recorded as a solo artist, with Mark Lanegan as The Gutter Twins and with his own group Twilight Singers, but he’s entirely aware that this band have a special place in the hearts of music fans. Unlike so many of his peers however, the singer insists he was not daunted by the prospect of taking the group back into the studio: in fact, he could not conceive of Afghan Whigs existing in 2014 without a new album under their belts.

“While aware of our legacy, I refuse to be imprisoned by it,” he emphasises. “I’ve never tried to make the same record twice and this one came up to my exacting standards, which is all I can judge anything on. We played really well together on the reunion tour and I wanted to see what a band that played that well together could do in the studio so we just went in and got three songs off the bat. And then we were off to the races.”

At a time when so much rock music is made by whiny little man-boys, Do To The Beast is that most precious of artefacts, a grown-ups’ rock album, and one that fans of, say, Queens of the Stone Age, Gaslight Anthem or The National could readily identify with. Though he’ll refuse to be drawn upon its standing alongside the band’s catalogue, Greg Dulli’s belief in the album is evidenced by the fact that on their most recent UK tour in July, no fewer than eight of its ten tracks were featured in the band’s live set.

“I said at the beginning of that reunion tour I’ll do a ‘hits’ set once, but if I ever play an Afghan Whigs show after this, it’ll be because we have a new album and because we’re playing that album in full,” he explains. “We got offered tons of festivals and shows to continue that reunion tour and I said ‘No.’ For me, personally, as the singer, I had to have a new record that I love, and have that be the focus. Thankfully all my audiences through the years have trusted me, and my sense of what makes a good show.”

This is trust well earned. Part soul revue, part revivalist meeting, Afghan Whigs’ live shows have long been the stuff of legend, with Dulli fond of dropping snatches of Prince, TLC or Temptations songs into the mix. In concert in London in July, the Whigs could be found riffing on ideas from Drake, Pink Floyd and Fleetwood Mac, each blending seamlessly and magically into the night’s musical tapestry. Not too proud to admit that there’s a showbiz element to be considered when assembling a set list (“If you have a song that’ll bring down the house, fucking play it man!”) Dulli is also proud of the fact that no two AW shows are identical, with his gifted band - featuring long-standing bassist John Curley as the group’s only other original member – drawing upon a palate of 35-40 songs nightly. Asked if it’s difficult re-connecting with catalogue tracks filled with echoes of lost lovers and broken dreams, Dulli emits a low chuckle and admits “If I’m singing [Gentlemen-era standard] When We Two Parted, it’s almost like I’m comforting the 27-year-old me.”

“I am that person, but yet I’m not,” he considers. “You’re revisiting something and the circumstances around it, and even though time has passed, I still feel like I can bring authority and emotion to it. It’s not unlike someone doing Shakespeare, those words may be hundreds of years old, but you still have to try to bring pathos to them, to bring them to life anew.”

“I try to go out and meet the folks after every show, and from talking to them, I sense that the connection is still there. I write songs for myself, but once you release it and share it, there’s a beauty to that communal sharing. I defy you to name any artist – except maybe Ritchie Blackmore, who’s a prick – who doesn’t want to hear how they’ve touched someone’s life or how their music or concerts made them smile or laugh or cry or fall in love or helped their problems. It’s fascinating, fabulous. That’s the timelessness of music.”

Time, of course, stops for no man, and for all that the Afghan Whigs music is timeless, their main songwriter is inexorably nudging towards his 50th birthday, which he’ll celebrate on May 11 this year. A man who’s lived a full life, having taken some punches but dished out some too, Ohio’s own man in black insists he’s ready to embrace this landmark with gusto.

“I’m looking forward to it,” he laughs, “and then to turning 51, 52, 53…etc,. You either have another birthday or you don’t – one day the lights will go out and there’ll be no more birthdays – so as long as I’m having birthdays I don’t care what number it is. As long as my quality of life is as good as it is now, which is off the fucking charts, I’m here for the long haul.”

The Afghan Whigs are on tour now.