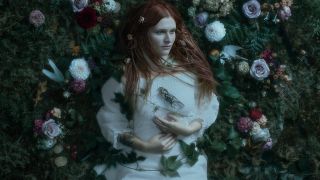 "I spent 10 years of my life dressing up as a Slavic warrior every summer, running around forests, fighting with swords and learning archery,” says Mariana Semkina, reminiscing about her youth, when her parents would pack her off to historical camp every year. “They did a lot of really interesting educational things. I was very bad at most of them, except for fighting and shooting and archery.”

Semkina is nothing if not a history nut. Prog meets her in the opulent lobby of London’s Landmark Hotel, a bread roll’s toss from groups of well-heeled guests enjoying sumptuous dinners beneath a towering atrium, and Semkina immediately tells us the history of the building. How it was originally proposed by the visionary Victorian railway entrepreneur Sir Edward Watkin. How the building fell into disrepair and was used as a convalescent home during the Second World War. How it was purchased by a Japanese company in the 80s and returned to its original use. How it changed hands again the following decade.

She talks more about Watkin: how he established what eventually became the Metropolitan Line on London’s Underground system. How he was behind a doomed first attempt to dig a rail tunnel under the English Channel to connect the English and French railway network (2,000 metres were bored out of the earth before the project was abandoned in the interests of national security). How he started a tower at Wembley to rival the Eiffel Tower in Paris, but it was never completed and the skeleton torn down in 1907, paving the way for Wembley Stadium.

Semkina learnt about Watkin and about The Landmark while researching for Iamthemorning’s last album. It’s what she calls her ‘Victorian Studies’. “I was completely obsessed while we were working on The Bell,” she says. “I was this girl from a Communist country coming over to England and telling English people about their own history.”

So you might expect her to be just as well-prepared when talking about her debut solo album, Sleepwalking. But she isn’t.

“I have nothing interesting to say about the solo album,” she says, only half-joking. “It’s not something I can talk about for hours, like I could with The Bell. This is just an album written by someone who’s very depressed.”

If there’s a direct connection to The Bell, it’s the bleakness of the material. “To be honest, I don’t think I can ever step away from the dark subject matter,” says Semkina. “If I ever start writing songs about unicorns and cupcakes, that means something’s very wrong with me. It’ll be time to send me off to the asylum.”

So no unicorns, and no cupcakes. Instead you’ll find misery, and heartache, and despair, and mental anguish, and (of course) death. ‘It’s okay to be afraid when the whole world’s on fire,’ she sings on Turn Back Time. On Dark Matter it’s: ‘In time, with peace, I will find release/The soil will cover me with moss and flowers.’ And on Everything Burns, she sings: ‘The suffering is sealed in my bones/And I thought it’ll go away if I burn/So I set myself on fire.’ Lyrically speaking, Sleepwalking is absolutely desolate.

This is perhaps inevitable for a woman who, as a six-year-old, told her mother she wanted to study coffin-making at university when she grew up. “To sleep in,” she clarifies.

Sleepwalking may be dark, but, like The Bell, the sorrow and the torment is tempered by exquisite delivery. It’s an album of sweeping beauty, rendered in deft turns and surprisingly uplifting arrangements. Even at its gloomiest – Ars Longa Vita Brevis is formed of ominous strings and haunting acoustic guitar, while Invisible has a desolate, almost industrial feel – the prettiness of Semkina’s voice gives the songs a celestial sheen. It’s also an album where there’s plenty of devilment in the detail. People who buy the Collector’s Bundle version of the album receive – among more regular artefacts – a message in a bottle, a butterfly encased in an acrylic crystal, an origami bird made from the score of the album’s string arrangements, and a postcard inscribed with “a personal Shakespearean curse, just for you”. Meanwhile, the LP artwork features the singer reposed on a bed of fresh and wilting flowers, eyes open, the corpse of a small bird by her side. On the CD, her eyes are closed.

She explains: “The album asked to be made. I had so much material I felt I was wasting. For many years I was very insecure about releasing stuff under my own name, and if I did something it was anonymously thrown onto the interwebs. I never thought of myself much, so releasing a solo album felt a little bit too self-absorbed.

“Talking about it also feels self-absorbed. Maybe that’s why I don’t like interviews about it, because it’s like talking about yourself for hours. I really don’t like this at all.

“I’ve been told for many years that I’m not good enough, and that’s imprinted on me,” she continues. “I work with classically trained musicians, and of course they’re going to be condescending. Gleb [Kolyadin, Semkina’s partner in Iamthemorning] is great, but he can say some really tough stuff sometimes. Crippling self-doubt is something I’ve always carried with me, so I decided to get out of my comfort zone and start fighting this shit. So I did. And I’m not liking it so far.”

“I decided that this project would only involve people that I like,” says Semkina. “Something that would be filled with mutual respect. I needed for the environment to be non-toxic. The whole idea was for the album to be sort of a therapy.”

“I think you should ask me again in six months, when the album is out, and I don’t hate it entirely.”

Again, she’s half-joking. Drill down a little and it’s pretty clear Semkina’s proud of the album’s component parts, even if the overall result has yet to be fully digested. When we talk about Everything Burns, one of the album’s highlights – and a truly atmospheric piece of music, reminiscent of Portishead at their spookiest – she actually admits to liking it, talking excitedly about the contribution to the track made by drummer Svetlana Shumkova, and about the video that accompanies the song.

“I found a wonderful actress from Theatre Masterskaya in St Petersburg, and she made this whole video very special to me. Looking at her on the set was a very special feeling. She was there to display exactly the sort of feelings I was thinking of when coming up with the video idea: the feeling of being trapped and needing a fresh start.”

She wants to play the album live, but there are obstacles: “I really want to, but first I have no idea how, second I have no idea who with, and third I don’t know when I’ll be able to get to it because my schedule is just insane. My original plan was to make an album that I’d be able to tour with, but I ended up using a chamber orchestra and all sorts of different instruments. So replicating it on stage with less than we had during the recording would be sort of underwhelming. I don’t think it would sound as good. But I have to try.”

Suddenly Semkina hesitates, then asks what Prog thinks of the album. And she seems surprised that we like it.

“I’m a little bit wary of this whole thing,” she says. “I use every opportunity to tell people that it’s not going to be a prog album. I’m not sure what it is. Dreampop? Sadcore? Deathpop? I think people will be disappointed.

“Although if people like Iamthemorning for specific reasons, then they might enjoy this album,” she adds, brightening up to the business of selling the thing. “If they like my voice they’ll probably like the album.”

And on that note, she’s probably got nothing to worry about. Semkina was recently voted female vocalist of the year by Prog readers, and that, at least, is grounds for enthusiasm. “It’s motivation to work even harder in 2020 to live up to the title I’ve been accidentally given,” she says. “And I’m definitely intending to do so.

“I knew that I could do two things in my life: speak English and sing,” she adds. "So I never actually faced a choice in what I wanted to do. I was just gradually led to where I am now.”

And where is she now? Well, she’s given herself a new/old name, swapping the familiar Marjana for the name she was actually born with: Mariana.

“That’s my original name in official documents, so it’s like returning to my roots,” she says. “I didn’t like it when I got Facebook, so I spelled it with ‘j’ as an act of rebellion. And then it just stuck with me. Now that I get a fresh start with the solo project I thought it would be appropriate to draw a symbolical line between my solo project and the band this way. Besides, I really love how it reminds me of Tennyson and works of the Pre-Raphaelites – Mariana was his poem, and they made a lot of beautiful paintings based on it.”

She’s also finally left St Petersburg for the UK, that Exceptional Talent visa in her passport and an exceptional solo album under her belt, one that she’ll surely learn to love. She’s been a Prog magazine cover star – she and Kolyadin appeared on a bespoke edition of issue 101 (“I had to send it to my parents, to let them think that I’m actually successful”). And she is looking for a place to live.

“I don’t study and I don’t go to the office,” says Semkina. “I just need a quiet place to write. I used to go back to Russia to seclude myself for writing because I have this empty apartment with a huge window overlooking the forest. It’s a tiny box, but it’s enough.

“So I want to find a tiny box here, with a big window to look out of, like a prisoner, hopefully overlooking the sea, writing sad songs forever.”