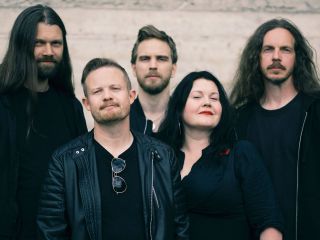 Appropriately for a band who have a habit of taking deep, personal root in anyone who a) comes across them, and b) has a pulse, Norway’s Madder Mortem have spread out far and wide across rich musical and and emotional terrain in the 20 years since the release of their debut album, Mercury.

Originally released on, Misanthropy Records, the seminal British label that fostered Burzum, Mayhem and Primordial. as well as far-flung, progressive mutations such as the recently reformed In The Woods… and Ved Buens Ende, Mercury took metal’s DNA and wove it into a raft of organic new forms that could accommodate the rich, soul-seasoned vocals of frontwoman Agnete M Kirkevaag.

Impossible to categorise from the off, laying out its own, intuitive path in realms between the kind of heart-heavy yet rejuvenating doom you’d find in early The Gathering, barbed metal riffage and inquisitive, progressive wanders, Madder Mortem’s debut album created an immersive world that felt like an unfurling, psychological map.

For those who have followed the band in across the six, mesmerising albums they’ve released since, and for newcomers prepared to have their heart sensitively disassembled and reformed, we have an exclusive preview of Mercury’s reissue in the form of a video for the the gorgeously devastating track, Vigil. Taken from a documentary currently in the works, the video is as as intimate and reflective as the song itself, combining current rehearsal footage with scenes from the band’s early days, and all set amidst the splendour of a wintry, Nordic landscape.

“When I first began filming the project,” says director Randy M. Salo, ‘the band were in the rehearsal room putting the last touches on the bonus tracks for the Mercury re-release. When they began to play Vigil, I immediately saw the music video playing out in my mind. Experiencing the 20 years of history between the first album and that moment, I saw a mini-version of the documentary that would combine images of the hauntingly beautiful landscape of Hedmark county in winter, with the band rehearsing and recording the bonus tracks. To give the fans a more intimate look at their journey we included many archival photos from their storied career. I hope this video will help tide over the fans until the release of the feature length film!”

Graduating from a delicate whisper through post-rock textures to the kind of empathetic reckoning that will have grown people in tears towards the end, it’s a testament to resilience and an act of guidance through difficult times that’s grown ever more resonant in our anxious age.

“Vigil is quite a special song, says frontwoman Agnete. “As one of the bonus tracks for our Mercury re-release, the main riff was written in the early 90s by Christian Ruud, our then guitar player. We were never able to forget this idea, so when we started thinking of bonus tracks for this re-release, that riff was immediately on our minds. Madder Mortem anno 2019 worked on it and added to it in the rehearsal room, and the result is a fragile and beautiful landscape of music that we are very proud of. The lyrics are very direct and honest, and balance right on that razor’s edge between despair and hope that is a Madder Mortem trademark.”

So without further ado, take a deep breath and prepare yourself for the transformative wonder that is Vigil below!

And pre-order the 20th Anniversary edition of Mercury here!