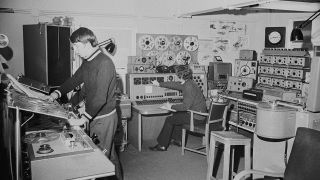 Progressive rock has had a long and loving relationship with the synthesiser. From the primitive stirrings of proto-prog right through to the present day, electronic instruments have provided prog-minded musos with access to surreal and startling sonic spheres. In the brave new world of the 21st century, where amazing music technology is as cheap as silicon chips, synths may be regarded by many as mundane and functional items, but it wasn’t always so. During the 1960s and 70s, as prog rose to prominence, synthesisers were expensive and exotic exhibition pieces reserved for a privileged elite.

Electronic music, and the once-futuristic machines used to create it, has, of course, a much longer history than that of progressive rock. The first electronic devices capable of producing what might pass for music were made during the Victorian era, although it would be from the 1920s onward that they developed apace. The invention of magnetic audio tape in the 1940s represented another sea change, allowing electronic sound to not only be recorded, but also manipulated in many different ways.

Probably the best-known early electronic instrument and the first to be mass produced was the Theremin, originally developed during the 1920s and still in production today. Until the wider availability of commercial synthesisers, however, electronic music remained confined to laboratory-cum-studios operated by genre pioneers such as Karlheinz Stockhausen, Gottfried Michael Koenig, Pierre Schaeffer, Pierre Boulez, Jean-Jacques Perrey, Luciano Berio and John Cage, just some of the aforementioned elite.

Perhaps the first piece of electronic music to reach millions was the 1963 theme for the popular TV series Doctor Who. Created by the BBC Radiophonic Workshop (established in 1958), its strange, stark and sinister sound remains as evocative as ever. It was, however, still some way off being pop, but pioneering producer Joe Meek’s 1960 outing I Hear A New World was already pointing the way for the development of electronic prog.

The emergence of synthesisers into a commercial (though still relatively exclusive) market coincided with the use of the recording studio itself as an instrument. The Beatles’ 1967 album Sgt. Pepper’s Lonely Hearts Club Band is but one example from the period, and Pink Floyd’s gradual introduction of synthesisers over the course of several albums during the late 60s and early 70s charts an important evolution.

Away from the counterculture scene, albums such as Wendy Carlos’ 1968 effort Switched-On Bach coincidentally created a fad for electronic music among a suburban set more generally into classical and jazz – both of which, oddly enough, fed into progressive rock itself.

Subsequently, Yes, Genesis and, famously, ELP became just three giants of prog rock’s golden era, with synths a key part of their sound. Mortgaging your future for the sake of a Moog practically became de rigueur as artists reached for the ‘new’ in what was then still seen as the future.

Although extended instrumental sections were a hallmark of prog rock in general, Europe, as opposed to the UK or the US, produced numerous outfits whose oeuvre was open-ended exploration and even improvisation from which developed much of the (often purely) electronic music of the first progressive explosion. Tangerine Dream, godfathers of the Berlin School of electronic music, are the classic example, from whom emerged Klaus Schulze, whose solo work is surely just as influential.

Can, Faust, Cluster and the so-called Krautrock bands had their own role to play, often bridging the gap between electronic prog and more ‘conventional’ prog rock or psychedelia. Meanwhile, fellow Germans Kraftwerk traced their own trajectory, from edgy experimentation to the sleek synth pop that inspired thousands, even as the 1980s pulled the rug from beneath prog’s sparkly-booted feet.

The pinnacle of electronic prog is perhaps best reflected in the vast commercial success of Jean-Michel Jarre and Vangelis, one with roots in intellectually inspired studio abstraction, the other steeped in the glories of prog rock at its purest. That we may never see such dizzying heights scaled again has much more to do with the changing nature of the music industry than it does with the music itself.

Fans of vintage electronic music might show little or no interest in classic progressive rock and vice versa, but they’re intertwined branches on the same gnarly old tree, their long-form, free-flowing compositions leaning away from the compact, contrived character of typical rock or pop songs.

And should we ever struggle to categorise and contain these things? Then good. The dawn of the synthesiser turned music on its head, promising a radical, revolutionary and, perhaps most importantly, unknown future. At its best, electronic prog takes us there.