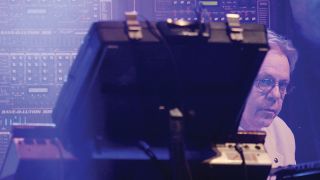 Klaus Schulze is an electronic music icon. Born in 1947, the German composer has produced some of the most influential work in the genre – if indeed the term ‘genre’ could ever really be applied to the hydra-headed beast that sprang forth from the birth of the synthesiser. When Schulze started out in the 60s, however, electronic music was a decidedly niche affair. Although many rock and pop bands showed interest in the nascent technology, those solely exploring synthesisers as a way of creating music were few and far between.

Originally a drummer, Schulze emerged onto the scene first as a member of Tangerine Dream and Ash Ra Tempel, and then via a series of stark, minimalist solo albums, which subsequently gave way to lush mid- to late-70s outings such as Timewind (1975), Moondawn (1976) and Mirage (1977) – landmark releases of the so-called ‘Berlin School’, which spawned a thousand imitators.

Like many musical pioneers, his career has veered between boundary-pushing and retrenchment, though his mindset and overall approach are nothing if not progressive, and much of his best-loved and most highly rated work stems from the period when prog rock was at its peak.

Occasional collaborations aside, Schulze has always come across as fiercely individual, weaving his own wondrous sonic worlds, virtually oblivious to whatever was happening on this one. His contribution to the creative explosion of the 60s and 70s may be colossal, but it’s no surprise to find him ambivalent and even dismissive of categories, classification and almost all manner of musicological musings.

“‘Progressive’ is a logo for some music fans and journalists – they seem to like it, or maybe they need these terms for some reason,” says Schulze. “But must I follow, know and use them too? To say something heretical: yes, of course, a nearly 50-year-old piece of music that I maybe loved as a teenager can be still ‘progressive’ today. But when I listen in 2016 to an old King Crimson album that was way back in 1969 the peak of ‘progressive’ to the teens, and if I remember well, it was indeed a beautiful and loved pop album then. But today I just hear pretentiousness, even kitsch. Wagner or Mahler were and are more ‘progressive’ and influential.

“I understand that you are fascinated by the term ‘prog’ – after all, this interview is made for a magazine with this title – but please understand that I am a musician, an artist, and that my ideas, views, beliefs are different. I look at these words but they mean not so much to me as for others. Remember ‘fusion’ once? Or ‘jazz rock’? And in 1990 it was for some parts of electronic music ‘acid’, ‘acid jazz’, ‘house’, ‘deep house’, ‘Detroit techno’, ‘rare groove’, ‘New York garage’, ‘industrial’, ‘Latin hip hop’ et cetera. All these fashionable coming-ups of words are not the terms and definitions I think or care much about. I am neither a swish sociologist nor a smart journalist but just a dull little musician who’s doing and enjoying his very own doings, and I call it ‘music’.”

As with purely electronic music, prog itself branched out wildly, like so much bracken, and continues to colonize ever more cracks and crevices in a contemporary purple patch that shows no signs of fading. Schulze, of course, hears therein only the rhythm of the ages, the cycle of birth, death and rebirth that traces the trajectory of modern music.

“I don’t watch fans, older or younger, and check about their interest. All these many years I was doing what I wanted to do and didn’t care much about what others would say about it. Of course I liked it when they respected and understood my music. But if I would have cared about taste and interest and made music that the public is ‘interested in’, then I would have made a much different music. I would be a different person. But if I think about it a second time, it reminds me of some jazz. The old jazz of the 20s also had a renaissance with a new generation, once: Dixieland music and Dixieland fans.”

Schulze retired from the stage in 2013. It remains to be seen whether he has retired from making music altogether. Looking back on his career, he’s as reluctant to stamp, file and rank any of it as he is to do so to the work of others. He’s nothing if not consistent, leaving it to the rest of us to marvel at the moments of magic that mark him out as a visionary.

“Retirement was not difficult,” he says. “There comes a time in life the body claims for a rest and I have to follow his demands. I am here in my house in the middle of a forest with my wife and my music and some memories. My internet connection is down and I don’t miss it. Most of my albums are still available, and people can listen to them and enjoy.

“So many things happened during the years: making music every day, producing and releasing albums, giving concerts all over Europe, erecting labels and – rarely but sometimes – producing other musicians, giving plenty of interviews and explaining, ‘What is a synthesiser?’

“I cannot cite high and low points. If I would remember one event that comes to my mind, I would neglect all the others that slipped my mind today but would be tomorrow highly remembered. Maybe. I take my musical life, which is my life, as a whole. It all belongs together, the positive as well as the negative things. Some like to ask the final question, ‘What is your best album?’ or, ‘Which one don’t you like any more?’ My answer is always that they could also ask about my relation to women during my life and I would tell the same: I love(d) the first, the last, and all between.”