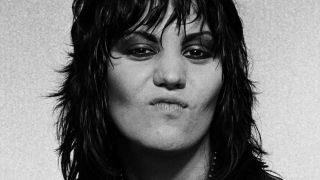 Those with more rock’n’roll in their soul than Joan Jett are few and far between. As the key founding member and creative driving force behind The Runaways and latterly as the instantly recognisable leather-clad leader of the gang in Joan Jett & The Blackhearts, the artist formerly known as Joan Marie Larkin (Jett being her mother’s ludicrously appropriate maiden name) recalibrated the template for women in rock.

If there was such a thing as a poster girl for riot grrrl, Jett was it: self-determined, tough, uncompromising, her proudly flaunted ‘bad reputation’ was surely something to aspire to. In the beginning was the word. And the word was ‘Quatro’. Suzi Q had a seismic effect on Joan J. Suzi’s style, attitude and casual appropriation of classic rock’n’roll into an entirely contemporary setting was a concept worth repeating: if Quatro could leather up Elvis and Eddie for a glam audience Joan could certainly ratchet up similar ingredients for the punk era.

Jett acquired a guitar at 14, moved to California, hung out at Rodney Bingenheimer’s English Disco and waited to be discovered. It didn’t take long. At least, that’s the fiction. Patriarchal rock myth tells us that LA producer/scenester/kingmaker Kim Fowley puppet-ed The Runaways into being. Not so. Both Jett and drummer Sandy West had approached Fowley and, recognising like-minded souls, he’d hooked them up.

Fowley did manage and produce the band (completed by vocalist Cherie Currie, bassist Jackie Fox and guitarist Lita Ford), but Jett was her own Svengali. The Runaways were pioneers that got scalped. Young women (they were all 16 and 17) simply didn’t form hard rock bands back in the mid-70s and it was tough.

They conquered Japan, made in-roads elsewhere, but Currie and Fox bailed, and the band split after three massively influential studio albums. Post-split, Jett hooked up with ex-Shondell Kenny Laguna.

Upon finessing the Joan Jett blueprint on what was to become her Bad Reputation solo debut’s title track and a cover of The Arrows’ I Love Rock ‘n’ Roll, Jett and Laguna unsuccessfully hawked demos to 23 labels before setting up Blackheart Records, recruiting the Blackhearts, conquering MTV, feminising rock and, in 2015, being inducted into the Rock And Roll Hall Of Fame. Proof positive of a life-long love requited.

Capturing a band at the peak of their powers while teetering on the brink of collapse, Queens of Noise stands as The Runaways’ defining statement. An increasingly fraught relationship with manager/producer Fowley saw Earle Mankey installed behind the board. Markey brought sonic muscle, Lita Ford brought metal chops and Jett and Currie’s power struggle did the rest.

As the former secured the prized lead vocal on the titanic title track and combined Alice Cooper drama with Shangri-La’s sass on glorious set-piece Born To Be Bad, the latter countered with proto-hair ballads Midnight Music and Heartbeat. Who won? We all did.View Deal

Jett originally recorded The Arrows’ I Love Rock ‘n’ Roll with ex-Pistols Paul Cook and Steve Jones in ‘79. It crept out as a B-side and disappeared, but when revived with the newly recruited Blackhearts as the first single (and centrepiece) of her second solo album, it exploded.

A US Number One for seven weeks, it was an instant classic. Its accompanying album matched perfectly pitched covers (The Halos’ Nag, Tommy James And The Shondells’ Crimson And Clover) with self-penned scorchers (Love Is Pain, and a reclamation of The Runaways’ You’re Too Possessive), defining Jett’s oeuvreView Deal

Contrary to popular belief, Joan Jett was always as much The Runaways’ lead vocalist as Cherie Currie, and the band’s principal songwriter. Currie may have fronted Cherry Bomb, the closest they came to a hit – in an eye-catching bleach ‘n’ basque combo – but it was Jett that wrote it. As a debut’s opener, it’s a cracker.

Recorded on the hoof on borrowed studio credits by producer Kenny Laguna following the break-up of The Runaways with whoever was handy (The Roll-ups, ex-Pistols, Blondie’s Clem Burke and Frank Infante), Bad Reputation started out self-financed, eponymous and sold from the boot of Laguna’s car.

It became the template for all that followed. Sneer-lipped, self-assured, assertive originals and Jett-propelled covers of half-forgotten jukebox greats (not least Lesley Gore’s You Don’t Own Me given extra heft in the bollocks department by Cook and Jones) combined to enduring effect.View Deal

The Jett/Laguna songwriting team, occasionally bolstered by Blackhearts’ guitarist Ricky Byrd, were firing on all cylinders and bringing a degree of pop sophistication to the ballsy glammed-up trad rock that lay at the core of the Jett’s MO.

They initially planned to perform a benefit show to continue funding the investigation into the killing, but with Laguna producing the quartet made an album of, primarily, Gits songs.

Grunge/ Grrrl icon Jett is clearly in her element, her inner punk entirely off the leash (she fell in love with the scene on the Runaways ‘77 UK tour) she assaults the material with electrifying, visceral rage. A glimpse of what might have been.View Deal

Jett had emerged victorious from the reshuffle; of Waitin’ For The Night’s 10 songs she had written eight to lead guitarist Lita Ford’s two. Consequently, Jett toughness was predominant, leaving the LP too punky for the US mainstream, and not punky enough for the UK underground.

And Ford’s roughhouse pyro-metal? Too early for the NWOBHM. Whatever, time’s been kind, and Little Sister, Wasted and School Days all sound better now than ever.View Deal

Joan Jett & The Blackhearts - Up Your Alley (Blackheart/Polydor, 1988)

It’s been a while since you’ve had a hit, you have a tidy budget, Desmond Child’s co-written your first track/lead single – I Hate Myself For Loving You – and he’s sitting in the producer’s chair next to team player Kenny Laguna. Former Rolling Stone Mick Taylor is on hand with a guitar solo and it’s 1988.

What do you do? If you’re Joan Jett, you insist that all concerned apply themselves to making a record that sounds like Gary Glitter circa 1974. Bang! US Number 8. And that’s why Joan Jett’s a genius. Elsewhere, 80s opulence gets a bit much, but that opener? Gold.View Deal

Kicking off with a re-recorded Cherry Bomb, Glorious Results (Jett’s fourth solo LP) isn’t afraid to squeeze every drop of the bleeding obvious from the Blackhearts’ ongoing mission.

A formidable production crew (including Chris Kimsey and Jimmy Iovine) more than meet requirements and Glorious Results would be higher rated if the same rabbit hadn’t been pulled from the same hat before, but then, this was quite the rabbit.

Hold Me is probably Jett’s best original ballad to date and a swashbuckling assault on The Belmonts’ I Need Someone is worth the price of admission alone.View Deal