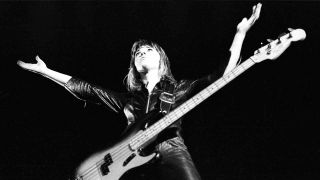 My lady of choice has to be Mrs Q. I can remember hearing her on the car radio for the first time, and asking my parents who that man was. It doesn’t matter that she isn’t the greatest singer. She has balls, and stature, and one of the most powerful lead voices ever! She’s a huge influence on my own singing.

As a young girl, I could really look up to and relate to Suzi, as she wasn’t oozing feminine sexuality to sell records. It was her no-nonsense attitude and gusto that really shone through. When The Amorettes released our very first album, Haulin Ass, we managed to get a copy to Suzi, who emailed us to say how much she enjoyed it!

She really is the First Lady of Rock. Here’s a list of my favourite tracks and the reasons why:

Is there a more impressive debut hit single than this? With massive drums and such a strong vocal impact, you don’t even notice that there’s no real guitar riff. I love how the track grows to a frenzy at the end, even if I have no idea what she is singing about.

To carry on, is there a more impressive follow-up to a debut hit single than this? What’s amazing about this is that whilst bands like The Sweet and T-Rex had to go through their Little Willy and Ride a White Swan phases, Suzi hit the ground running, nailing her colours to the mast as a bonafide rock’n’roller. Is this song just about a giant cymbal? Who knows?

If You Can’t Give Me Love

Another side of Suzi’s musicianship, and a song with a great message. She always sings about women in a positive and empowering way. This Carpenters-esque song shows such great diversity in style, and is impossible not to sing along to.

What a great cover! I love the teasing theme of this! I find I use a lot of this in my own writing. I remember seeing Suzi play in Sweden a few years back, and she had the whole place screaming this back at her, it was absolutely electric!

She’s In Love With You

As a song that came along a few years after Suzi’s first chart success, this song really highlights how well she was able to adapt to an ever-changing musical climate. This song wouldn’t sound out of place on a Blondie record, and is yet another one of Suzi’s songs with a great message.

It’s easy to forget that not only does Suzi have an incredible voice, but she is also a fantastic bass player. This is really showcased here. It’s a straight up, no messing, Pistols-esque gem.

Whilst it may seem like the obvious choice to include, no top ten would ever be complete without Devil Gate Drive, and for good reason. In the session for our third album, White Hot Heat, producer Luke Morley suggested we try a Suzi cover, and for us this was everyone’s first choice. Another Chinnichap masterpiece.

This is a masterclass in how to create a great song with only two chords. The mixture of theatrical panting and screaming — and the electric piano — makes it sound like The Doors on heat.

Another hard hitter right from the word go. The vocals tear through the speakers like razor blades. I love how she can deliver such an aggressive sounding song yet still with such a catchy singalong chorus.

I May Be Too Young

There is a great story to this song, one that seems to be (for whatever reason) often forgotten about. It’s refreshing to hear about a young and carefree attitude from a girl’s point of view. Songs of hers, like this one, really paved the way for bands like The Runaways to take it further.

The new album by The Amorettes, Born To Break, was produced by Thunder’s Luke Morley and is released on April 6. It’s available to pre-order now. The band are on tour in April.

Suzi Quatro: I haven’t seen many people walk my path, even after all these years