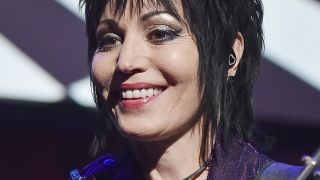 Joan Jett says she wants to see more women in the Rock And Roll Hall Of Fame.

The former Runaways guitarist will be inducted at this year’s ceremony in Cleveland on April 18 but has called upon organisers to do more to highlight the contribution of female musicians.

She tells Billboard: “There should be more women in the Hall Of Fame, and more women in rock. They’re out there, they just don’t get the notice the pop girls do.

“Go to any city and there’s an all-girl rock band – it’s just a matter of society wanting to hear that kind of music. But people’s tastes change, so you have to do what you love and hope other people love it too.”

A 2011 report showed that only 10% of Rock And Roll Hall Of Fame members were women. Jett is the only woman to make the shortlist this year.

She’ll support The Who on their upcoming run of live shows across North America, starting in Florida on April 15.