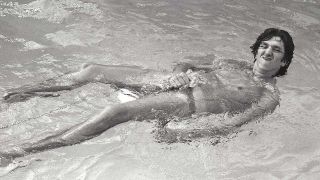 The point is this: Never Mind the Bollocks is one of a tiny handful of truly revolutionary rock’n’roll records that not only changed the way people looked and sounded and felt forever, but also sounds as raw and vital now as it did the day it was released.

Below, the nan whose guitar powered the anarchy picks the 10 Records That Changed His Life.

It’s hard to say which one. Phil Manzanera is a good guitar player and did some good stuff. He does some good soloing, but on In Every Dream Home a Heartache, on the second album, it’s kind of like a slow, eerie song, but near the end it goes into this whole big psychedelic lead solo - kind of like Hendrix. That’s a fantastic piece of guitaring. He was an interesting guitar player. I think he was more like a hippie, that joined a band that wasn’t hippies - especially in a fashion sense, I don’t think he really want to wear all the stuff that Bryan Ferry and Brian Eno were wearing. But his guitar playing worked with Roxy Music - it wouldn’t have been the same if they’d have got some weird guitar player in.

As far as guitar goes, I loved the Faces’ A Nod Is as Good as a Wink… to a Blind Horse, with Ronnie Wood. I loved his sound when he was in the Faces. He had a certain sound - I think he used an Ampeg set-up with a Zemaitis guitar. I was just a massive fan of that band, and they were great live. It was a nice, full sound that he had.

I learned to play guitar to that album. That was a big one for me. James Williamson is such a beautiful guitar player, man. Really unique riffs that he had. Way different than Ron Asheton. Ron Asheton, technically, is not the best guitar player - but fantastic, still great. I’m not taking nothing away from him - his riffs, his soloing, and his spirit and what he did play is really good. But James Williamson is a way technically better guitar player. He was doing a lot of stuff, but it didn’t take away the drive. It still had a big drive in it. He’s an underrated guitar player, for sure.

The first New York Dolls album was another one where I learned to play guitar. I used to take speed and play for hours to them records. I didn’t know what I was doing, but them two albums - Raw Power and the first Dolls album - they were the two that kind of helped me play guitar.

I love the first Queen album. Talking about guitar albums, the first Queen album was very important. It was just so well produced and great, great songs. I couldn’t stop playing that album when I first got it. And I liked the fact that on the album, it said “There were no synthesizers used on this record.” For some reason, that stuck out in my head.