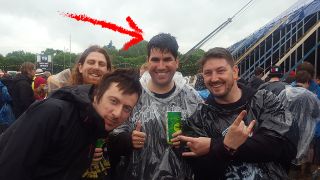 You might think politicians are stuffy old men with trousers up to their nipples and zero connection to the real world. Of course, that might be true for some of the old guard, but the Shadow Justice Secretary and East Leeds MP Richard Burgon is a devout metalhead who has been a part of the scene in his hometown since the late 1990s. Sure, he might have to wear a suit to work nowadays, but that doesn’t stop him donning a Maiden shirt and heading to dirty, dingy gigs on his evenings off. Is this man the most metal politician in the UK? If not, the world?!

How and when did you discover heavy metal?

“Believe it or not I was eight years old, on holiday in Malta, and there was a lad staying in the same hotel as me, and he was listening to something on his headphones. I asked him what he was listening to, he put one of the headphones in my ear and it was Iron Maiden and I thought it was amazing. That week I bought a bootleg Iron Maiden tape while on holiday in Malta and I’ve never looked back. That’s probably why Iron Maiden are my favourite band because I got into them first.”

What was the when moment you truly connected with metal?

“The first Iron Maiden CD I bought was Live After Death and when I heard that I thought it was amazing. The energy, the interplay between the band and audience, and looking through the booklet at the stageshow with the pyramids and Eddie, just made me realise it was such an exciting genre you can really get your teeth into.”

What was the last gig you went to?

“I went to see Sleep at Kentish Town Forum. I’ve seen Sleep at Hellfest before, I’m a big fan of that doomy genre, and I thought it was fantastic. It’s very rare that Sleep play, so it was great to see them live. I went straight to the Sleep gig from Parliament, which was two different worlds. I got changed and went straight to the Sleep gig, and what was nice was that I mentioned to [Labour leader] Jeremy Corbyn that I was going to a gig that night, and he sent me a text during the gig saying ‘Enjoy the gig, you deserve it’.”

Live music in the UK feels under threat with venues closing all over the country, including the Cockpit in Leeds near you.

“I used to go there every Saturday night in the late ‘90s to early ‘00s. The DJ there, DJ Electric I think he was called, lives near my house now actually. It’s a shame that the Cockpit closed and it’s a shame that so many music venues are closing. I think one of the really unfortunate things about the live music scene is that where bands used to get paid to play on Friday nights to bring people into the pub or club for drinks, it’s almost a case now that bands have to pay to play themselves. They have to pay the venue for the joy of playing or they don’t get paid at all, and I don’t think that’s helpful for the sustainability of the live music scene.”

Is there anything you and/or Labour can do to rejuvenate the live music scene?

“I have to say, that apart from going to gigs and supporting live music, it’s not a policy I thought much about. I used to put on gigs myself at the Brudenell Social Club in Leeds, which was a great venue. I’m not sure if there’s a way of doing this and it’s not my area of policy, but I’d like to see more pubs and clubs paying bands on a Friday or Saturday night. It brings more money into the coffers of the venue, doesn’t it. There are people coming into the venue that wouldn’t be there otherwise, in order to see the live music. But we’ve got to a stage that bands are paying for the privilege of playing.”

Have you ever been in a band?

“For a few months, maybe two years ago, I was playing guitar in a doom band. It sounded a bit like Electric Wizard but not as good. But the nearer it got to the general election, I had so much to do I couldn’t commit to rehearsing as often which is a shame.”

There’s a bastardised quote that says “politics is rock ‘n’ roll for ugly people”, how do you feel about that?

“On a serious note, I don’t think MPs should try and be celebrities. There are too many instances where MPs act like celebrities, and they shouldn’t want to be celebrities. I don’t see politics as anything like show business, I just see being an MP as a job of representing people and standing up for what you believe in and what’s in the interest of the people you represent. I have no desire to be on a gameshow on TV or anything like that.”

Do you have any ‘celebrity’ friends in bands?

“One of my friends used to play violin for My Dying Bride, and my former housemate is in the black metal band Forest Of Stars. In the past when my mates were in bands I’d drive them around in the van or whatever, which was always good fun. The heavy metal scene is so great because it’s something you need to make an effort to get into, and the people you meet at gigs are so passionate about music. The readers of Metal Hammer know the stereotypes that are thrown around about metal fans are completely false, you’d think we’re all knuckle-dragging cavemen the way we’re sometimes portrayed, but at metal gigs you’ll find some of the most interesting individuals you could meet at any event really.”

“Surely the only error that Labour member made was to prefer the Foo Fighters over a real heavy metal band ha ha. I did tweet about it, actually. I said something like ‘The Foo Fighters aren’t heavy enough, I prefer Motörhead’ but I don’t agree that someone should be banned from voting for that.”

You mentioned you went to Hellfest, do you use festivals as a way to be free from being an MP?

“I very rarely get recognised unless I’m in my suit. People don’t expect to see an MP in a Maiden shirt or a Slayer shirt and jeans, so when you’re not dressed in the ‘uniform’ of your job you can enjoy yourself and get truly immersed in it. Metal is the best form of music for escapism, especially when you look at some of the stageshows at Download festival – it’s like going to the theatre, isn’t it? No matter what issues or struggles people might be facing, metal festivals give you an opportunity for that all-encompassing escapism because fans are so tied to the music and the camaraderie amongst the audience.”

What are you listening to at the moment?

“I’m listening to a lot of Vallenfyre at the moment. Electric Wizard, My Dying Bride, Amon Amarth’s recent album. When people ask me to recommend a band that aren’t necessarily well-known, I always say Woods Of Ypres. I think they’re absolutely fantastic, and I’ve been listening to a lot of them recently. David Gold, the singer that died in the car crash, I think his lyrics are so fantastic. People always talk about Morrissey and his lyrics, but I believe David’s lyrics are at least on a par with Morrissey when it comes to the clever, introspective, deadpan lyrics. I think they’re totally unique, so I really recommend any album by them.”

Could you, or would you want to, become the first heavy metal Prime Minister?

Megadeth: "Go into politics? They'd only bring up the fact that I did heroin"