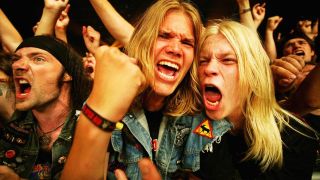 Metalheads grow up to be happier and better adjusted adults than many fans of other genres, a study has suggested.

The research published by Taylor & Francis Online sought to test the validity of studies carried out in the 1980s which claimed fans of ands such as Iron Maiden, Judas Priest and Black Sabbath were at risk of “poor developmental outcomes.”

And, Pacific Standard reports, the new research finds that most of the metalheads who took part in the study “were significantly happier in their youth, and better adjusted currently” compared to peers who were into other music.

The team was led by Humboldt State University psychologist Tasha Howe, who says: “Metal enthusiasts did often experience traumatic and risky ‘sex, drugs, and rock’n’roll’ lives. However, the metalhead identity also served as a protective factor against negative outcomes.

“Despite the challenges of adverse childhood events, and other stressful and risky events in their youth, they reported higher levels of youthful happiness. They were also less likely to have any regrets about things they had done in their youth.”

The study also reports that those who focused on types of music outside of heavy metal “sought psychological counselling for emotional problems more than any other group, indicating a less happy and fulfilling perspective on their 1980s adolescence.”

The research would appear to make a mockery of high-profile 1980s campaigns against the metal lifestyle, run by organisations such as Tipper Gore’s Parents Music Resource Centre. Metal in the 80s was often frivolously linked to devil worship, drug abuse and suicide.

Spotify recently named metal fans as the most loyal of all listeners.

Twisted Sister Versus The PMRC