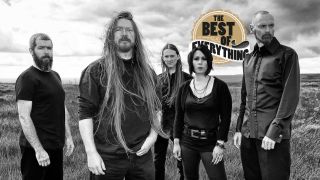 “When I was trying to compile this list I was going through all my tunes, and at the end of the evening I just felt absolutely crushed!” laughs Lene Abé, bassist with My Dying Bride since 2007.

As Yorkshire’s much-loved doyens of death-doom are gearing up to release an album entitled Feel The Misery in September, we ruined her day by challenging her to put together 11 of the most devastating musical tear-jerkers.

“All of these songs have personal meaning, they really mean a lot to me,” she explains. So, try this lot for sighs…

NINE INCH NAILS – Hurt (The Downward Spiral, 1994) Lena Abé: “Looking at the back catalogue of Nine Inch Nails, this is the emotional peak. It’s sung really softly but it’s really raw and the lyrics are absolutely perfect. It’s just a very personal song for me, and I’m sure for many, many people; it always catches me off-guard every time I hear it, because it is such an outstanding song. I’m not so much a fan of the Johnny Cash version, it’s the original for me every single time.”

VIRGIN BLACK – And I Am Suffering (Requiem: Mezzo Forte, 2007) “I don’t understand why Virgin Black are not more popular. Our guitarist Andrew [Craighan] introduced me to them, he said they’re more My Dying Bride than we are! It’s one of those contradictory songs, it’s beautiful but sad at the same time, it’s not traditionally dark like a lot of doom bands, it’s more about the contrast of beauty and sadness. The guitars are thick and moody, the riffs are crushing, and it moves like a really emotional film score.”

EINSTÜRZENDE NEUBAUTEN – Sabrina (Silence Is Sexy, 2000) “This is important to me not just musically but the video as well, I can’t really listen to the song without watching the video, it makes sense altogether. It’s a very tragic song of identity, of what you are versus what you want to be. The whole atmosphere’s really dark and brooding and it’s made all the more creepy by the video. It’s very downbeat and simplistic too, it’s something you can really get lost in. I love that band, absolutely genius.”

TYPE O NEGATIVE – Red Water (Christmas Mourning) (October Rust, 1996) “It’s the whole album really – October Rust is one of my favourite albums ever, but particularly this song. It’s the way the keyboards start, really haunting and sweeping, the really painfully sad lyrics about personal loss at what should be a happy time of year. It’s the heavy, deep guitars that are really slow and dirgeful, you can just get swept away with it – and of course it’s made all the more sad by Pete’s [Steele, Type O Negative frontman] passing. A very emotive song.”

PORTISHEAD – Roads (Dummy, 1994) “My Dying Bride covered it back in 1998, but this for me all ties in with what drew me in to miserable music; it was that kind of time, I was an angsty teenager back then! With this song, it’s not the lyrics that do the damage, it’s the delivery of Beth Gibbons’ voice. It’s just heart-wrenching. The whole album is dark and despairing, but for me it’s the standout track.”

LOSS – Cut Up, Depressed And Alone (Despond, 2011) “This is on the other end of the spectrum! There’s nothing positive about the name, the album title, the song title, it is just bleak from start to finish. There’s a realness and a conviction that’s really rare, I find, a lot of music like this can be a bit contrived, but this is so genuine, there’s an atmosphere of blackness and cold, it’s really… quite disturbing.”

THE ANGELIC PROCESS – We All Die Laughing (Weighing Souls With Sand, 2007) “I absolutely love this band. It’s really thick soundscapes, there’s lots of layers, it’s the kind of thing you can listen to lots of times and always pick out something different. It’s really fuzzy and dreamlike, you can barely make out the lyrics from all the tortured screams. Again it’s another one is taken to a different level because the vocalist [Kris Angylus] ended up killing himself after an injury that meant he couldn’t play music anymore. This song is chaotic and hopeless and all-consuming, it’s a juggernaut of a song. They’re an absolute cult band, you won’t find their CDs – I saw one on Discogs going for about £120.”

PLACEBO – Without You I’m Nothing (Without You I’m Nothing, 1998) “I suppose you can get nostalgic about early favourites, but I go back to it now and it seems timeless. The sentiment of the title is quite overpowering; it’s a situation that isn’t going to end well. The way the song moves, there’s something ominous and destructive looming in how it comes to a crescendo towards the end with the lurching pace. If you’re a teenager and you’re miserable, Placebo are probably exactly where you want to be!”

LIFE OF AGONY – How Would It Be (Ugly, 1995) “It’s not instantly something that would strike you as being depressing or miserable, being more of a hardcore band, but it’s another song of personal loss. There’s absolutely no art to the lyrics, they’re almost too honest. They’re like a page from his diary about his mother’s passing. You feel his pain. I saw him do this song live, forever ago, when he started crying and couldn’t finish the song. It really came across how personal it is to him, and I don’t think they’ve played it live since.”

LIFELOVER – Mental Central Dialog (Konkurs, 2008) “A very depressing song. There’s only two lyrics, in Swedish, and they’re simply ‘I can’t find any answers’ and ‘Are there any answers?’ Throughout the song he never says it the same twice, the vocals become increasingly desperate, with gasps in between, it’s spirit-crushing but it just sucks you in, and the vocal performance feels completely genuine.”

MAKE A CHANGE… KILL YOURSELF – Chapter I (Make A Change… Kill Yourself, 2005) “This is from a four-song album, so the songs are really long and drawn-out; they really take their time. The opening song is quite slow and repetitive but dirty and raw like you’d expect from black metal. It’s brutally executed, the only aim of this song is to bring you down. And it does.”

My Dying Bride’s new album, Feel The Misery will be released on September 18 through Peaceville.