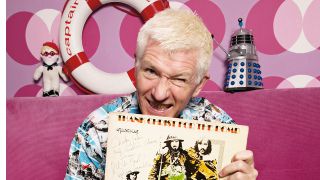 The first record I ever bought was I’m A Moody Guy by Shane Fenton, who became Alvin Stardust. I was so young that I had to get my mum to buy it. I was five years old or something. I still love that record. I found it on the internet recently and I knew every bit of it. I must have played it over and over again on the family Dansette or whatever it was, every note was gold dust. I love records like that, where every note is pure genius. I’m a huge fan of music. When I was a kid, you’d save your money up for ages before you went to the record shop, so you really had to be picky. I’d go in and I’d want Blodwyn Pig and Wishbone Ash and Traffic and Soft Machine, but which one do you choose? I had that exact decision to make and I bought the second Traffic album, the one with Forty Thousand Headmen on it. I used to walk around with my albums under my arm, posing!”

“I’m not obsessed with vinyl at all. I absolutely love my iPod now, and it’s changed everything. It’s so great to be able to take your entire record collection with you, all your favourites. You never know what mood you’re going to be in. When I go to the dentist, for me it’s always A Rainbow In Curved Air by Terry Riley. It’s perfect. It lasts as long as the treatment takes, so take that and a valium and you’re sorted! You come out of the dentist’s with a smile on your face!”

“I like prog but I don’t like 20-minute drum solos. I don’t mind a bit of widdly diddly guitar, as long as it’s interesting. That’s why I never liked Clapton! You get someone like Peter Green and he’d play a lot fewer notes, but they’d be better ones. Like Chick Corea said, it’s not the notes you play that matter, it’s the ones you leave out! So prog should be interesting, but who decides what’s interesting?

Who are the prog police? Ha ha ha! I like the Groundhogs but I can’t stand Yes. What’s the difference between them? One of them is really inspired and passionate and the other one is singing songs about fairies at the bottom of the garden. Tony McPhee is my hero. He sang about real stuff that actually means something. Thank Christ For The Bomb is an incredible album. It’s an ironic title, of course. My girlfriend is Japanese, so I had to explain that one to her!

These fucking public school wankers in these prog bands in the mid-’70s, these Royal College of Music educated posh tossers, were singing songs about absolutely nothing because they had nothing to protest about, but I want to hear people singing about real things with passion. When punk came along, it was part of the job to destroy Genesis and Yes. I wanted to see them fuck off and die. But I do like the Canterbury scene.

I like Hugh Hopper and I love the fuzz organ on the Caravan stuff. That’s where [The Damned song] I Just Can’t Be Happy Today came from. Rat Scabies was a fan of Caravan and Gong as well, believe it or not. There was an organ sitting in the studio and we decided to chuck it through my fuzz pedal to make it sound like David Sinclair from Caravan! We’ve been ripping off the prog lot for years.”

“I usually say that all the best records came out in 1970. It’s such a good year. Grand Funk Live is the best live album ever made. The bass player and the drummer create these grooves that whip the audience into a frenzy. That’s all the band were designed for. The lyrics are complete twaddle, obviously, and there is a drum solo on here, but it’s a good one! I saw them in 1969 in Hyde Park when King Crimson supported them, and they were supposedly the loudest band in the world. I didn’t think they were that loud, to be honest.”

“Everybody should check out an album by Sharks [First Water]. It’s Chris Spedding and Andy Fraser from Free, and two other blokes that no one’s heard of. What an amazing bass player Andy Fraser is! He does that Chick Corea thing. He knows all about which notes to leave out. He’d leave huge holes in the songs.

On All Right Now, he didn’t even play in the verse, he only comes in on the chorus, but then he plays the most incredible riff on the solo. You’re not listening to Paul Kossoff, you’re listening to Andy Fraser. This Sharks album is so worth getting. I probably listen to it more than anything else. Andy Fraser’s solo album is great too. It’s him on lead bass. He only plays bass solos and he’s going through this rasping distortion and it’s absolutely brilliant.”

“For me, I only like Pink Floyd up until Atom Heart Mother. Then it became bank clerk music. Syd Barrett was a genius. There are so many things that he did first. It’s not just about the beautiful songs. When he made The Piper At The Gates Of Dawn, and I say ‘he’ because the other guys were lucky to be part of it, you would go into a studio like Abbey Road and they’d all be wearing white lab coats.

When all these remarkable albums were made, the studio people didn’t understand where the music was coming from or why the musicians would disappear into the toilet every five minutes! I’d love to have been a fly on the wall at those sessions. How did it go from 1966 and Silence Is Golden to Astronomy Domine and Lucifer Sam? That’s amazing. One minute it’s trite little pop songs, no disrespect to The Move because I do like them, and then suddenly it’s genius. Syd changed so many things.”

“It’s a shame, because they’ll never have me on Desert Island Discs, will they? Cunts! Ha ha ha! But it would be so difficult to choose six tracks. I’d probably pick some Ravel to confuse them, but also A Visit To Newport Hospital by Egg, Eccentric Man by the Groundhogs, Slightly All The Time by Soft Machine, Hallogallo by Neu! and wacky stuff like that. That’d shake up those Radio 4 bastards, wouldn’t it?”