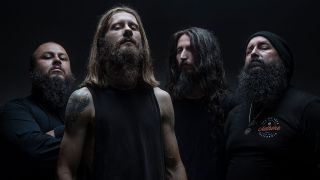 Son of Sepultura/Soulfly main man Max Cavalera and legendary metal manager Gloria Cavalera, Richie Cavalera was destined to be a metalhead. His band, Incite, follow in the footsteps of the likes of Pantera, Slayer and Machine Head – blending the New Wave of American Heavy Metal with Southwestern grooves and hard-hitting thrash.

The band's fifth album, Built to Destroy, proved to be the most successful offering of their fifteen year career, and following a kick-ass tour across Europe, the guys are off to Mexico to play Heaven & Hell festival alongside King Diamond, Amon Amarth and Manowar.

We caught up with Richie to talk to him about his very unique and incredibly special upbringing, and what's next for his own band.

Growing up with a legendary metal manager as a mum and Max Cavalera as a dad, you must have been into metal from a young age. Did you always know you wanted to start a band?

Ya it’s been there since I was born. Back in the 80s my mother started a metal bar in Arizona that had bands like Flotsam and Jetsam, Poison, and Rob Halford of Judas Priest was a regular.

The day I was born my mother brought me to the bar and Rob blessed me with the horns, so I think it was destiny to be a metal rager. Ya I was born to rock out, I would sing bubble butt all day when I was little or wanted to always play guitar. I started my first band when I was nine called Wicked Death. Metal was life.

Sepultura must have been a great influence on your music, but who else did you listen to growing up who shaped your sound?

No not really on the music side, more on the stage show part of things - I loved the energy they possessed, it was insane. I think that’s what Incite brings to the table. Killer shows that you’ll never forget and only want more of.

I listened to a lot of Suicidal Tendencies, Metallica, Megadeth - those were what I was digging when I was real little. Sacred Reich was also a huge inspiration as Jason the founding member lived in our house for basically my entire childhood. My older brother Dana also exposed me to a lot of underground metal that had huge impact on me growing up.

Were there any surprising bands or songs played at home that had an impact?

Ya but not really metal, at home it was a lot of reggae and Dead Can Dance or Chico Science - just a lot of world music. I remember Max and Dana always playing these awesome bands. It was all about exploring all music to gather different influences into the metal.

Do you prefer doing headline tours alone or touring with your whole family and supporting Max?

I love headline shows, absolutely nothing like it. We get to create the vibe and the experience of the show. I was very humbled to be able to tour with the family as I was starting this band. It gave me a lot of knowledge of the business and music side of what we do.

But I don’t see us really ever touring with them again as we’re both very busy and on completely different schedules these days. Maybe we’ll have Max open for us in the near future hahahaha.

What are the differences between going out alone with Incite and touring with the whole family?

Not really that many differences when I would tour with the family, Opposed to touring with other bands. I always threat every tour the same. Just want to rock hard, have fun, and enjoy life on the road. It’s definitely nice to be able to see people you love and would other wise miss because touring. But for the most part it’s the same as any other tour.

I hear you collaborate with your dad a lot at home, think he'd ever make it onto an Incite album?

It’s been a long time since we have done anything together. I’m so busy and he’s so busy we don’t really get to talk music much nowadays. I was blessed to be a part of some killer songs with the old man. As far as him being on an Incite album not sure. Maybe one day, we’re 5 albums in already so if it was going to happen I think it would’ve by now.

Being Max's stepson, have you ever felt pressured to mimic the success of the rest of the Cavaleras – Even if it's just been a case of being hard on yourself?

No not at all. I’ve always just wanted to do this whether my last name was Cavalera or something else. So I didn’t put any expectations on my career, just wanted to make music and play live.

Five albums and a shit ton of tours I feel I’ve done that, if I am myself and keep it real I’ll feel good cause I did it off my own back-breaking hard work, grinding from the ground up. I’m hell proud to carry on the name for another 20+ years though. Cavalera = Heavy metal.

What's the best thing about being part of such a successful and supportive heavy metal family?

Just having a family that gives a shit is lucky in this day and age. A lot of kids grow up with shitty home lives and shitty parents, I’m very lucky to have a close family and support to keep me going, it makes a world of difference to have people in your corner.

Do you think you'd bring up your own kids in this metal/touring lifestyle?

Not sure I’m really expecting to have kids, I’ll maybe adopt a kid that really needs love and a cool family. There’s too many kids in the world that need that. I don’t need to bring another consumer into this world that’s for sure. But ya he’ll/she’ll be a metalhead and tour cause this life raises responsible humans, that’s for damn sure.

Do you ever feel like you want to separate yourself from being one of the Cavaleras?

I’m a Cavalera and that will never change, I’m hyped to fly the metal flag. But I’ve done this my way, on my terms, and my hard work. It’s really just the MSM that like to make the case for the last name I possess.

Five albums in and we’re kicking hella ass and giving it our all, the metalheads see that and respect us for that. Not for who you are or what your name is. That’s why I love metalheads. We keep it real!

What's next for Incite?

It’s been a massive few years for the band, the grind is paying off. Last year we put out our new album Built To Destroy and it’s our most successful to date, along with our first appearance on Bloodstock, followed by starting 2020 with our most massive U.K./ European headline tour ever.

Shit is awesome. After we slay this tour we head to Mexico for a massive festival with King Diamond and a lot of other killer bands. We hope to return in summer - we submitted for some killer tours and festivals. Hopefully we’ll have em announced soon. Stay metal and smoke weed every day.

Incite's latest album Build To Destroy is out now via Minus Head Records.