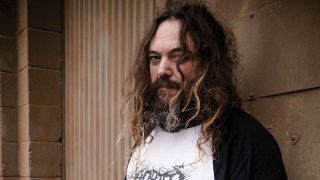 Max Cavalera is a living metal legend. It’s as simple as that. Through redefining metal with Sepultura and since kicking ass with the likes of Soulfly, Nailbomb, Cavalera Conspiracy and metal supergroup Killer Be Killed, he’s remained one of our world’s most prolific mainstays. But how will he fare fending off questions about fast food, crazy gigs and turning the big 5-0? There's only one way to find out...

When will the new Killer Be Killed album be done? Brennon Hayes, Facebook

“We have already made some demos. We’ve got about 12 new songs done, it sounds killer and way more involved. Troy [Sanders] wasn’t as involved in the first one, it was mostly me and Greg [Puciato] in the beginning, but I’m a big Mastodon fan, a big Troy fan, so I want him involved, so now he’s bringing a lot to the table. He wrote a song that sounds like old Judas Priest, it’s killer.”

Has your concept of heavy metal been the same since you started your career, back in the early days of Sepultura, or changed? Ricardo Tavares Da Silva, Facebook

“It’s been the same. I’m still a fan at heart, I feel like I’m still 15 years old again listening to heavy metal – I never grew up and I don’t want to! I don’t care how much people give me shit for it, I just ignore them. What changes is the world but we have to change with it. I’m not one of those guys who talks about ‘the glory days’ of metal – we’re living them right now!”

Do you have any more side-projects in mind for the future? Eddie Cross, email

“I have a couple of things I’d like to do. I’d like to do a thing with my kids only, they’re both really good musicians and we could be a killer power trio like Rush-meets-Venom! Ha ha! That’s one idea that would be cool. I love the idea of doing a really, really heavy project, something that’s completely on the extreme side of metal with some crazy extreme guys that’s heavy as fuck. I’ve also had an idea for 20 years to do a full-on dub record from Jamaica, get people like Adrian Sherwood involved, Ghetto Priest and some cool dub guys. I don’t care if nobody buys it.”

“It’s a good question! We eat pizza every night after shows so I’m gonna go with burger. Especially if it’s In-N-Out Burger like we have in The States.”

We had a Return To Roots. It was amazing. When are we getting a Return To Chaos A.D.? Shannon Nearl, email

“Chaos is one of my favourite records, so I’d love to play the entire record, it’d be amazing. It’s the most diverse, good songwriting, recorded in a castle, it was fantastic.”

“One of them has to be last year in Poland at Pol’and’Rock [with Soulfly]. There was 500,000 people and it was my birthday, so it was all kinds of things, like them singing Happy Birthday in Polish. The promoter gave me a special t-shirt with my birthday on the back. That show, coupled with opening for Black Sabbath in Hyde Park in 2014, because you can’t touch that. I was in awe. Jimmy Page was walking around – I must’ve died and gone to heaven!”

What is your favourite non-metal album to date? Rae Lovell, Facebook

“I have to go with Dead Can Dance – Spiritchaser; it’s by far my favourite really non-metal record, I listen to it all the time. It’s a great, moody record. Really weird, tribal sounds. Lisa [Gerrard], the singer, has an amazing voice. That’s a fantastic record.”

After decades of touring, how do you maintain your drive? Alex James Beau Adamson, Facebook

“Don’t grow up. Don’t give in. Try not to let the politics of music get you down because they can get you down sometimes. I think the purity of the passion for music itself is the best, and what I get every night from the crowd is utterly amazing, it’s like a drug. I still get nervous before shows. Having the best show is the best feeling and having the worst show is the worst.”

With the world being in such a state of confusion and decline, where do you see your lyrical direction going for future material? Brian Maloney, email

“The more screwed up the world gets, the better the music gets, unfortunately. If we keep electing people like Trump and these crazy guys that are brainwashing thousands of people and fucking the world up, we’ll keep writing protest songs and controversial songs. There’s a song on the new Soulfly record, Blood On The Street, that’s about police brutality. It’s a true story about a Navajo Indian girl who was murdered by police and nothing happened to the policeman. It’s a crazy story.”

Will you please get Nailbomb back for another album? Huw Thomas Eggington, Facebook

“I hope. I wish. I wish I could convince Alex [Newport] to do another one, but I don’t think it’s gonna happen. Alex is very hardheaded. We got the live shows, which is great, I hope we can bring that to Europe. As far as new music I have to go with the other projects.”

Do you feel any anxiety about your future now that metal isn’t as ‘fashionable’ as it once was? John McPartland, Facebook

Have you got plans to write another book? I loved your first one! Rachel Branson, email

“I’ve got to collect more adventures, I’ve got to do more shit. Nowadays it’s a little slower because I’m not drinking anymore, so the adventures are less trouble. Maybe I should go back to drinking to see if I can get more adventurous shit going on. There’s an idea about just tour stories. We may do that and that goes back to all the old Sepultura stories. There’s a lot of stuff I didn’t put in my book that I can put in a tour stories book, that’s something I’d like to read as a fan of any musician. I bet Ozzy Osbourne has thousands of great stories. I have a few that people haven’t heard.”

What skill that one of your bandmates has do you wish you had? Emma Vaughan, email

“I always wanted to be a drummer. My son plays drums amazingly, so I get jealous of that. He does something really unique that I’ve not seen with any drummer; he doesn’t play the same beat every night on different parts of songs, he changes every day, which is fuckin freaky. I don’t know how he does it. It freaks me out every night. Any night I can expect something different out of him.”

How will you celebrate your 50th birthday? Kieron Mulherne, Facebook

“The plan was to go to Nicaragua because the President’s son is a fan, but the rebels are taking over Nicaragua now. It’s fucked up. My birthday celebrations are on hold, I’ve gotta see what happens. Otherwise I’ll have to play a gig. My 49th was at Pol’and’Rock, I wouldn’t mind doing that again. Next time I could be on tour at a big festival. I’ll book it just for that.”

Do you believe any conspiracy theories at all? Sam Reese, email