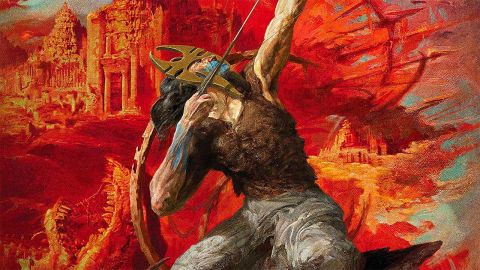 In the months leading up to its release, Soulfly frontman Max Cavalera regularly told fans that the band’s 11th album would be a “tribal thrash” LP, and one that both he and producer Josh Wilbur hoped would recapture the world music-inspired undercurrent of the groove metal icons’ lauded 1998 eponymous debut. And, initially, it appears that Ritual is going to live up to its creators’ promises, as it kickstarts to the sound of the thunderous title track with chanting and drumming in the style of the Navajo.

Furthermore, what lies between the song’s two poles can only be described as some of the best groove/death metal of Soulfly’s career to date, uniting perfectly paced rhythms with anarchic vocals and crushingly anthemic choruses. However, as Ritual proceeds, it finds itself largely ditching the tribal aspect of its opening track, only to return in isolated moments in Blood On The Street, Bite The Bullet and the jazz-flavoured Soulfly XI.

Luckily, though, what is found in its place is nothing but state-of-the-art heaviness. Max’s frenetic grunts, the skull-smashing weight of Zyon Cavalera’s impactful drumming and the thrashing lead guitar shredding of Marc Rizzo are particularly worthy of very hefty praise, each of which pack a clear passion and urgency behind them, the likes of which haven’t been felt on a Soulfly album since 2005’s embittered Dark Ages. The end result is pure, unfiltered energy: ruthless aural madness that leaps off of the vinyl that it was printed on and demands movement. Sly hints of immense industrial metal on The Summoning and Evil Empowered only add fuel to the fire, as do vicious cameos from Randy Blythe and Immolation’s Ross Dolan.

With all this in mind, Ritual might not be what most Soulfly diehards will be expecting based on the build-up the group gave it. If anything, it is probably far, far better.

For Fans Of: Sepultura, Lamb Of God, Fear Factory