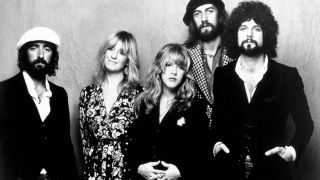 Few rock’n’roll stories are as downright weird as the strange tale of Fleetwood Mac: a 50-plus-year saga involving drug-induced madness, bitter in-fighting, a ‘fake’ band that stole their name, a bizarre on-tour disappearance, two broken marriages, at least one ruinous coke habit and the kind of bed-hopping normally seen in an old-fashioned West End farce. Oh, and also involving some of the best rock music of the 60s, 70s, 80s and beyond.

Fleetwood Mac formed in London in 1967 at the height of the British blues-rock explosion. The band was named after drummer Mick Fleetwood and bassist John McVie – partly as a ploy to persuade the latter to join – but the real star of the original band was guitarist/vocalist Peter Green. Green was so good that he’d been picked to replace Eric Clapton in John Mayall’s Bluesbreakers (where he was later joined, albeit briefly, by Fleetwood and McVie), and his innovative style would inspire future generations of rock guitarists, from Tony Iommi and Gary Moore to Noel Gallagher.

Green quit the band in May 1970, his mental health damaged by drug use. A second guitarist, Jeremy Spencer, also afflicted by drug-related trauma, vanished 10 months later in the middle of a US tour, after saying he was popping out to get a magazine. He later resurfaced as a member of American religious cult The Children Of God. And a third guitarist, Danny Kirwan, was admitted to a psychiatric hospital after being fired in 1972. A fourth, Bob Weston, was also fired after he had an affair with Fleetwood’s wife.

In the early 70s, Fleetwood Mac were in disarray. But in 1975 everything changed. Having relocated to Los Angeles, Fleetwood, McVie and his wife Christine (née Perfect, a singer and keyboard player who’d joined the band in 1970) brought in a new Californian guitarist, Lindsey Buckingham, plus his girlfriend, singer Stevie Nicks. Within two years, Fleetwood Mac were one of the biggest groups in the world, their new sound (far removed from the blues rock of old) defined by 1977’s blockbuster Rumours, the archetypal Californian soft-rock album.

Over 50 years and more than 100 million album sales later, Fleetwood Mac are still going strong – sort of. While Buckingham departed the band for the second time in 2018, under a suitably dramatic cloud of cross-words and lawsuits, the remaining members are enjoying a lengthy tour which isn't due to wrap up until late 2019. After 17 studio albums and 15 different line-ups – in which, aptly enough, Fleetwood and McVie have been the only constants – it’s likely that the strange tale of Fleetwood Mac is still to be continued.

On the simplest level, Rumours is a set of brilliant songs, beautifully played. That alone has made it the eighth-biggest-selling album of all time.

On a deeper level, these bitter-sweet, autobiographical songs spoke of the complex emotional turmoil at the heart of this uniquely dysfunctional band. John and Christine McVie’s marriage was falling apart; Lindsey Buckingham had broken up with Stevie Nicks. Nicks’s Gold Dust Woman documented the madness of cocaine addiction. She later confessed: “I curse the day I ever took cocaine.” But it was at their most fucked-up, radiating paranoia and mutual enmity, that Fleetwood Mac created their iconic masterpiece. View Deal

In the four years that Peter Green led Fleetwood Mac, they recorded just three original studio albums, plus a handful of non-album singles. The key tracks from this period have been collected on other compilations, but this 2002 Best Of is the definitive article.

Green’s influence was so far-reaching that his songs were covered by radically different groups: Santana had a hit with Black Magic Woman; Judas Priest reworked The Green Manalishi... The latter proved to be Green’s last for Fleetwood Mac. His most famous was of course Albatross, the soft-focus instrumental that remains the group’s only UK No.1. View Deal

The eponymous title of Fleetwood Mac’s first album with Lindsey Buckingham and Stevie Nicks was a statement in itself. This was a new beginning, a band redefined.

Fleetwood Mac got lucky with Buckingham and Nicks. As the latter admitted: “All they wanted was a guitarist. They did not need another woman in the band.” But Buckingham had insisted that he and Stevie were a package deal. It was one of her songs, the hit single Rhiannon that best defined Fleetwood Mac’s new pop rock style. Nicks’s other songs, Crystal and Landslide, were equally beautiful. And Buckingham’s stunning blues, I’m So Afraid, proved he could measure up to Peter Green. View Deal

Some albums are so good, so big, that the follow-up can only be a disappointment. As Lindsey Buckingham says of Tusk: “We’d made this record that was so far to the left of Rumours, and when it didn’t sell 16 million copies, that was hard.”

Tusk sold a respectable two million, but the experimental nature of this double album (typified by the eccentric title track, released as the first single!) baffled many who were expecting Rumours Vol.2. In fact, Tusk is far better than its reputation. Buckingham’s fascination with new wave inspired some brilliant left-field songs – Not That Funny, That’s Enough For Me – while Nicks’s Sara and Beautiful Child are among her very best. View Deal

What began as a Lindsey Buckingham solo album, with Mick Fleetwood helping out, eventually developed into a full-blown Fleetwood Mac comeback featuring four-fifths of the classic Rumours line-up. Only Christine McVie was missing, having quit after 1997’s live reunion album The Dance. But it really didn’t matter, as the Mac delivered their best album since Tusk.

Buckingham was the chief architect and virtuoso star of the Say You Will album, his explosive lead guitar on Murrow Turning Over In His Grave matched by the dazzling acoustic picking on Say Goodbye. Nicks contributed some fine songs too, notably Destiny Rules and Thrown Down. View Deal

The last Mac album recorded with Peter Green, Then Play On is one of the seminal late-60s rock records. Since its original release, the tracklisting has been altered four times. And although the current CD version omits three songs by late guitarist Danny Kirwan, it’s still the best original album from the Green-era Mac.

Two songs are also included on The Best Of Peter Green’s Fleetwood Mac: the swaggering Rattlesnake Shake, and Oh Well, Green’s magnum opus in two parts; proto-metal riffing giving way to Zen-like calm. And there are many more great tracks here, including two blistering jams, Searching For Madge and Fighting For Madge, plus Kirwan’s My Dream, which prefigured the soft rock of Rumours. View Deal

Fleetwood Mac’s best and biggest-selling album of the 80s followed a five-year break during which Buckingham, Nicks and Christine McVie all released solo records. Tango In The Night proved they were better off together – artistically and financially, if not emotionally.

The album was their most popular since Rumours. In the UK it topped the chart and produced three Top 10 singles, including Big Love and Little Lies. The Mac were back.

But Buckingham didn’t stick around to enjoy it, quitting the band after a blazing row with Nicks. Ten years passed before they – and Fleetwood Mac – were publicly reconciled. View Deal

It topped the US chart and produced three hit singles, but Mirage remains one of Fleetwood Mac’s most overlooked albums. And in truth it is a little patchy.

Prior to Mirage, both Buckingham and Nicks had released solo albums in 1981 – the latter’s Bella Donna was a US No.1, aided by the radio anthems Stop Draggin’ My Heart Around and Edge Of Seventeen – but they didn’t keep all their best songs to themselves: Gypsy was classic Nicks, and Can’t Go Back was another of Buckingham’s deft new-wave pop tunes. In addition, Christine McVie’s Hold Me, the album’s biggest hit, proved that Fleetwood Mac weren’t just the Buckingham/Nicks show. View Deal

After Peter Green’s departure, Fleetwood Mac lacked clear direction and drifted into relative obscurity. The six studio albums they released between 1970 and 1974 are largely forgotten. Only one, Kiln House, charted in the UK, and none broke into the US Top 30.

Mystery To Me is the best of them. It’s also the oddest and most eclectic album of the band’s entire career, mixing mellow rock with funk, reggae and even disco. American guitarist Bob Welch was at the heart of it all, writing seven of the 12 tracks, including The City, a badass white funk number worthy of Little Feat, and Hypnotized, the best Fleetwood Mac song that hardly anyone has ever heard. View Deal