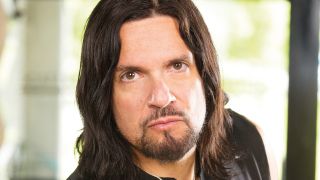 What was the craziest thing you did in the 90s?

“I don’t know what you’d consider ‘crazy’ or whatever, but it was a rough time for violence and excess. I did manage to get laid every night of an entire European tour, though. When I was a kid I couldn’t get girls, so when I joined a band that was pretty high on my ‘to do’ list. The tour was 34… 36 dates… so it was quantity not quality, but God bless Europe!”

What was the most metal album of the 90s in your collection?

“When did South Of Heaven come out? ’88? Really? Shit… I guess that is right, it was around the time we were playing the club scene. I’ll say Seasons In The Abyss then. Just Slayer, they are the archetypal metal band, full stop.”

Did you get any bad injuries back in that decade?

“Oh yeah, a whole heap. I mean, I fell off of a lot of stages and I was hit by a lot of rogue instruments, but I think the worst for me was the amount of dental work I had to have. We used to play these small stages back then and people would come flying at us and I lost count of the number of times that my teeth got smashed by the microphone. It was usually just cosmetic damage but not much fun.”

Who was the biggest party animal you hung out with in the 90s?

“Oh, unquestionably Dimebag! Just for the relentless nature of how long he’d go, how hard and how it didn’t even seem to affect his performance. You’d see him onstage and not even know how he was standing, and he’s peeling off these riffs… Come on, man!”

What was the worst thing you saw him do?

“We were playing a show and there was a wedding going on and we crashed it. Dime decided to get totally naked and throw stuff at the bride and groom while they were in the middle of their special day. He was heckling, screaming and laughing… I was like, ‘These poor people!’”

What was the best gig you played in the 90s?

“Dynamo. That festival was unreal during those days – I remember the bill and the sheer number of people that turned up. We were headlining one of the stages and it was unlike anything we had experienced before. The US is only just starting to get those festivals now, but Europe had them back then and it was incredible.”

What about the worst gig?

“Oh, we played some show at a swap meet in this… slum in California. California always has the worst shows, but this was just a derelict house in the middle of nowhere with all these weirdos turning up and just staring at us. It wasn’t even a gig really, it was… I don’t even know what it was. Ha ha ha!”

What was the worst fight you got in in the 90s?

“It was violent in those days. Your guitar was used for self defence as much as it was an instrument. During and after the show… trouble followed us around a lot…”

What was your worst drug experience back then?

“I was actually straight edge for most of that decade so it wasn’t until later that I really let myself loose with all that. To be fair I’ve never really done drugs to excess, I’ve always managed to keep it in check because I remember seeing those days in the 90s where people were not in control. We lost a lot of people back then.”

What’s the most metal photo from the 90s you can show us?

“Oh shit! I can send you a few. There’s one here where Christians are protesting our show!”

How perfect. Tommy smashes our special, 90s-themed test with style and a record-tying score. We’re not too surprised, mind…

The 90s issue: Your definitive guide to the craziest decade in metal