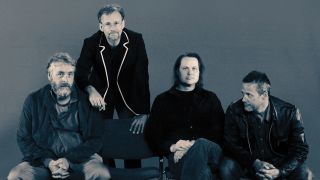 Not many bands are named after a King Crimson album, but then again, Discipline aren’t your average group. Take singer, multi‑instrumentalist and founding member Matthew Parmenter, for example. He wears mime make-up on stage, and has done so for years. And why not?

The Detroit four-piece’s theatrical sound has a befitting sense of drama, with a penchant for masterful melody making interwoven with grand, explorative journeys nodding back to the prog godfathers of yore.

Despite forming in 1987, Discipline’s latest album, Captives Of The Wine Dark Sea, is only their fifth studio effort to date. It’s a welcome addition to their somewhat skinny catalogue, with the group largely dormant in the early 2000s as they slowed things down to focus on life outside music.

“By the time we had done [1997 album] Unfolded Like Staircase, we had been playing for 10 years,” says Detroit native ^Parmenter. “Everybody had families and pressures and we were all trying to focus on multiple things at once. I think it just became a little too much. We had to take a break, and we did.”

The group returned from hibernation in 2011 with To Shatter All Accord, their first studio record for nearly 15 years, and after more live albums – Discipline are prolific purveyors of live recordings and videos – Captives Of The Wine Dark Sea was born.

“I think it took about two years to record,” Parmenter reflects. “It was difficult for us, because we had to bring in the bass player [Mathew Kennedy] from out of town. We had Terry Brown mix it. To me, it sounds really good because of Terry’s involvement. It’s the best-sounding record I think we’ve ever had, and it’s all because he’s an artist.”

The record is seven tracks of solid, classy prog fare that at times dips a toe into rock, symphonic and folk hues. Try the near 15-minute closer Burn The Fire Upon The Rocks for a tingling taster as it drifts through a myriad of passages, or the entrancing instrumental The Roaring Game. It’s both deeply uplifting yet murkily melancholic too.

Is it a fitting introduction to the group for someone who has never heard Discipline before? “I would say no,” drummer Paul Dzendzel admits. “I think there are songs on it that do not represent what seeing us live is like. But I think it’s all good. It’s a little step in a different direction.”

The band are regularly likened to Van der Graaf Generator – partly because of Parmenter’s celestial voice – while Crimson and Genesis are two other influences from the prog canon. It’s all pretty cerebral stuff too, with the expansive concept of learning being a pertinent theme on the new record.

“The first song, The Body Yearns, talks about the actual physical process of learning in the brain, and how people forget how difficult it is to learn, because by the time we’ve learned something, it seems second nature,” Parmenter says. “But it actually takes a huge investment of time. We forget that we all learn to walk and talk or do what we do, and many people learn multiple languages, but it’s not easy. All these things take time and development in the brain, and of course we now know that the brain actually changes the more that you do the thing.

“So to me, that’s sort of a song that’s actually about the process of learning. But in addition, any time you learn something, you’re impacting your memories, and I think that’s another theme in the album.”

Discipline’s initial roots reach back to the mid-1980s, where Parmenter was playing in a high school jazz band with classmates. It was, however, in the early 1990s that the group really picked up steam, performing regularly and landing shows outside their native US.

“We were serious about playing all the time, and that’s when things started to happen,” Parmenter says. “We played here in Detroit, we did our first album, and by a stroke of good luck we got invited to play some shows in Norway. There was actually a keyboard player at that time too, which allowed me to get up and put on funny costumes.”

While Parmenter released a couple of solo albums in the 2000s, Discipline stayed on the down-low during the decade. But they reformed for a slot at NEARfest in 2008 and haven’t looked back since.

They’re still impressing with their unique take on progressive rock, a genre that has stuck with Parmenter since he was young – all thanks to his older brother.

“I love Van der Graaf Generator, but I don’t consider them an influence,” he says about the comparisons. “I understand that I sing a lot like him, and I love that band. I was really grateful when I discovered them through another band that we played with, Anekdoten. They said, ‘Oh, you must love Van der Graaf.’ But we’d never heard them, and they turned me on to them.

“As far as influences go for me, I would say as a songwriter, I’m influenced by early Genesis, Yes and King Crimson. I was very influenced even by Gentle Giant as a young person. I had a brother who was 12 years older than me, and he played me a lot of that stuff when I was a five-, six-year-old kid.”

“I was brought up on jazz and early rock’n’roll,” Dzendzel counters. “I really didn’t know what progressive music was. My brothers had some ELP albums and that kind of stuff, but I gravitated towards that as a kid because of Carl Palmer. But I never listened to Van der Graaf Generator or Gentle Giant or any of that stuff. I didn’t even know who they were until I got involved with these guys.”

And then there is Crimson. The group’s 1981 effort Discipline saw Robert Fripp and co veer away from their career-defining 70s offerings, and it struck a chord with a young Parmenter after he saw the icons on TV.

“When I got into junior high and high school, I started hanging out with people and they’re playing new wave for me, and we got into punk rock. We even started playing some punk rock in high school,” he says. “But then at some point I saw King Crimson on television. I did not know them as a child.

“I saw them play music off the Discipline album and I thought they were a new wave band. I said to my brother, ‘I found this new wave band, you’ll really like them. They’re called King Crimson.’ He laughed at me, and then proceeded to show me all the old albums that they’d done. That helped me find my roots a little bit.”

It’s probably fair to assume that 70s prog’s theatricality, often linked with the likes of early Genesis, also had an impact on Parmenter and Discipline. The musician proudly wears mime make-up on stage and is adept at tap dancing and juggling too. He’s a creative all‑rounder, a seeming tour de force of artistry.

“I actually took mime classes as a young person, and I’m not joking,” Parmenter smiles. “I did tap dance and I did juggling. I don’t know what my parents thought. Maybe they thought I could work in a circus.

“The mime thing came about when I went to a party one time, a Halloween party, and I dressed up as a mime artist. It was in the late 80s, early 90s. And it sort of stuck, so I started wearing it on stage. I was already sort of doing some theatrical stuff on stage, and it just really helps to separate the singer from the person; the actor from the person.

“It feels theatrical, and for me, it also feels more powerful when I’m doing it. I’m a pretty gentle person, but when I perform, I have to take on these roles of some villainous types and aggressive personalities that I normally might subjugate in the day-to-day. So putting on a mask is a helpful way for people in general to express different parts of their psyche, and that’s something that’s been going on for thousands of years.

“It’s sort of silly,” Parmenter continues. “For as long as I’ve been doing it, there’s always somebody that says, ‘Why do you do that? Why don’t you stop doing that?’ I guess I like it too much to stop.”

Captives Of The Wine Dark Sea is out now via Laser’s Edge. See www.strungoutrecords.com for more information.