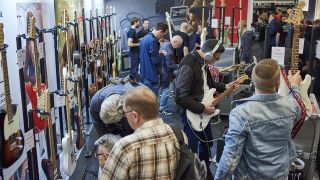 The UK Guitar Show and London Bass Guitar Show are right around the corner, with those in attendance guaranteed a weekended to remember.

The event will take place at London’s Business Design Centre on September 21-22 and it’s a must for lovers of all things guitar and bass.

Want to know what’s in store? Here are seven reasons why you really can’t afford to miss out on what is sure to be a magical weekend.

Gear Galore
Prepare to drool over equipment from some of the biggest and best names in the business, while you’ll also be able to get hands on time with the instruments.

From top brands such as Fender, Martin, Blackstar, Faith, Peavey, Marshall, Ibanez, Ernie Ball and Orange, through to independent brands, there will be something for everyone.

Improve your Groove
A range of masterclasses and workshops will be held over the course of the weekend on a variety of topics. No matter if you’re a beginner or seasoned player, they’ll be something to learn.

Lead by experts from Justin Sandercoe and Andy Guitar to Steve Lawson and Phil Mann, they will cover everything from Blues jamming to surviving as a musician on the road to breathing new life into your playing style.

Guitarist Of The Year Finals
Watch the exciting live finals of the Guitarist, Acoustic Guitarist, Young Guitarist and Bassist of the year competitions! Powered by the likes of Ernie Ball, Takamine, Orange and PRS Guitars, they will be judged by an all-star panel, while the finalists battle it out to be crowned 2019 champion then and there on stage.

Vintage and Rare Gear
Get up close and personal with golden gear from Seven Decades in the Vintage Zone! The nine-piece band will also perform live with George Harrison's Futurama guitar on both the Saturday and Sunday at the show – sets that are not to be missed as the guitar will be played live for the first time since 1961.

Mini Gigs and More
We're setting the tone for an amazing show experience by giving you great mini performances before you've even entered the event. Keep an eye out for details on our exclusive after hours event on Saturday night too – details of which will be revealed in due course.

An Unforgettable Weekend
What could be better than hanging out with fellow guitarists and being surrounded by nothing but the best gear, artists, instruments and experts out there?

No matter your age or ability, you don't want to miss this year's UK Guitar Show and London Bass Guitar Show. Grab advance tickets while you still can. They’re available until midnight on September 20, after which full price ‘on the door’ tickets will go on sale.