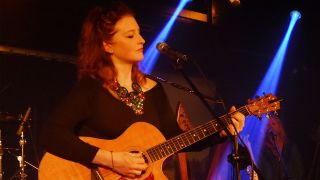 Heather Findlay has streamed the title track of her new seasonal album, I Am Snow, with Prog.

The nine track release, which Findlay describes as a “fireside,candlelit, winter companion”, can currently be pre-ordered from Heather’s website, is on general release from 9 December. Alongside the title track, it features a cover of Foetheringay’s Winter Winds, new takes on Mostly Autumn’s The Eyes Of The Forest and Shrinking Violet, and Day Thirteen: Sign, which she co-wrote with Arjen Lucassen, alongside five of her own songs.

The Heather Findlay band will be supporting Touchstone on their forthcoming Christmas dates,as well as headlining their own Christmas Special at York’s Crescent Club, with Odin Dragonfly as support on 21 December. The full dates are: