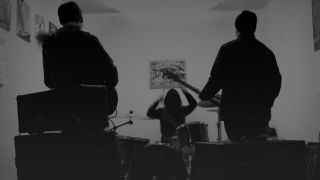 Devoted underground purveyors of doomy riffs Haast’s Eagled are premiering their new album for II: For Mankind exclusively with Metal Hammer. If you love destructive sludge wrapped around powerful, sledgehammer guitars then stick this in your earholes.

But what is the album all about? The band are named after an extinct species of bird in New Zealand, but that doesn’t explain the music. Luckily the band are able to explain all!

“We had to think of a name for a character in a story about an ethereal being that teaches a new way of understanding the elements, to help mankind survive on this dystopian planet we now live on. Maybe it is god. Code named O. Bhaji, this eventually became Pyazz Bhonghi as it’s working title was ‘The Song We Can’t Call Dopesmoker 2 For Legal Reasons.”

“This is about paedophiles working within the BBC. Thanks to Radio 1 for playing this the other week.”

“This is about a time travelling mad man who wants to kill himself, which in turn ends the world and destroys the space-time continuum as we know it. Also it’s the freaky, horrible marionette that turns all young children into 1980’s Tom Hanks. We wanted to add something extra to this song, so we asked Adam’s [Wrench, guitar and vocals] friend Josh Jones to get involved, and he played the ace Pink Floyd solo. To be honest, we just ripped off all the bands and artists we love and listen to. It’s not a secret. The entire record is our homage to them.”

“White Dwarf is our ode to the end of all things. When the end of the world comes, how to do you want to die? Who are you going to die with? Do you even care? Does anyone care about you? It’s all pointless in the end, isn’t it? We used an old reel-to-reel tape machine to bounce the end of the track into, and that worked out quite nicely. Our engineer Phil is intent on making the end of our records as sparse and epic as possible, and it was his idea to add this into it. We’re always happy to take his advice. He sorted us out no end. Thanks a lot Phil!”

II: For Mankind is out May 27, via Holy Roar Records.

Why Holy Roar Records still fight for the underground